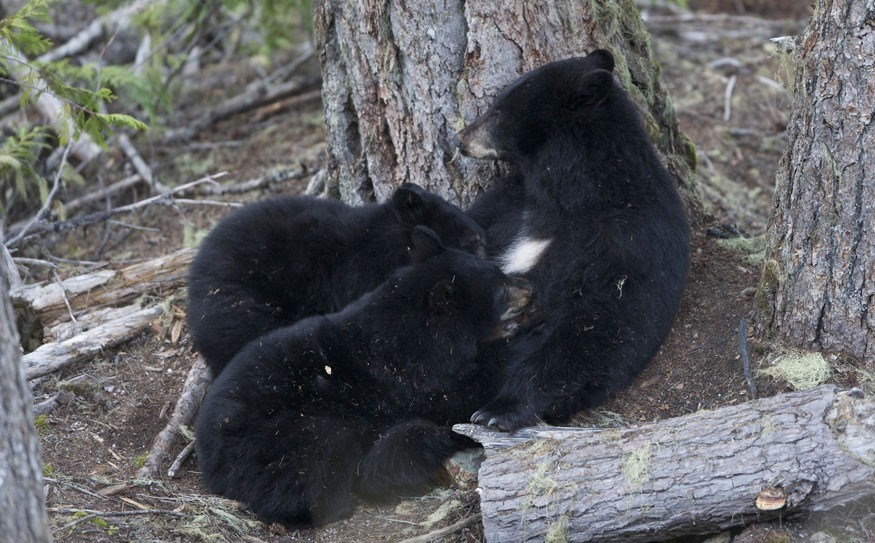 Bears are starting to forage in Whistler in greater number now as warmer weather arrives.

In Whistler, mothers do not normally nurse yearlings because moms are usually too lean after hibernation.

Olivia, in the prime of her life, is in exceptional condition this spring, which allows her to supplement her young before they are pushed away late in June.

Many of these males move through valley to graze on golf courses and pursue females outside of ski area.

There are at least another 10 different bears in valley. June signals the start of the breeding period and triggers aggression in males to kill new cubs to force mothers back into breeding cycle. Females normally breed every second spring. So far, three of 11 cubs have been lost to males.

June will be stressful on mothers because over half of females have cubs. Alice, an old female on Blackcomb lost her only cub. Mya, a new mother on Blackcomb, lost one of her two cubs, and Amy, a tagged brown mother lost one of two cubs at the edge of Lost Lake Park. Brownie on Creekside is the only mother to have separated from her yearling.

Family break-up continues through June. With the milder spring, the berry crop is on track but has the potential to be pre-mature if June turns hot.

Many bears will be moving upslope through June as mountainsides green-up. Whistler's bear population is much smaller now and it's important to keep it healthy.

Store garbage and recycling inside, clean barbecues after use, and do not use bird feeders. Keep dogs leashed around bears and respect bear space by staying back 30-m/100 ft.