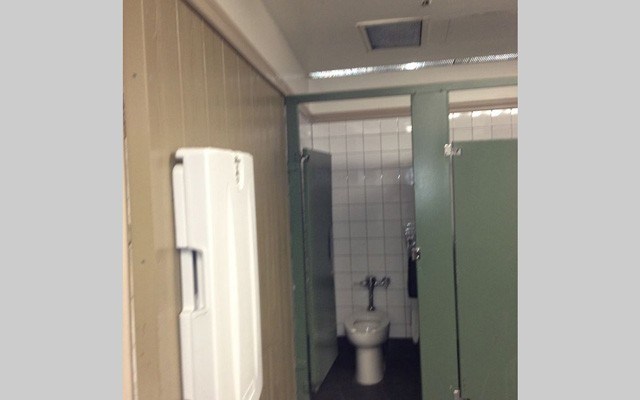 PEEPING TOM A 27-year-old North Vancouver man was arrested for voyeurism Sunday, July 20, after a woman reported finding a camera phone secretly filming the toilet from a ceiling fixture, seen above right, in the washrooms at the Carleton Lodge. Photo submitted

A 27-year-old North Vancouver man has been arrested after a woman found a camera phone recording her while using a public washroom in Whistler’s Carleton Lodge.

The woman entered the stall after leaving a nearby bar at around 1 a.m. on Sunday, July 20 and noticed the phone’s illuminated screen and red light indicating the camera was recording. The phone was placed in a light fixture located above the toilet and had been recording for approximately three minutes, the Vancouver woman said.

Police tracked down the suspect at a Whistler hotel, where he was arrested for voyeurism and held for court.

“I’m so bothered by what happened,” said the woman, who spoke on condition of anonymity. A regular weekend visitor to Whistler, the woman said the incident would not keep her from returning to the resort.

“It’s so creepy and traumatizing knowing that someone would go out their way to do this. I don’t know what happened in (the suspect’s) life that was so bad that this is the path he chose,” she added.

With the help of a friend, the woman was able to retrieve the phone and said she texted the suspect’s family to notify them of the incident before turning the phone over to police. The woman also posted about the incident under a pseudonym on the popular Whistler Buy and Sell Facebook forum to alert the community.

“Women should be aware of their surroundings and look for things that don’t seem right and report them,” she said.

The suspect was seen in security footage attempting to place the phone in the ceiling fixture for over 30 minutes, occasionally running to and from the men’s and women’s washroom, as well as a parkade, according to the woman, who said she viewed the tape.

“This is a one-off, very unusual event, but people are reminded to exercise normal caution and be aware of their surroundings,” he said. “This is... not a common occurrence in any establishment.”