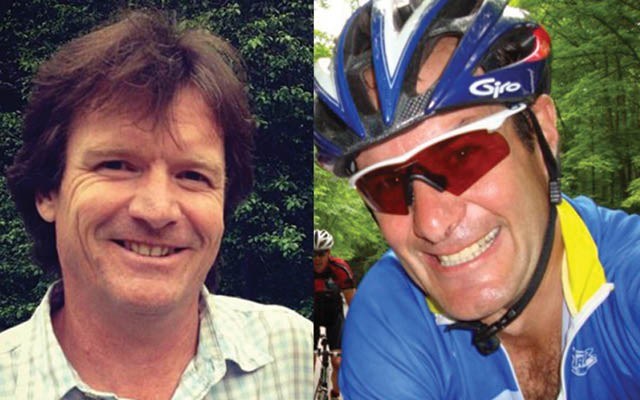 In 2015 a vehicle crossed the centre line and struck two cyclists — Kelly Blunden and Ross Chafe — killing them. file images

The driver linked to a fatal collision that killed two Whistler cyclists and a passenger has been denied bail.

The reasons for the bail being denied and the submissions made by lawyers cannot be reported due to a publication ban — common in Canada for bail hearings.

The Lillooet man is alleged to have been driving a Chevrolet Cavalier along Duffey Lake Road on May 31, 2015 when the vehicle crossed the centre line and struck two cyclists — Kelly Blunden and Ross Chafe — killing them. Pemberton's Paul Pierre Jr., a passenger in the vehicle the accused was driving, was also killed.

Alec has been in custody since his arrest in August 2015 on three counts each of criminal negligence causing death, impaired driving causing death and driving over the legal blood-alcohol limit. He was also charged for failing to remain at the scene of the accident.

The families of both Blunden and Chafe have launched separate civil suits against Alec seeking unspecified damages. Both suits allege that Alec's negligence contributed to the cyclists' deaths.

A Christmas tree was allegedly taken from an Upper Village business last week, the second time an evergreen was reportedly stolen this holiday period.

On Dec. 15, a caller notified Whistler RCMP of a tree that went missing from a business in the 4200 block of Blackcomb Way. The caller said the thief entered the lobby and took the tree sometime between 11:55 p.m. the night prior and 2:05 a.m. The caller also stated they saw pictures of the unknown suspect sitting on the bus with the decorated tree. Pique can confirm a photo posted to Whistler Winter Facebook group matched this description.

Another Christmas tree was reported stolen from a Creekside business earlier this month.

A man is facing charges after he allegedly became aggressive with staff at a village business and refused to leave the premises, police said.

At approximately 11:15 p.m. on Dec. 17, officers on foot patrol were flagged down by staff, who said an "intoxicated, aggressive" male was refusing to leave the building and "trying to instigate fights."

The man was reportedly uncooperative with police. He was arrested and placed in custody until sober, police said.

Whistler RCMP is investigating a report of a broken window at a village business this week.

Just before 9 a.m. on Dec. 18, police were notified that a window had been smashed at a business in the 4200 block of Mountain Square.

Police were eventually able to identify and arrest the suspect thanks to video surveillance footage.