Man survives night in the backcountry 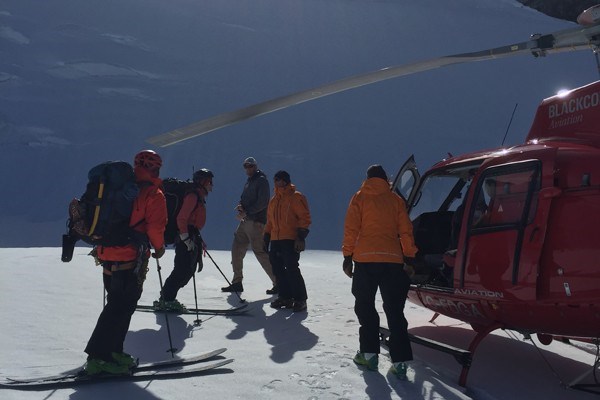 ANSWERING THE CALL Whistler Search and Rescue members search for lost ski tourers on McBride Range in Garibaldi Park in May. Photo by Brad Sills

A close call in Whistler's backcountry is prompting new reminders from Whistler Search and Rescue (WSAR).

Conversations between the man and his friends via two-way radio indicated he was likely outside the ski area in an area stretching from Harmony to Khyber Pass.

With temperatures falling to below -22 C, WB patrol attempted to contact the man via radio at about 10 p.m., but got no response.

At dawn, 14 members of WSAR, five members of WB patrol and two members of the RCMP initiated a full response with helicopters, snowmobile teams and skier resources. At 9:30 a.m., the man was found unresponsive near the Cheakamus River.

The man — who was without a hat or gloves when he was found — was stabilized for immediate helicopter long line rescue and transferred to a second waiting medi-vac helicopter, which took him to the Whistler Medical Clinic where he was treated for hypothermia.

"I mean, it was as cold as it ever gets around here, and he had fully immersed himself in the river. He had broken through the ice and fallen right in and he was essentially a human popsicle."

Sills said he believes the man is a student somewhere in the Lower Mainland.

The incident serves as a stark reminder for everyone heading up the mountain.

"Even when you're skiing in-bounds and you get that inkling to go out of bounds, you really need to be prepared, because things happen," Sills said.

"Things change and suddenly you're out there by yourself, so you really need to have that extra sweater in your pack and a tarp or something to keep you dry."

Sills recommended people visit www.adventuresmart.ca for more information on how to be prepared.

With the avalanche forecast trending toward considerable, it's time for everyone to really evaluate the terrain they're planning on tackling, Sills said.

"So keep your eye on (www.avalanche.ca) and learn more about snowpacks, and be prepared when you go outside."

The Dec. 14 incident was the first big call of the winter for WSAR, and it tested the training of some of the organization's newest members, Sills said.

"They gained just a huge amount of experience from this single call, because it was so immediate and requiring of all their skills," he said, adding that it's never an easy call to make when you have to leave someone in the backcountry overnight.

"You just can't commit people to that kind of terrain without any known location," he said.

"You're just encountering risk after risk at night time when you can't even properly assess it, so our safety comes first unfortunately."

Each year, WSAR responds to over 50 calls for assistance, and at least a third of them result in life changing injuries.

When a situation escalates to a point where your capacity to respond to it effectively has been exceeded, do not hesitate in calling 911 for assistance.

When calling 911, it is critical to state, "this is a backcountry rescue requiring search and rescue," as requesting an ambulance will lead to further delays.

State the nature of your emergency — medical, lost person, etc. — and number of people.

It is also critical to know how to pull the GPS coordinates off your smartphone for the 911 operators. Coordinates should be in the degrees, decimal, minutes format.

Once you make the call, do not move from your location, and avoid using your phone to preserve the battery.

If you call late in the day, there's a good chance you will be overnighting in the backcountry.

The best possible plan is to be prepared before you head out.