Mandatory registration for off road vehicles pushed to Nov. 1 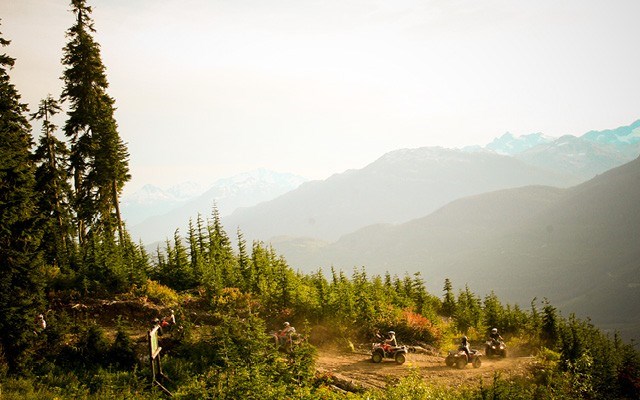 TIME TO COMPLY Mandatory registration for off road vehicles has been pushed back to Nov. 1. photo courtesy of canadian wilderness adventures

Owners of off-road vehicles (ORV) have an extra six months before mandatory registration kicks in.

Last week, the provincial government announced it has extended the deadline for mandatory ORV registration from June 1 to November 1.

But for commercial tour operators, mandatory registration has been getting a lukewarm reception.

"It's going to be a costly endeavour administratively, and also just with the cost of licensing the quantity of machines that we have as a big operator."

Registration for ORVs is currently set at $48 a vehicle.

But if the province is able to properly police the use of ORVs, registration could prove positive for everyone in the long run, Beattie said.

"It really depends on how the conservation officers are going to be out there and policing it," he said.

"I think if they have that ability to be out there more and go to all of the familiar riding areas I guess, then yeah... overall I believe it's probably going to positive."

A spokesperson for the provincial government said regulations around ORVs are still being finalized, and details about enforcement will be clearer closer to mandatory registration in November.

Peter Busink, acting inspector for the south coast region of the Conservation Officer Service, said the COS are out in the fields and on the forest service roads frequently, "which means that we're going to be running into vehicles that meet the definition under the ORV Act, and we're going to be making sure that they're properly registered and that they're abiding by all the requirements under that legislation," he said.

"And if they aren't, then of course we will act accordingly, and there is provisions for violation tickets under the act."

Paul Button of The Adventure Group Whistler agreed that there are some definite positives with registration.

"From the outside looking in, it seems like a good thing," Button said.

"Whether you're a conservation officer, policeman or an ICBC officer, you can access the database 24/7, 365 (days a year), so if there's ever a stolen machine or anything like that they can access it quickly and easily. The other laws are just designed to make it safe for juniors and kind of create a standard."

The provincial government estimates there are 200,000 ORVs being used in the province, 20,000 of which have already registered under Bill 13.

Like Beattie, Button expects to incur some additional costs as a result of Bill 13 — but he believes the positives will outweigh the negatives in the end.

"A lot of people see the government's moves as negative just because it's the government, but apart from the red tape on this one and the additional costs... it's not too bad," he said.

"It just seems like the government is being diligent. Some changes are good and some are bad, but I think generally it's actually OK."

According to a provincial government press release, an ICBC-issued numbered sticker will be available in the early fall when registering an ORV.

The Off Road Vehicle Act can be found online at leg.bc.ca.