Many failing to heed physical-distancing practices in Whistler and beyond 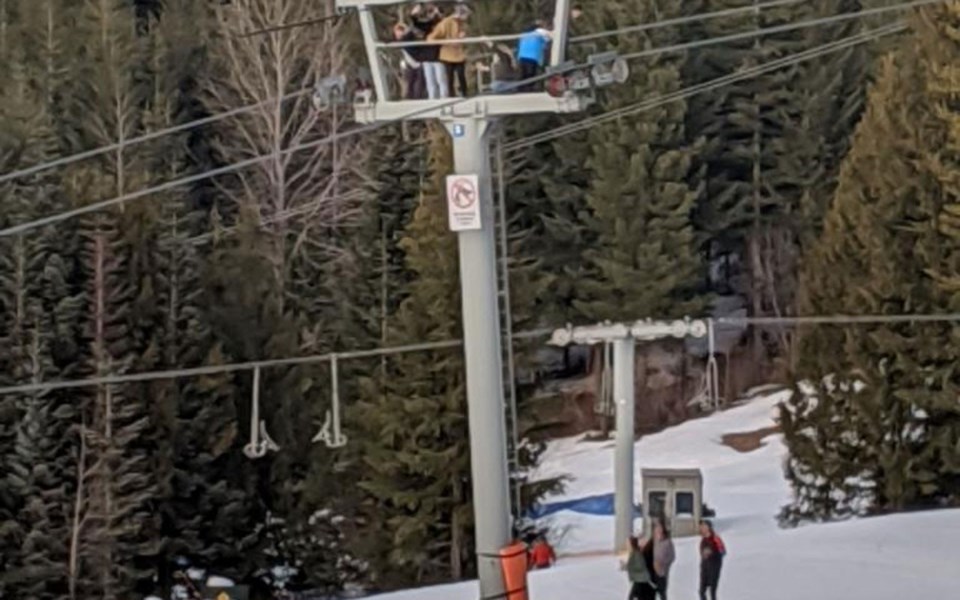 Even at a time when physical distancing is important, there was a large party on Blackcomb Base II on March 17. Photo by Winston Partridge

Winston Partridge had just finished enjoying some warm, slushy snow just above the Coca-Cola Tube Park during a quick post-work snowboard session when he heard the chatter.

Any other time, it wouldn't have raised an eyebrow, but on St. Patrick's Day (March 17), in the midst of the COVID-19 pandemic and with near-constant reminders from health officials on the importance of practising physical distancing, the party at Base II around 6:30 p.m. that night was a shocking sight to behold.

Ensuring that he kept his distance, Partridge posted photos and videos to Instagram stories. His stories depicted a large group congregating near Base II, some revellers climbing onto the roof of a storage shed with a ladder, clambering up the ladders on the Magic Chair's support towers, and two people riding down a bright yellow Big Boggan before jumping out. While unsure of the exact number of people there, Partridge felt confident saying it exceeded the ban on gatherings of more than 50 people instituted by health officials on March 16.

"I was hiking just above the tube park and I could hear a bit of a commotion from probably about a half-hour before. When I got down there, I just saw that situation. It didn't seem too wild when I first walked down, but when I started walking away and people started taking ladders, that's when it really seemed to get out of hand," he said.

While Partridge stressed that the gathering was irresponsible, he understands why the young folks would want to blow off some steam giving their potentially precarious employment and housing situations, with some of the partiers possibly getting set to leave their friends Whistler in short order. As he got a different look from his car in Lot 7, though, the recklessness and vandalism he witnessed was "chaos."

"I didn't really want to get too close to interact with anyone during the circumstances," he said. "They really weren't exercising social distancing in any way, shape or form."

Partridge added that he saw one Whistler Blackcomb security truck enter the parking lot while he was observing the situation. He saw the truck pull partway into Lot 7 before turning around and leaving. He's unsure of whether the driver didn't see the extent of the party, or if it went looking for more help. Partridge said he did not contact authorities because he had a feeling the gathering would be shut down in short order.

While not intended for a massive audience, a copy of Partridge's stories—complete with his user name—was posted in the Whistler Winter 19/20 group on Facebook, generating more than 600 comments and leading to some users to message him directly.

"There were a couple people that messaged me just saying that they couldn't believe what they were seeing, and then one person was calling me out ... they pretty much just called me an idiot for being involved," he said. "They didn't really feel inclined to believe me [that I wasn't], but it's not really something that I'm going to get worked up about."

Also on St. Patrick's Day, Whistler RCMP caught wind of a gathering of roughly 200 people at Alta Lake and showed up around 5 p.m. Officers consulted with the Ministry of Health, and in addition to being concerned about the lack of physical distancing, were also wary of the warm weather and the ice thinning.

In a release, RCMP Sgt. Sascha Banks said that officers warned the partiers that they were putting themselves at a health risk, but the crowd did not disperse for "a number of hours." The release also said that many in attendance were drinking liquor and several were intoxicated.

In a follow-up interview, Banks said responding officers remained on site until the partiers dispersed.

"They were trying to deal with a large, large group of people and then [also had] people who were intoxicated," she said, adding that some partiers had set beer boxes on fire. "There was a recommendation that we talk to people and said, 'You should be dispersing based on social distancing and the current pandemic that we're under.'"

While police are able to recommend physical distancing, at this time, they cannot enforce it, Banks said. However, she added that police foot patrols have increasingly been attempting to disperse public crowds through the recommendations. The RCMP will take its cue from the ministry if any further steps need to be taken.

While RCMP did not respond to the Base II, Banks said police have recently been called to "multiple large gatherings," including several on St. Patrick's Day, with no concern other than for the number of people in attendance.

"That shows the Whistler community in general, just being concerned for the community at large," she said. "You have a lot of seasonal workers that now are out of work, and you have a large tourism base.

"It's obviously part of the culture of Whistler in general, being there and having social gatherings, and I just think the messaging is taking a little longer to get across."

Banks said that since officers interact with the public, they are at risk for contracting the virus and are taking precautions not to pass it along as well.

"Our own officers are getting sick, whether or not it be COVID, we don't know, but we do have [a policy] where if you do come down sick, you're on an isolation period until you get better," she said. "We are in the public and we are exposed to the public, and down the line, depending on how heavy it hits our people, we'll mitigate how we do respond to calls."

Banks added that might eventually mean police respond via phone to calls to things they would have shown up to before, such as fraud calls or break-ins to an unlocked car.

She added that if the force faces staff shortages down the line, there are contingencies in place and the local detachments could potentially draw on staff in other locales that haven't been hit as hard.

Banks requested that any member of the public who is feeling symptoms or has other risk factors such as having travelled recently discloses that information on the call so the responding officers can adequately prepare by donning personal protective equipment.

"In our job, we sometimes don't have the ability to do social distancing when we're dealing with individuals, depending on the circumstances and the situation. With that comes an extensive risk to our members if they're not protected in the way they need to be protected," she said.

As well, RCMP offices in the corridor are closed to the public for services such as fingerprinting and criminal record checks.

Meanwhile there was initially some hope that some recreational opportunities could be salvaged in the region.

In Pemberton, the Village of Pemberton (VOP) posted to its website on March 18 that it was considering closing the local skate park as visitors were not engaging in proper physical distancing. Though skaters started heeding the message initially allowing it to remain open, with an influx of visitors into the community over last weekend, the VOP announced on March 22 that the skate park, as well as all public playgrounds would be closed. It encouraged strata playgrounds to close as well.

"While there was quite a number of people from out of town coming into our area, using the parks and trails and campgrounds, they were doing so not with the recommended social distancing measures from the health authority," Pemberton Mayor Mike Richman said, nothing that visitors were also buying up supplies from local stores that might be required by locals.

"We've taken a few measures like shutting down our playgrounds [and skateboard park], like other places have, to try to prevent gathering spots. But I'd say overall, residents of Pemberton are being quite careful."

Social-media postings show that it's not just the Sea to Sky failing to get the message, as sun-seekers pack beaches everywhere from Vancouver down to Miami, Fla.

Stephen Hoption Cann, a clinical professor at the UBC School of Population and Public Health's Faculty of Medicine, said despite clear and constant messaging about how to avoid spreading COVID-19, a large portion of the population is going against the recommendation.

"One of the key challenges is that despite all the public health announcements and media coverage that people should self-isolate, there are still people with cold symptoms going out in public or mixing with friends and family spreading a highly contagious virus," he wrote in an email. "Thus, knowing that those carrying the infection are out there, one must be on their guard to avoid the illness. Any situation where there is a density of people—meetings, social gatherings, line-ups, sporting events, etc.—place one at risk."

Hoption Cann reiterated maintaining at least two metres (six feet) of distance from the next person if you are unable to avoid public situations. Anyone who feels the symptoms of a cold must self-isolate, he said, while he hammered home that it is important to thoroughly wash your hands and refrain from touching your face.

In the end, Partridge had mixed feelings about having posted the Base II video after seeing the public response.

"It's good for people to see, but at the same time, it really causes panic as well. This is a time where we all need to be working together and working toward the greater good," he said. "It wasn't meant to shame anybody. Obviously, we should be doing things better, but you can't tell people how to live their lives, as much as you'd like to."

-with files from Joel Barde