Mass demonstration in Whistler not so massive 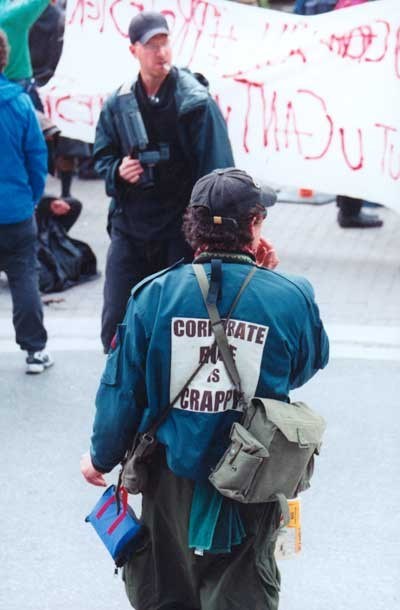 The worst never came last weekend, although the RCMP was certainly prepared for it.

Approximately 150 protesters assembled in Whistler last weekend to protest the Pacific Northwest Economic Region conference at Whistler’s conference centre. The activists ran the gammut from First Nations representatives, to anarchists, to anti-globalization forces, to private sector unions, to the Communist Party of Canada.

Aside from a few scuffles, 11 arrests, and one case of a protester being pepper sprayed, the RCMP are calling the weekend a success.

"We feel in went very well, that we successfully balanced the rights of those attending the conference with those who protested the conference, with the goal of protecting everyone in Whistler: visitors, protesters, police, and media," said Constable Ray Bernoties of the Whistler detachment. "We were successful in ensuring there was no property damage as a result of the protest, and we’ve received a substantial amount of positive feedback from the community."

The local police force was bolstered by crowd control and emergency response teams from Vancouver, as well as negotiators, canine units, and a police helicopter. According to Sergeant Grant Learned, a spokesperson for the RCMP less than 150 police officers provided security for the conference, including 125 uniformed officers, and a number of plainclothes and support officers. "The total cost has not been established yet as some sections still have to submit their numbers," said Learned. "We hope to have those numbers by next week."

Despite the fact that there were roughly as many police officers as there were protesters, Bernoties said the RCMP geared the response to the numbers they expected.

"We had to prepare for the worst," said Bernoties. "It’s not the majority of protesters we’re concerned about, but a small group that is prone to running around and causing the damage and the violence that you see at other protests."

He said the RCMP was also led to expect 500 protesters were coming from the city, but only 80 made it for the main protest on July 28. Others arrived earlier in the week, but there were no problems to report.

One protester, already known to the police after being arrested as part of an earlier protest at Melvin Creek, was arrested before Saturday’s protest for wearing camouflage, which was violation of his release conditions.

Three more protesters were arrested around 1 p.m. Saturday when the activists that had just arrived in Whistler by bus attempted to enter Whistler Village through the entrance by the taxi loop. The RCMP had established an area for the protesters in Parking Lot 3, by the conference centre, and blocked other routes.

The actual demonstration in the parking lot lasted less than an hour, with short speeches by First Nations representatives from Melvin Creek and Kamloops. The First Nations speakers were concerned that free trade, one of the topics discussed at the PNWER conference, amounted to giving the province away to corporate interests even though B.C. is, in their words, unceded territory, and no treaties are in place with First Nations.

Garth Mullins, a spokesperson for Vancouver-based Democracy Street and a veteran activist, also spoke against PNWER.

"The governments and the business people in that meeting want to create a regional trading bloc in the Pacific Northwest," Mullins said. "Right now it’s on a smaller scale than NAFTA, but it’s the same thing – it’s free trade, and it affects all of us."

At the core of protesters’ beliefs is the idea that the PNWER is somehow connected to the World Trade Organization, although PNWER executives deny any connection. They claim that PNWER was created to deal with regional issues, including the economy, and as a forum for governments and businesses to discuss best practices.

The police detained a few protesters following the speeches, which quickly turned the attention of the demonstration away from the PNWER conference at one end of the parking lot to the RCMP at the other end.

There was no clear leader among the activists, and the situation quickly turned into a standoff, with tactical teams assembled with pepper spray and tear gas launchers.

Anne Jamieson, 56, of Vancouver said she was sprayed in the eye at close range. She says she wasn’t involved in the scuffle, but was caught up in the surge of people that moved towards the police when the incident occurred.

"I couldn’t move out of the way in time because there were people behind me, and the next thing I knew someone sprayed something directly into my eye," she said.

The police medics attended her first and told her she was under arrest, but she was released to be attended to by the protesters’ first aid crews.

After that incident, the protesters grouped together and attempted to march on the local RCMP station where the 11 protesters that were arrested were being detained.

The police closed Village Gate Boulevard to traffic allowing the group to march down the street as far as Blackcomb Way, then prevented them from turning either left or right at the intersection. They were told they could return to the parking lot or to the buses, but would be arrested if they stayed in the intersection.

After some debate, the group moved off the road, and the protest broke up shortly afterwards.

Some of the protesters allege police intimidation in the days leading up to the protest, and one activist from New Westminster said he was pushed over and cut his hand on the village cobblestones for not vacating a secure area quickly enough.

Murray Lamb, a representative from the Communications, Energy and Paperworkers Union of Canada said the police were polite and accommodating for the most part.

"We haven’t any problems for the most part," he said. "My interest here is labour. I’d hate to seen any more Canadian jobs go south as a result of all these little trade deals."

According to Tourism Whistler president Suzanne Denbak, the protests did not have an impact on the conference.

"I don’t think it did. It was a successful conference, and many of the delegates said they enjoyed Whistler and that they wanted to come back in the future," she said. The noise outside didn’t disturb the conference.

Of the 11 people who were detained by the RCMP, six were arrested for a breach of the peace and released by 6 p.m. on the same day. They ranged in age from 18 to 43 years.

The other charges were resisting arrest and one person was charged with assaulting a police officer. All were released by 8 p.m. on the same day with a promise to reappear in Provincial Court in Squamish to face charges.