"Girl bears have a knack of keeping the often troublesome boy-bears in Whistler out of trouble."
Jun 9, 2006 2:13 AM By: Michael Allen 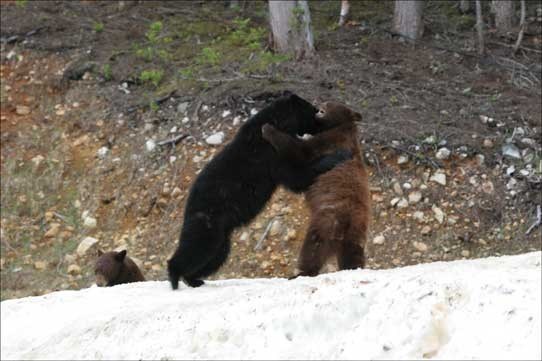 Girl bears have a knack of keeping the often troublesome boy-bears in Whistler out of trouble.

Since May 23 when the first pair of bears were observed, 27 courtships and/or social interactions have been observed. June marks the peak breeding period, with late July ending the social season.

The spring bear count (May-June) for Whistler-Blackcomb ski area – including bears using Fairmont Chateau golf course all the way to the west side of Whistler Mountain – is 37 animals (14 males, 23 females) with another five bears unidentified. I can't keep track of bears in the valley any longer as the RMOW bear research team have replaced my efforts.

Bears have begun to pull away from valley bottom and graze the new green-up to 1,100-metres elevation, especially on warm days. In addition to easily digested new greens, bears are beginning to spend significant amounts of time in cutblocks tearing apart rotten logs and tree stumps for carpenter ants.

The key summer berry crop has berries in various stages of development: from berries in 3/4 swell, meaning berries are almost full size and need coloring from high UV days, to plants that are just dropping flowers. Usually a nice balance of weather is needed to yield a full large-diameter berry crop, but this late spring we likely need a little more sunshine to make up for the cooler, darker spring. Monitoring the berry crop is essential in understanding and preparing for increased bear activity near people when berries are late.

During May a minimum of 12 different bears with and without radio-collars have consumed garbage in Whistler Valley. This is discouraging as bears begin again to reinforce another year and another cycle of human food consumption. The most dangerous consequence of feeding on non-natural foods is that bears remain alive in the valley to reinforce this human food seeking behaviour each year.

Every single year during the last 13 years I have studied bears in Whistler, bears consume more and more garbage and learn better ways to access garbage. This behavior is disheartening to me as I attempt to educate people that live in this beautiful place.

Garbage, recycling, and bird feeders are destroying the natural health of the bear population. Unhealthy bear behavior is going to lead to human injury... sooner or later. Please, keep garbage and recycling stored away from bears and do not overflow bins.

If you see a collared or ear-tagged bear in Whistler valley call 905-BEAR (2327). Thanks to Pique Newsmagazine for their support.