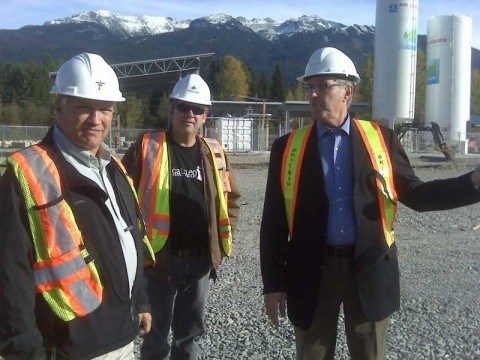 Mind-blowing - that is how Mayor Ken Melamed described Whistler's almost-complete transit facility on Monday after taking a tour of the construction site.

"It is amazing what they have built there."

Other councillors were equally impressed by the new bus hub near Nesters Market and the Resort Municipality of Whistler's works yard.

"For our little town, it is a massive industrial project," said Councillor Ted Milner, who serves as chair of Whistler's Transit Management Committee. "It is extremely impressive."

And Councillor Chris Quinlan added: "It is awesome."

This week council members had their first peek inside the new transit facility, which has been under construction for almost a year and will be opened in December.

Once complete, the facility will be able to hold 150 buses, including the 20 extra-long hydrogen fuel cell buses coming to Whistler this winter as part of a provincially and federally funded pilot project.

The bus hub will also have a hydrogen fueling station, and this week the hydrogen cylinders arrived in Whistler.

"It is the biggest facility of its kind in the world," said Melamed.

All three council members were satisfied with B.C. Transit's effort to mitigate the environmental impact of the large facility, including the bio-filtration ponds and oil filtration systems.

"Basically, the mitigation is built as we had been shown in the open houses," said Melamed. "There is a stream that connects behind the public works yard, it comes alongside the transit facility, it flows through and all the storm water flows into the biofiltration field, through a pipe out into the mitigation channel."

Melamed doesn't think the mitigation measures will be enough to erase these concerns.

But he said given the fact that Whistler didn't have control over the property, which is owned by B.C. Hydro, B.C. Transit has done an admirable job.

"It is challenging for me to say the pros outweigh the loss of the wetland, and I still believe the loss of the wetland is a loss," said Melamed. "But the land was zoned for this use. It didn't have to go through any process. The best we could do was ask our partners, B.C. Transit, to provide remediation. Given that, I think they have done a commendable job."

Council also got to see the latest budget for the multi-million dollar project in a closed-door meeting on Tuesday morning.

So far, the project appears under-budget, commented Milner, Quinlan and Melamed, although they couldn't publicly state what the exact costs are. B.C. Transit plans to announce the numbers publicly later this month.

Even though the project is managed and owned by B.C. Transit, the municipality is required to pay approximately half the costs.

Milner said the municipality will pay this over a 30-year period.

"It is done, and we have got it," said Milne. "It certainly looks efficient and effective, and all the B.C. Transit people, all their contractors, and the Whistler Transit people are over the moon. I think it should impel them to give the better service they are talking about."

Joanna Morton, spokesperson for B.C. Transit, said the new facility is large enough to accommodate Whistler's needs for the next 50 years.

"It is a long term decision that will benefit the entire community," she said. "With the high ridership of the Whistler community, it is absolutely necessary that this new facility be built to accommodate the number of buses we will be adding from now and 50 years from now."

Morton added that the first hydrogen buses are currently undergoing testing and should arrive in Whistler next month.