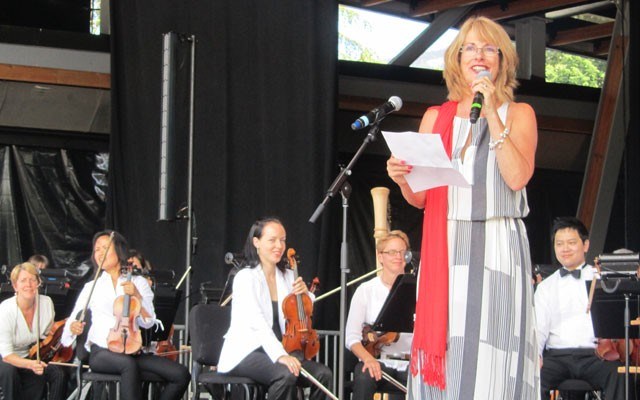 As the Vancouver Symphony Orchestra (VSO) completed its warm-up, Whistler Mayor Nancy Wilhelm-Morden took to the stage with a big smile on her face.

The July 1, Canada Day concert by the VSO in front of hundreds of sun-crisped classical music fans was about to begin at Whistler Olympic Plaza, as Wilhelm-Morden picked up the mic to welcome the musicians and to make an announcement.

"I am excited to announce a new program... Next summer we are going to open the Vancouver Symphony Orchestral Institute at Whistler (VSOIW)," she said to loud applause.

The announcement came days after Emily Carr University of Art + Design postponed its summer satellite course for young artists in Whistler due to lack of enrollment.

The Emily Carr partnership was announced to fanfare in December 2013 and built on the recommendations of the Learning and Education Task Force, the Whistler Community Cultural Plan, and the Cultural Tourism Development Strategy. The Education task force report recommended Whistler pursue small education opportunities with proven schools such as Emily Carr.

The RMOW's chief administrative officer, Mike Furey, said that they did not have numbers for how many teen students the Emily Carr program had attracted, adding that they would meet representatives from the university this week or next week to discuss ways to move it forward.

"It wasn't the numbers they were hoping for," he confirmed. "That said, we continue to have a great relationship with Emily Carr. It's more of a timing issue than anything else, in terms of proceeding with the program.

"I think it fits in with our approach arising from the Education Task Force outcome, to start small, low risk, try things out. If they don't work immediately, that (isn't) a significant setback (for the RMOW). It's a good learning experience; we didn't get it in place this summer but let's keep on working together. They are very committed, as are we, to make Emily Carr programming happen either this fall or into 2015.

"I look at Emily Carr and think, 'Yeah, it didn't jump right off the ground as we had hoped for the summer,' but I think we also took the right strategic approach in mitigating the risk to Whistler... this is just one step along the way."

It is not clear why registration was low, and no one from the university was available to comment due to the long weekend. The five-day art courses were $1,500 for Canadian students and $1,700 for international students, not including accommodation.

Meanwhile, the Whistler Film Festival confirmed last week that its summer film school camp for kids had also been cancelled due to lack of enrollment. No further statement was provided.

Neither the Emily Carr program nor the WFF program had any financial commitment from the RMOW.

However, the municipality outlined in a Letter of Agreement tabled at the Wednesday, July 2 council meeting, that the RMOW agreed to invest up to $175,000 over the three-year period as a fee to the Vancouver Symphony Society (VSS) for services related to developing, planning, promoting and producing the VSOIW.

"(The VSOIW) is still a low-risk, 'take it one step at a time in very small pieces' kind of initiative; $175,000 over three years is not to be sneezed at," said Wilhelm-Morden.

"So there is a bit of a bigger stake from a financial perspective, but we have confidence in this relationship with the VSS.

"We expect that we will see increased revenues through the students themselves staying in Whistler, their friends and family as well, or making increased visits.

Wilhelm-Morden added that in light of the agreement, it was the RMOW's expectation that the popular annual concerts in Whistler by the VSO would continue.

The VSOIW's pupils will work with members of the orchestra in private lessons and public master classes. They will also participate in chamber music and orchestral rehearsals and performances, according to an RMOW staff report submitted to council.

The VSS will work to develop, promote and produce the inaugural program, starting in the summer of 2015 and in the following two years, until 2017. There are no details yet as to fees.

RMOW funding for the project is being considered in the 2014 Budget under Learning, Education and Cultural Tourism initiatives, and funded in both 2015 and 2016 "within project discretion," said the submission. The municipality will also provide dedicated staff for communications between themselves and the VSO, as well as provide oversight and approval of the VSOIW's framework, marketing strategy and budget.

The VSO will allocate senior-staff time to participate in the development of the program, contribute to the strategic framework of the program, develop the budget and cash-flow forecast, lead the operational side including securing venues and accommodation, select students and contract VSO teachers.

The Whistler Arts Council's new community cultural officer, Anne Popma, will also participate in the creation of the institute.

VSS president and CEO Jeff Alexander said they had been in discussion with the municipality for about a year, and had been thinking about it since they began performing in Whistler three years ago. This led to discussions with the RMOW's Education Taskforce.

"We have 12 different educational programs in Vancouver," he said. "It's geared towards students who are studying orchestral instruments... from anywhere in the world. We want to make this an international destination."

Alexander said the Boston Symphony Orchestra had been offering a similar program for 60 years.

"The first year (in Whistler), of course, will be an experiment on so many levels, but we're anticipating that we will receive applications from serious music students," Alexander said. "In time, our goal would be to see if we could create a bursary and things like that."

It is hoped that as many as 100 students would enrol, but the program could run with as few as 15, said Alexander.

"I'd be surprised if we got that few, but if we did, we made a commitment to do this," he said. "The reason we can do that is that we can engage only as many faculty members as there are students. It's completely flexible."

When asked if the institute was seen by the VSO as an additional revenue stream, outreach, or a chance to discover new talent, Alexander said "all of the above," and pointed out the orchestra's status as a not-for-profit.

"We're not looking to make a fortune on it... but certainly it will be an additional revenue stream. More importantly, it's giving these young students the opportunity to study with some advanced, professional orchestra musicians," he said.

Wilhelm-Morden said ongoing public performances by the VSO would continue.

She confirmed that the RMOW was in discussions with other arts organizations for similar ventures at the resort.