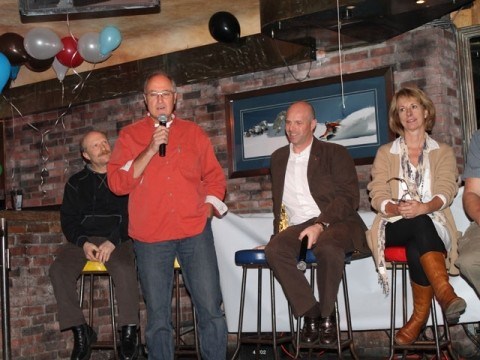 A crowd of roughly 100 turned out on Wednesday night for the second-to-last mayoral debate of the 2011 campaign, with five of six candidates taking to the stage at Maxx Fish for the Whistler Is Awesome meeting.

The format was rooted in social media, with candidates answering questions based on a survey of participants and questions forwarded through Twitter. Brent McIvor was the only candidate who could rest a foot on the ground while he sat on the tall bar stool, leaving the other four candidates - Miro Kolvek did not attend - perched for close to two hours.

Questions ranged from the RMI, to support for the arts, to the budget to the environment, and for the most part candidates stuck to their platforms and referred voters to their websites. The most telling questions were personal.

One question asked the mayoral candidates what is their greatest weakness.

Mayor Ken Melamed said he had no tolerance for "bullshit."

"I have a low tolerance for disrespect, intolerance and ego," he told the crowd.

Candidate Nancy Wilhelm-Morden said she had to work on patience.

"My greatest weakness would be impatience, I don't have a lot, I'm very aware of it and I try to deal with.... I also don't have French as a second language, I can read it but can't speak it and that's embarrassing for me."

Ralph Forsyth said it was his temper.

Forsyth said his anger is not a form of manipulation. "I wear my heart on my sleeve," he said.

Brent McIvor echoed Wilhelm-Morden's wish to be bilingual, and said his weakness was news. "I'm a news junkie to the extent that I need to stop worrying about who is the new leader of Greece or Italy.... and spend more timing learning all the three-letter acronyms... at the municipality."

Shane Bennett said he had a dysfunctional youth growing up as an orphan, and while he can read he has trouble sitting down to write. "I'm a savant, in that I'm really good at some things and bad at others. I hope people understand I have strengths, I don't think the way most of you think."

Another revealing question was whom the mayoral candidates would vote for if they weren't running for mayor.

Both Ken Melamed and Ralph Forsyth said they would vote for one another. While they disagree on a long list of issues, they've come to respect the other over the last six years on council together. Brent McIvor would say only that he would vote for three of the candidates on the panel, and Wilhelm-Morden joked that she would vote for Shane after Shane endorsed her, and left it at that.

The final mayors meeting will be on Friday, Nov. 18, hosted by the Whistler Rotary Club. There will be a meet-and-greet from 5:30 p.m. in the Grand Foyer of the Whistler Conference Centre, with a candidate debate from 7 p.m. to 9 p.m.