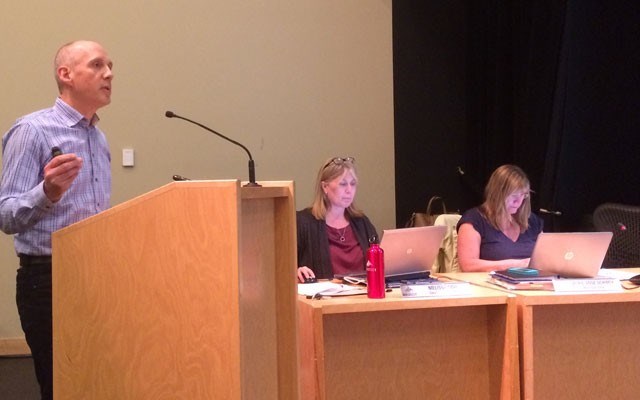 In response to Whistler's housing challenges, the Resort Municipality of Whistler (RMOW) is putting together a Mayor's Task Force on resident housing to come up with solutions.

The initiative was announced at the Oct. 4 council meeting.

"We're not saying 'let's study this for six or eight or 12 months,'" said chief administrative officer Mike Furey in a presentation to council.

"Let's jump into this and take action immediately."

One of the task force's immediate aims will be increased enforcement of illegal nightly rentals.

"We are recommending that we move forward with court proceedings to take immediate and tangible action in terms of injunctions for people who are not following the requirements around zoning for nightly rentals," Furey said.

The RMOW will also be amending its business licensing and regulation bylaw to help with enforcement.

In the short term, the task force's other priorities will be to engage the private sector on new resident restricted rental developments, seek funding from the federal and provincial governments and move forward with another development in Cheakamus Crossing adjacent to the building currently being constructed on Cloudburst Drive.

Council also gave first and second readings to a zoning amendment bylaw that will allow for such a development, though it likely won't be completed until 2018.

Medium-term priorities include focusing on transit and transportation, and gaining a better understanding of how resident restricted housing is being used.

It will also include a community member-at-large (appointed by council), a member of council, mayor Nancy Wilhelm-Morden, Furey and another senior staffer.

"I can't stress enough that, really, this is a community challenge, and we know if we bring our community partners together we can find a better solution," Furey said.

But those hoping for housing solutions for the winter will likely be left out in the cold.

Asked after the meeting about those who have been recently evicted, or who are still looking to find accommodation for winter, Wilhem-Morden said the "best bet" in the short term is to get illegal nightly rentals back onto the long-term rental market.

She also pointed to two upcoming seminars, one each for landlords and tenants.

"There is a lot of nonsense going on out there on both sides, and if people know what the law is and what their rights are, we can hopefully see some of those shenanigans end," the mayor said.

The seminar for landlords is scheduled for Thursday, Oct. 13, from 2 to 4 p.m. at the Whistler Public Library, while a date for the tenant seminar will be scheduled for sometime in November.

In response to suggestions about bringing in a temporary workers camp, Furey noted that could come with some legal problems.

"In other communities there's been legal action, when the municipality went to remove a temporary camp... the courts have sided with the residents saying that it could not be dismantled. We want to look at that very carefully," he said.

The RMOW hasn't done extensive research into it, but "it doesn't seem on first blush to fit in with the community," Furey said.

Furey began his presentation by talking about the events of the past few years, and how the RMOW got to this point.

Through the Whistler Housing Authority, the RMOW has hit its target of housing 75 per cent of employees in-resort for the past 13 years, and additional resident restricted housing has been built as the town's economy evolved.

But there are a number of factors now conspiring to crunch the market.

When the number of FTE's began to drop around 2009, some businesses got out of the employee housing market — and many are now scrambling to get back in.

Dwindling supply in Squamish and Pemberton has also played a part, as has the number of home sales and renovations locally.

Then there's the issue of illegal nightly rentals: the RMOW counts 83 listings on Airbnb and 45 on VRBO that are not zoned for nightly rentals, which equates to up to 400 beds that are potentially not being made available to the community.

Wilhelm-Morden pointed out that this is the first Mayor's Task Force formed in recent memory.

"I think by characterizing it like that what we're doing is telling the community this is a serous issue, we are going to address it as best we can, as quickly as we can, and with as much fortitude as we can," the mayor said.

"We're not going to solve the housing problem — I think we've got to be realistic. But we are going to give our best effort to be action-oriented and to do what we can to make things somewhat better, at least, than they are right now."