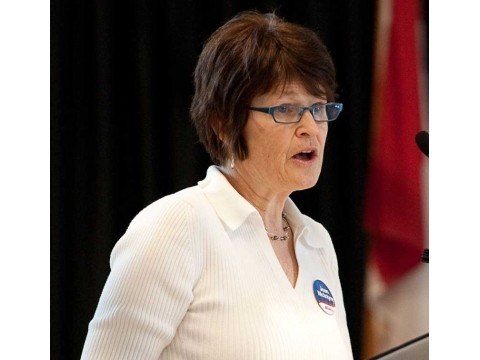 Liberal MLA Joan McIntyre is a "very happy lady" after winning a second mandate to represent the residents of the Sea to Sky corridor in B.C.'s legislature.

McIntyre, the incumbent MLA for the now-defunct riding of West Vancouver-Garibaldi, will serve her second term in government as the inaugural MLA for West Vancouver-Sea to Sky after winning 9,512 votes and 54 per cent of the vote - miles ahead of her challengers from the Green Party and the NDP.

The Liberal Party, under Gordon Campbell, will also form another majority government.

Reached at her campaign office on Tuesday night, McIntyre was ecstatic at the results.

"I've said to several people that this election was a lot more about the four years as an MLA than the four-week campaign," she said. "This is the first time I was running as an incumbent, for me this was definitely about my term."

The results were also surprising since the provincial boundaries were re-drawn before the election. The creation of West Vancouver-Sea to Sky shaved approximately 4,000 potential voters off the new riding.

"I topped my vote (share) and so I'm very happy," she said as results continued to roll in. "The riding distribution did not favour me at all. I'm almost at 8,000 votes it appears."

McIntyre's vote count did indeed come in thinner than in the 2005 election, where she got 11,090 votes and 50.78 per cent, likely owing to a lower population. But she did improve her share of the vote this time around.

In the 2005 race Green candidate Dennis Perry came in second with 5,778 votes and 26.46 per cent of the votes cast, the biggest turnout for any Green candidate in the province.

This year, NDP candidate and Horseshoe Bay resident Juliana Buitenhuis placed second in the race, garnering 4,001 votes and just over 23 per cent of the vote as of Tuesday night.

A counsellor who works with Squamish Nation youth, Buitenhuis was pleased with coming in at second place.

"I made some leaps and bounds from the last election," she said. "I came ahead of the Green guy, although he wasn't really my competition. My competition was Joan McIntyre."

Throughout the campaign in West Vancouver-Sea to Sky she focused on Bill 30, an amendment to the Utilities Commission Act that kept local governments from having a veto over the installation of public utilities. She also focused her attacks on the carbon tax, saying repeatedly that it pawned an unfair cost on to school districts.

"I'm still waiting for the dust to settle here but I would be honoured if the NDP would have me run again," Buitenhuis said.

Green candidate Jim Stephenson came in third with 3,862 votes and 22 per cent of the vote share. It was the most votes for any Green Party candidate in the province but not enough for a win.

Stephenson sounded disappointed as results rolled in on Tuesday night.

"At this point it's not as good as expected," he said. "I thought I would be up in the 30 per cent range, but at this point I haven't done the math. Of course we'll have full reports (tomorrow) for sure."

Stephenson, a computer consultant by trade, focused his campaign on public-private partnerships (P3s) which have been used by the provincial government to supplement public dollars and help complete infrastructure projects.

Run of river projects figured as a big issue for all candidates in West Vancouver-Sea to Sky. Both the NDP and Green Parties opposed developing any more private run of river projects on B.C. streams, while the Liberals feel they're an important part of meeting the province's energy needs.

McIntyre said run of river opponents tried hard to make an election issue out of such projects but ultimately wound up inviting scrutiny themselves.

"I think that the fact that they did bring it on to the agenda, and the fact that the media and others put their attention on it is that we were able to get the facts out," she said. "They've been for four years blogging and flogging the myth - and quite successfully - in their own way, but when they got the attention on the issue and the media started asking questions, (CKNW host) Bill Good exposed them for all being about a private vs. public issue."

Province-wide, the election results didn't deviate too far from the 2005 results. With six additional seats the B.C. Liberals got 50 seats, up four from 2005, while the NDP got an additional two seats for a total of 35. The Green Party once again failed to elect a single candidate.

A referendum on voting reform also failed at the ballot box. In addition to MLAs, voters were asked to decide whether to endorse single transferable vote (BC-STV) in future elections.

Rather than the current "first past the post" system in which the candidate with the most votes wins, BC-STV would have required voters to rank candidates according to preference.