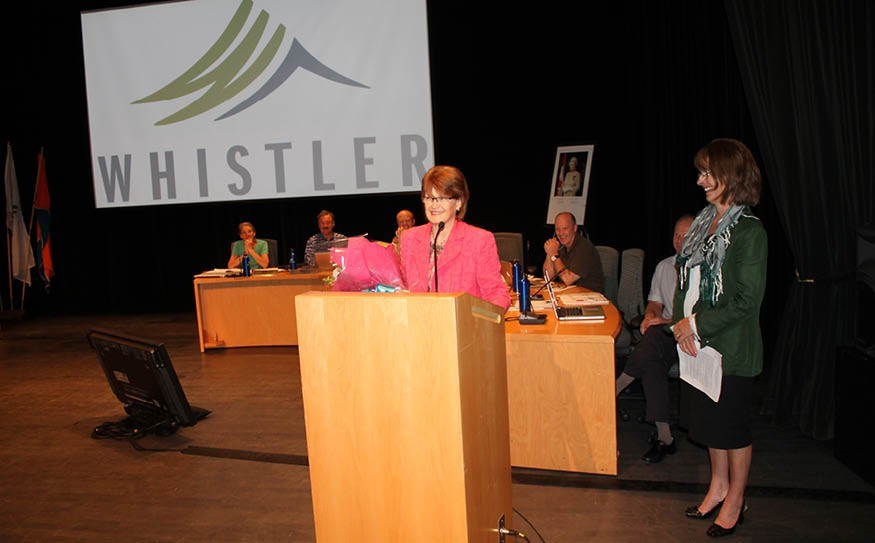 retirement recognition After eight years in political office Joan McIntyre was honoured Tuesday, May 7 by Whistler council for her contribution to the resort and the Sea to Sky corridor. Photo BY ANDREW MITCHELL

After eight years representing West Vancouver-Sea to Sky, BC Liberal MLA Joan McIntyre has retired from the B.C legislature. Here she speaks to Pique's Cathryn Atkinson about the highs and lows of her time in Victoria.

Pique: How would you describe the last eight years on the job?

Joan McIntyre: I really wanted to be a good listener, based on my polling background. I had experience in listening to people and understanding and putting that into policy. I think I've made a very conscious effort to be a good contingency person and an MLA that's "on the ground," listening to the communities and hearing what their objectives were. I worked very hard at that.

Pique: What were your priorities when you started?

JM: ...In 2005 I felt that the BC Liberals really deserved an opportunity, once they did the heavy lifting in getting the economy turned around.And I really wanted to make sure that the North Shore and Sea to Sky region got a fair share of the benefits and rewards of that economic turnaround, especially since we were going to host the 2010 Olympic Games. If you include the Sea to Sky Highway upgrade, hundreds of millions of dollars have poured into the riding over both terms, so I feel that the riding is a different place than it was a decade ago.

Pique: I understand there was a standing ovation when you stood to speak the last time in the legislature.

JM: I'm smiling as you say that. It was very overwhelming. In my second term, the former premier (Gordon Campbell) appointed me chair of the Select Standing Committee on Children and Youth, and so after 30-plus years in business and after my first term on economic committees, all of a sudden I was thrust into the world of social justice and the issues primarily facing the most vulnerable families and children in the province. It was very eye opening. I decided at that point that neither side of the House should be scoring political points on the backs of vulnerable children and families, and... I decided in this case I really wanted to work with the NDP and (Representative for Children and Youth) Mary Ellen Turpel-Lafond, who is widely respected representative for children and youth, I wanted to make sure she did have a platform. It was recognized by my colleagues in the House, and that was really, really gratifying. It brought tears to my eyes.

Pique: What changes have you seen in the constituency and have there been any surprises?

JM: In the two terms, when you think of all the work... the spotlight of billions of viewers on the Sea to Sky Highway as we prepared for 2010, that was five years of my time. There was so much construction, land use devolved to the First Nations — they had unprecedented economic opportunity. The Lil'wat and Squamish have had great economic opportunity. The engineering feats (on the highway)— that hadn't even been done before. (There was a) huge amount of activity, building the Athletes Village, and the Callaghan we basically created out of nothing. The feverish activity and then, unfortunately, combined with the economic downturn in 08-09 as we were heading into the Olympics, there were some dramatic changes there. Going back to Ted Nebbeling, my predecessor... we did give the Oceanfront Lands to Squamish, almost 70 hectares of land there, that unfortunately hasn't come to fruition, which is a little bit of a surprise and disappointment. I totally understand it, the community went in one direction, they retrenched and I think the current plan they have that involves the combination of park, some residential and also commercial and marine commercial is probably a good balance... I am optimistic that it will all come in time. The Cheakamus Crossing, that was huge, 300 acres donated by the province to Whistler to transform the Athletes Village to a neighbourhood. I appreciate that it hasn't been without controversy because of the (asphalt) plant, but that was not part of the original (situation). I'm so sorry the community has had to go through all that, but that said, there is an amazing neighbourhood there. I was looking at a scrapbook from when I was first running the other day and I remember the financial tools, as it was called then, was very big and I worked closely with Ken Melamed and council and Carole Taylor, when she was finance minister, and we got that done, which was $6 million a year for Whistler — now that has transformed into the RMI funding, a regular grant. That's huge to help with the tourism effort, a huge benefit to the community.

Pique: What are you going to miss after you leave office?

JM: The best part of the job that I will miss most is the people. I live in the south end of the riding, but I had six mayors and councils, 10 communities. People in Rotary, for example.... I'm going to miss the Test of Metal this year! I went every year for eight years. I remember the soccer parents in Squamish when we did the turf field. There were tears in people's eyes... I understand parents had been working on that for 20 years trying to get the fields there. (Liberal candidate) Jordan (Sturdy) teased me the other day with, "I think Joan picked the best eight years of the last 25 to be MLA." He's right.

Pique: Going to the flipside, what were the challenges and disappointments?

JM: One of the disappointments, and I feel very badly about this, was the Squamish courthouse. I worked very hard with (Justice Minister) Wally Oppal in my first term, and he came up with a great, creative out-of-the-box thinking (about) taking the money that Whistler and Squamish were spending, municipally, in sending police and officials down to court in North Vancouver (and using it for the Squamish courthouse). But they couldn't find a venue... I thought that might be a really huge thing for the corridor so that was a disappointment. And even — I hate to raise these sore points — but also the day lots in Whistler. The province gave the day lots to the municipality. That was a huge amount of land that the province gave to Whistler, and there was land within Whistler's boundaries that was given to First Nations, too. Some of that, especially when there was all that controversy about the parking, I felt like two of the things, the asphalt plant and the day lots at Whistler, when they were gifts from the province, didn't turn out the way I think the ministers thought or hoped.

Pique: As outgoing MLA, what do you see as the current issues for voters in the Sea to Sky corridor?

JM: Certainly, getting Squamish to attract economic development and dealing with the Oceanfront, making sure they get the full benefit. That's the last deep-sea, open port to be developed in North America, so they have great potential. Garibaldi @ Squamish (the ski resort on Brohm Ridge) has been an interesting, controversial issue. It's still alive. I have always maintained that there needs to be community support for that and there hasn't been to date, not significantly. That is something that will have ramifications all the way up and down the corridor. There is still a list of things that are not quite done. The master plan for Garibaldi Park is in progress. BC Parks has come out with a recommendation; they've closed the public comment and are reviewing. The masterplan for Whistler Blackcomb. And with Whistler's OCP and the concerns of First Nations, too. Those issues I've worked very hard for. One of the main highlights in this is the work I've done for First Nations, to deal with the land for the highway and various other things and the whole hosting of the Games and cultural and economic opportunities. I'm very proud of that work. The things that led to the Squamish Lil'wat Cultural Centre, the Cheakamus Community Forest... There will be lots of issues related to how we go forward in land use.

Pique: You're making me feel tired just listening to this.

JM: It's a big job.In a perfect world, I wish we were able to invest more in people and the early years in particular because when you look at government there is always money for capital and you can do that in accordance with the economy growing or shrinking, but it's what good debt is. Whereas the debt we accrue for social programs, childcare, all those kinds of things that I think are so important go into our operating (budgets).You see the stats about families living in poverty and not giving kids a healthy start, it affects them for their whole lives. I am completely convinced we need to be putting more dollars in from prenatal.I've been a proponent of modernizing the delivery of education and all the way up to ensure that we are investing in skills training, that these kids are being prepared for jobs that exist.

Pique: Given your work in child safety and child care, have you sometimes felt disappointed about the pressure this sector has been under?

I have, I have. Now I'm not the MLA today I can probably be a little more candid. I think it's a shame, but it's the way I described to you, it's the way we fund these things. It's easier to borrow for capital (investments) and amortize over time than to spend the money up front.I think as politicians we have to have the courage to make some of these longer-term decisions. We have to have the will of society saying they support this and want this.