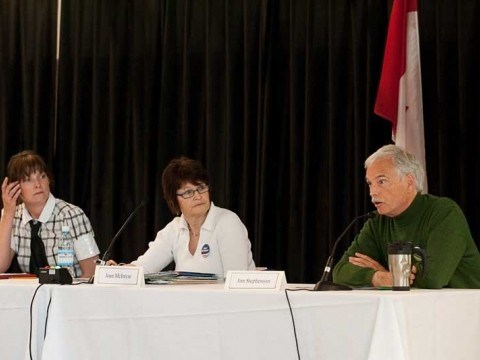 Less than two weeks to the May 12 provincial election, the three candidates in the West Vancouver-Sea to Sky riding went head-to-head Saturday in their second debate of the campaign.

Despite the low turnout, the candidates' attacks remained fierce throughout the hour-and-a-half session. And their different personalities showed as they debated issues like the carbon tax, economic policy, and P3s.

Buitenhuis, who is running for office for the first time while also attending university and working, got placed on the hot seat early on when a community member asked her to explain the NDP's position on the Liberal carbon tax.

"The main issue with the carbon tax was that it wasn't taxing the right people, like farmers and school districts... and big polluters got off easy," said Buitenhuis.

"The NDP plans to instate green bonds. It is a safe investment for the community and will go directly back into green projects."

She added the NDP is encouraging cap-and-trade programs, referring to a system where the government sets a limit on emissions permitted, while allowing firms to trade permits.

To this, McIntyre retorted: "First of all, the school districts get a 100 per cent rebate on the carbon levy."

McIntyre then pointed out the Liberals passed the Greenhouse Gas Reduction (Cap and Trade) Act last year, even though NDP leader Carole James voted against it.

Another animated exchange came several questions later when community member Nick Davies asked Stephenson how the Green Party was going to pay for all of its policies.

Stephenson, who holds two PhDs from Stanford and was a former professor at UBC and SFU, said that unlike the "mainstream" parties, the Green Party doesn't have the resources to fully cost its platform.

But he said in the face of the economic downturn, the Green Party is advocating investment in infrastructure in the short term while ensuring that spending is offset in later years.

"We want to make to make both the economy and the environment sustainable for future generations," said Stephenson.

McIntyre - who stressed the Liberal's track record throughout the debate - did not let that issue rest.

"I think to go before the taxpayer, you need to have a fully costed platform," she said, before delving into how the Liberal party plans to get out of the current deficit by 2011-12. She also pointed to flaws in the NDP plan, saying it has a "$4 billion hole."

The Liberals say the NDP platform includes billions of dollars in new spending, unfunded commitments and unrealistic revenue assumptions, which will add $4 billion to the deficit.

Later, in her closing remarks, McIntyre said: "The Green Party is full of utopian promises without any budget attached. That is not right or practical."

While none of the 10 questions ambushed the Liberals' platform or McIntyre's leadership, Stephenson and Buitenhuis made sure P3s, or public-private partnerships, got their turn under the microscope.

Both Stephenson and Buitenhuis condemned the Liberal Party's move towards P3s in their opening statements and continued this theme throughout the debate, particularly with regard to run of river power projects.

"They are trying to turn a profit... and giving full reign to the private sector to put projects on rivers is less environmentally sustainable," she said. She suggested instead, the provincial government redistribute funds to pay for public-only projects.

Stephenson added putting private companies in charge of public projects does not make sense because governments can borrow money for lower interest rates. He added that run of river projects jeopardize B.C.'s resources.

But McIntyre continued to defend P3s, saying the province has been internationally recognized for "leveraging taxpayer dollars and transferring the investment risk." She added the Liberals saved $130 million by upgrading the Sea to Sky Highway with a P3 model.

McIntyre did concede, though, that P3s are not the "answer to everything."

Many people think that, unlike the rest of B.C., the election race in this riding could be boiling down to the Liberal and Green parties, rather than the Liberals and NDP.

This year, Buitenhuis was selected as the NDP candidate only six days before the provincial government dropped the writ on April 14.

"I wish I could make this my full time focus and have more time to find out about local issues," said Buitenhuis following the meeting.

"I only have two days a week where I can donate 100 per cent of my time. It is too bad that politics are set up that way, making it tough for a working person."

Buitenhuis, though, was the only candidate who spoke French on Saturday when responding to a question about bilingual services.

Get your vote on

Polling stations in the Sea to Sky Corridor will be set up on election day, May 12, at the Westin Resort and Spa in Whistler, Brennan Park Recreation Centre in Squamish, the Pemberton Community Centre, and the Ts' Zil Learning Centre in Mount Currie. Polls will be open between 8 a.m. and 8 p.m.

Advanced voting will also be available between May 6 and 9 at the Westin in Whistler and Brennan Park in Squamish, between 8 a.m. and 8 p.m.