Local family makes up ground on final stage to claim victory in event revived for GO Fest
May 18, 2014 9:00 AM By: Eric MacKenzie 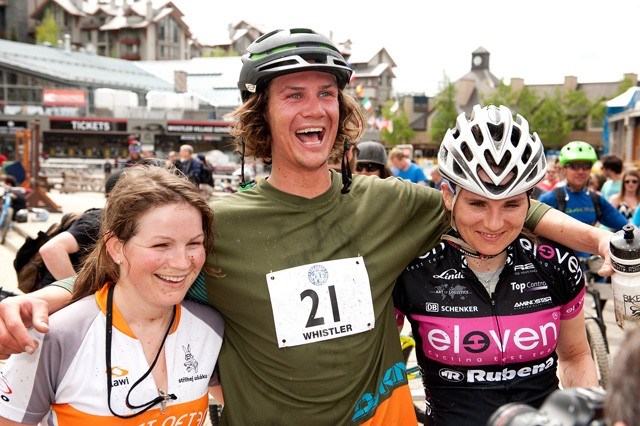 James McSkimming, centre, celebrates after crossing the line first to give his family team the win in Sunday's Great Snow-Earth-Water Race. Michaela Pacakova, left, was part of the runner-up Livin' the Dream Team, while Petra Tlamkova, right, came across the finish line third for Czech Please!. Photo by David Buzzard / www.davidbuzzard.com

The family that skis, bikes, runs and paddles together, wins together.

The Whole Damn Family - a team comprised of six different members of Whistler's McSkimming family - won the first edition of the revived Great Snow-Earth-Water Race on Sunday, May 18, earning a come-from-behind victory on the last stage of the Great Outdoors Festival event.

James McSkimming got on his bike in third place to start the sixth and final leg, a cross-country mountain bike route over the Lost Lake and Blackcomb trails. But he overtook both riders in front of him, including one that had gone off course, to take the win for the McSkimming clan in an unofficial time of two hours, 22 minutes, four seconds.

"I didn't realize it was a win," James said after crossing the finish line at Skiers Plaza, who only passed one other racer on course and assumed he'd put his team in second place. "I got a little update at the Benchlands that there were two ahead of us.

Unfortunately for team Czech Please!, anchor-leg rider Petra Tlamkova took a wrong turn along the way while holding the lead, and she wound up crossing the line third.

"It sucks... I went off course somewhere," said Tlamkova, standing with teammates at the finish, who were telling her not to feel bad about the mistake. "I feel bad for the guys because they did an awesome job."

Livin' the Dream Team finished as the runners-up, 28 seconds behind The Whole Damn Family.

The final two stages of the race saw a number of lead changes. Czech Please! paddlers Phil Beauregard and Lucie Klemsova were ahead by about 90 seconds when they reached Meadow Park in their canoe along the River of Golden Dreams. But Livin' the Dream Team paddlers Drew Hetherington and Kevin Brott made up the deficit before the leg was over, making a huge push across Green Lake to take the lead and send teammate Michaela Pacakova away for the mountain bike ride in first place.

Tlamkova then grabbed the lead back before getting lost, allowing McSkimming to move to the front.

The Whole Damn Family hung around the front of the pack most of the day. Rob McSkimming had the team in fourth place after the ski touring stage that began the race, and son James, who also completed the downhill ski leg, had moved up to third when handing off the baton to mother Marilyn for downhill biking. Jamie McSkimming took care of the run stage, while John and Jennifer McSkimming manned the canoe.

"It wasn't a hard one (to convince) people to join into," Rob said of assembling the family team for Sunday's race. "We just got the gang together, suggested a little team layout of who would do what, and it was fun. Super fun."

Rob and Marilyn were among just a handful of competitors who had also participated in one of the original Great Snow-Earth-Water Races, which were a staple in the resort from 1975 until the early '90s. Although they were a little before 25-year-old James's time, you could say he participated in one as well - in utero, in 1988.

"The interesting story is that James did it when he was minus-two months," laughed Rob.

There were 27 teams of up to six racers on the start list Sunday, a far cry from the 150 teams that raced the event at its peak more than two decades ago. But Bryan Walhovd, who founded the original event and ran it for many years after, said he felt the revived race captured the spirit of the old days.

"I think it's fantastic," Walhovd said while standing at the finish on Sunday. "I think they've got a better infrastructure trying to put something like this on (today.)

"I think next year, they can easily (pump up) the participation."

Rob McSkimming said he, too, thinks the race can have a bright future in its new form, and he's hopeful to see more of the people who competed in the original Great Snow-Earth-Water Races to come back in 2015.

"We've gotta call those guys out, there are a lot of them still around. We've got to figure out how to get them back into it somehow and give them some encouragement... because it's just as fun as it used to be," he said.

"It's a great vibe, and the interesting thing is that Bryan said when he started it in '75, there were 25 teams, and that's the same we've got (today,) and it eventually got to 150. You can feel it building."

Final official results will be posted at www.greatoutdoorsfest.com.