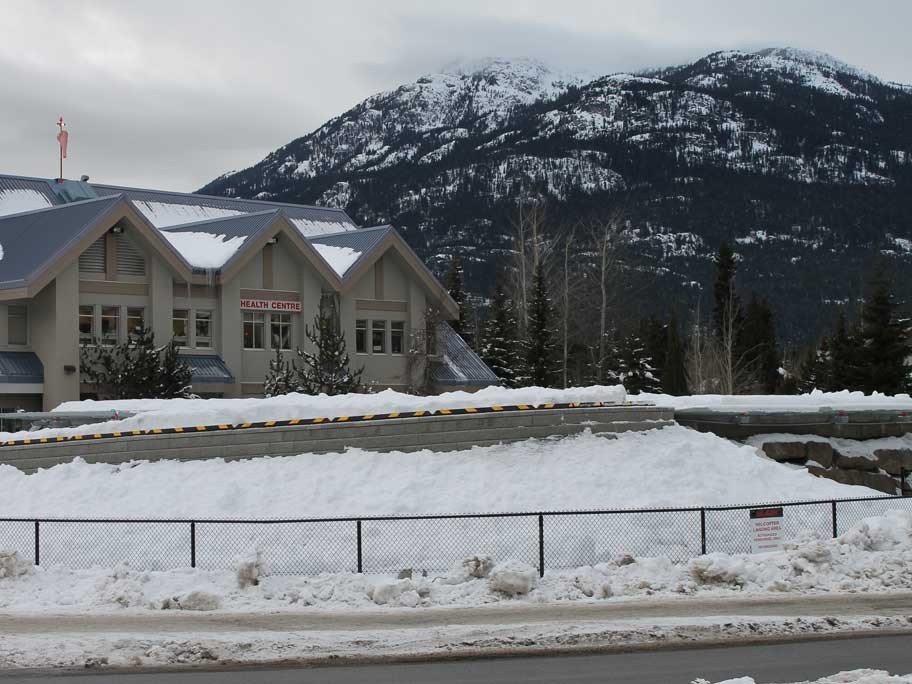 CLEARED FOR LANDING Construction on the improved helipad at Whistler Health Care Centre has wrapped up, with final inspection taking place on Friday. Photo BY alison taylor

The long-awaited reopening of the helipad at the Whistler Health Care Centre appears to be near.

The helicopter-landing pad at the health centre was supposed to be open by the start of the mountain season, but according to Trudi Beutel of Vancouver Coast Health (VCH), the final piece of work was held up by Mother Nature.

"The weather wasn't quite right and there were some delays with the concrete pour and the curing and that is what held it up over the last couple of weeks," said the VCH public relations officer.

"All the work is done on the helicopter pad at the Whistler Health Care Centre," said Beutel on Monday (Dec. 12). "We just need the final go ahead from Transport Canada to get the helipad up and running."

Beutel said the Transport Canada inspection is scheduled for this Friday, Dec. 16.

"Everything at this point is on track to have the helipad open as soon as that inspection is done," she said.

Brad Sills, the manager of Whistler Search and Rescue, said the reopening of the helipad is fantastic news.

"It gives us the capacity to ship people out of here at night, which we haven't had for some time," said Sills.

He also said the air ambulance service will now be able come and pick people up to take them to the city.

He remains concerned about the fact that the helipad is only cleared for use by H2 and H3 certified aircraft. According to Sills, most of the helicopters based in Whistler are single engine aircraft that aren't permitted to use the helipad.

Some of the new single engine helicopters out perform the older twin-engine aircraft, according to Sills.

"The work that Search and Rescue does is particularly affected in that we use mostly single engines," said Sills.

Since the start of the winter season Sills said he wasn't aware of any Search and Rescue missions requiring the use of a helicopter. But there have been cases in the past where Search and Rescue teams were forced to take a critically injured patient to the heliport at the north end of Whistler, transfer the patient from a helicopter into a waiting ambulance then drive 10-kilometres south into the village to the Whistler Health Care Centre.

The average driving time from the two points, according to Google Maps, is 11 minutes.

Last winter the helipad wasn't available for use over a one-month period and a health care worker said at the time that there was one case where time was critical in that one-month closure. Because the patient had to be transferred to an ambulance at the heliport it took an extra hour in that case to get the patient to the Whistler Health Care Centre.

Blackcomb Aviation confirmed that there have been between six and 10 medivac operations at the heliport since Whistler Blackcomb opened for the season.

Pique was made aware of at least one helicopter evacuation from Whistler Blackcomb this season when heart attack victim Peter Allan was taken off the mountain.

Allan wrote in a "letter to the editor" that his life was saved through the quick action of ski patrollers and the use of a helicopter to get him off the mountain. A second helicopter trip was required to fly him to Vancouver for further care.

A report to the members of Whistler Council in November of last year indicated the helipad was used on average seven times per week over the course of an average year. In the off-season it is used three times a week and 10 times a week during peak season.

The landing pad at the medical centre needed work to bring it into compliance with Transport Canada standards.

Following an inspection by Transport Canada in December of 2009, the agency said a number of changes were needed. The federal agency demanded upgrades to the pad. The board wanted the height of nearby trees lowered along with the lowering of a light post.

To satisfy the Transport Canada requirements a number of trees were removed between Lorimer Road and Day Lot 4 earlier this year.

In conjunction with the resurfacing of the pad a new heating system was installed to deal with snow.

The helipad has been out of commission since April so all helicopter trips involving medical patients have been taking place at the municipal helipad at the north end of Whistler, north of Emerald.

The helipad issue at the health care centre surfaced following a December 2009 inspection of the pad by Transport Canada.