Little heat raised during question and answer period at first all candidates meeting
Oct 31, 2008 8:06 AM By: Claire Piech 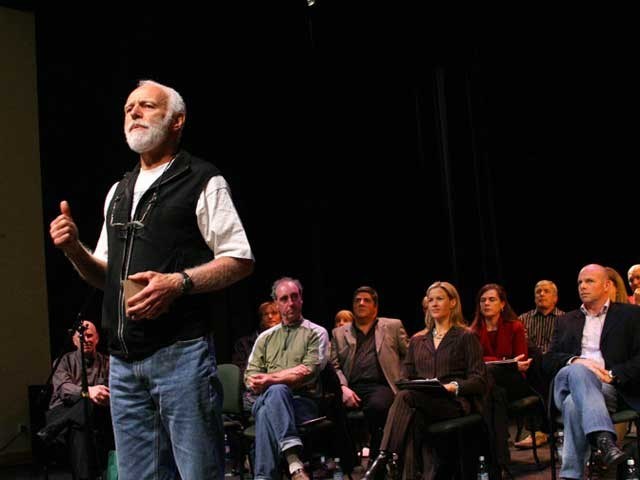 The public’s attention was fixated on mayoral candidates Kristi Wells and incumbent Ken Melamed during Tuesday’s first all candidates meeting, with a hefty number of questions directed at the two contenders.

“Tourism Whistler is not the vehicle to provide the arts, but Tourism Whistler brands and markets Whistler as a whole, and that includes every part of Whistler,” answered Wells, adding she did not fully agree with Melamed’s earlier response about Tourism Whistler’s shift away the arts and concentrating on its core business, putting heads in beds.

“Tourism Whistler is obliged and responsible to spend dollars and market the resort as a whole,” Wells said. “There is a seat on Tourism Whistler that is a municipal seat, and it is there to represent the municipality’s priorities. If arts and culture are municipal priorities, then they are obliged to have that as part of their program.”

Melamed, on the other hand, said he was not going to make any promises he couldn’t keep. The current shift away from the arts was a decision made by the Tourism Whistler board, and he did not have a lot of confidence that direction would change.

“There was a contentious decision to move away from that because the money needed to be invested into marketing,” said Melamed.

“It is about heads in beds. The representation of arts and heritage is going to fall to other community groups.”

Wells took heat earlier on in the evening, however, from community member Stuart Munro, who asked her why she delayed construction of the library during her last term on council for “self serving reasons”, which caused the construction budget to escalate.

Wells said while she supported the library unconditionally, she has a strong policy of fiscal management.

“I do not think I single handedly drove the library budget up. I think I showed fiscal responsibility. I was also concerned about losing the commercial component and that was the part I was most aggressive about,” she said.

The event marked the first Whistler all candidates meeting in this municipal election period. With five mayoral candidates, 17 candidates for council (three of whom were absent) and four of five school trustee candidates all on stage together, some candidates were only heard from during their opening remarks. Most candidates asked to speak during the question period had already held an elected position with the municipality or were well-known members in the community.

One of the first questions of the night asked council candidates Chris Quinlan and Stephen Milstein how they saw relationships among key stakeholders in the meeting evolving to incorporate the growth of arts and culture.

Quinlan said the community needs to find a business case to support the arts sector.

“We need to find a platform — whether it is an arts institute or a culinary institute — that can draw people here as a solid, year-round foundation for promoting arts and culture here in Whistler,” said Quinlan.

Milstein, however, recommended building a task force with members of the business community and the arts sector.

The theme of the evening, which drew about 125 people, was “art means business”, and audience members included representatives from the Whistler Arts Council, Whistler Museum and Archives, the Whistler Public Library, MY Millennium Place Society, the Whistler Film Festival and the Squamish Lil’wat Culture Centre society.

Other topics discussed during the night, chaired by Maureen Douglas, ranged from funding arts and culture, to the future of the museum and Millennium Place, and bringing in school or post-secondary institutions to Whistler.

Council candidates who did not attend were Grant Lamont, Will Pullinger and Shane Bennett. School trustee candidate Christine Buttkus also missed the evening.