Memorial plaque for Jeanie the bear laid on Whistler Mountain 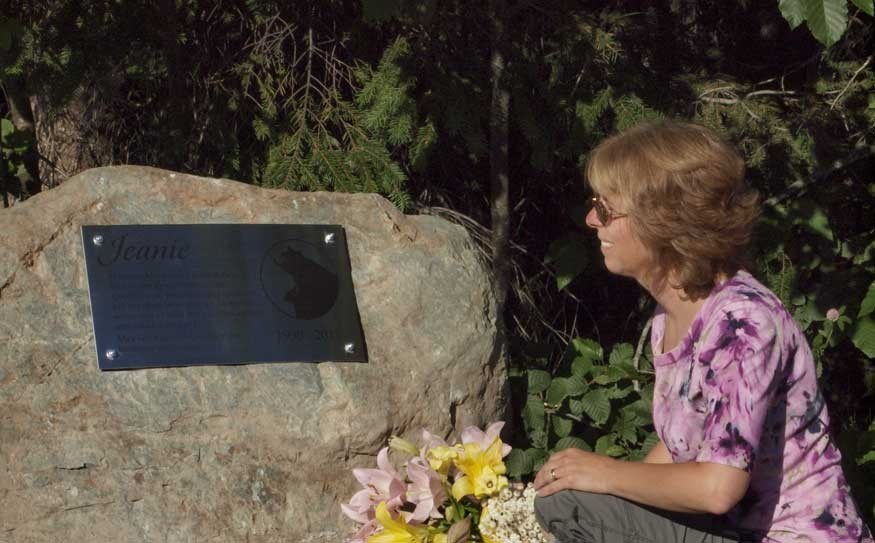 A PLACE TO REMEMBER: A memorial plaque has been placed on Whistler Mountain to commemorate the life and times of Jeanie the bear. Photo submitted

There are dozens of bears in the Whistler area at any given time, but few have had the same kind of impact as Jeanie. She was a regular sight for riders of lifts and gondolas, for people taking bear viewing tours and for locals out hiking and biking. With seven sets of cubs delivered in her lifetime, she was often in the company of young bears. She was featured on postcards, in picture books and documentaries, and was easily picked out of the crowd by the triangular white patch on her chest.

Last October, after a particularly bad berry season left bears hungry and looking for late-season forage, Jeanie was shot and killed by the B.C. Conservation Officer Service. She had been entering cook-filled kitchens to steal food and acting aggressively to people, often accompanied by her cub Jeanette, and it was decided that she posed a public safety risk.

It was a tough blow for local bear lovers, and people around the world who had come to know her.

Jeanie was buried on Whistler Mountain, where she spent so much time; a memorial plaque was attached to a rock marking her grave.”

Sylvia Dolson of the Get Bear Smart Society said it was important to honour Jeanie's legacy. The plaque is not easily accessible to hikers. However, bikers have easy access to it. It is directly across from the top of the Fitzsimmons Express chair near Olympic station and is directly adjacent to the forest edge about eight metres up the ski run.

"Jeanie's high tolerance for the presence of people allowed us a glimpse into the private life of a bear," she said. "She showed us the fierce, protective nature of a mother bear, and at the same time, the gentle, nurturing and playful side. She helped us realize the wide range of emotions that bears have."

While it's easy to think of bears as eating half the time and sleeping the other half, Dolson said that Jeanie, when fed, would play and seemed to enjoy herself.

"Jeanie always took time to play with her cubs, allowing them to use her as a jungle gym. She even played herself," Dolson recalled. "At one time, Jeanie had a little pond of water near Bear Paw, probably better described as a very large puddle, and she used to love to lay back in the pond and splash about."

Dolson said Jeanie's story also underlines everything that the Get Bear Smart Society is trying to achieve, and that's for people to take care not to attract bears into human areas where they can come into conflict with people. People who like bears may also be doing them harm by not chasing them off.

"Unfortunately, bears aren't chased off enough, so they don't understand that hanging around houses is inappropriate," said Dolson. "One day, when their behavior becomes intolerable to people, COs (conservation officers) are tasked with the responsibility of killing them. Sadly, a dead bear doesn't learn anything and the vicious cycle continues."