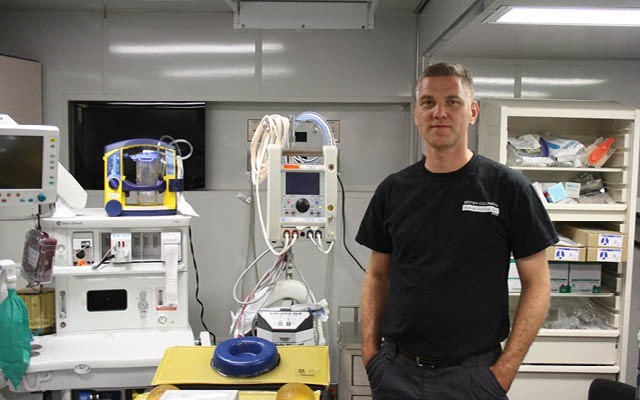 Peter Hennecke is no stranger to moving around.

As a former Military Operating Room Nurse, he spent time in Afghanistan, Bosnia and Haiti.

Which might explain why he feels right at home working with the Provincial Health Services Authority's (PHSA) Mobile Medical Unit (MMU).

"It's a very comfortable environment actually, to work in," he said in Whistler, where the MMU was stationed for the later half of Crankworx.

"It's air conditioned, it's very clean, so very different from Kandahar for sure."

As clinical operations director with the PHSA, Hennecke now spends much of his time on the road, criss-crossing the province in the MMU providing additional support wherever it might be needed.

"We were on the road 200 days last year," Hennecke said, during a tour of the MMU last week.

In the lead up to the final days of Crankworx, Hennecke and his team were preparing for the medical surge that usually accompanies such high-impact sporting events.

Last year during the event, staff at the Whistler Health Care Centre was just barely able to handle the volume during the annual mountain biking festival, which brings booming business to the resort.

Having the MMU on site, at the request of Vancouver Coastal Heath (VCH), provides some added insurance in a pinch.

"But it's more than just the unit itself. It's the people that come with it," Hennecke said.

For Crankworx, the MMU employed 15 on-call staff in addition to those already working in the Whistler Health Care Centre.

"It's a combination of Vancouver Coastal staff and a lot of clinicians within the Lower Mainland that are working in here, so that's what we come with as well," Hennecke said.

In terms of medical coverage, there's little that can't be done inside of the MMU.

"For the most part it's pretty similar to what you have in an emergency bay in the hospital," Hennecke said.

"The only difference is that space becomes a premium after awhile."

The 90-square-metre, expanded semi-trailer holds room for six to eight stretchers ideally, with a fully functional surgical bay near the front.

A legacy of the 2010 Olympic Games, the MMU has been touring the province since 2011.

"We've been to about 35 different sites now across the province, for everything from renovation support to emergency planning education (and) clinical missions," Hennecke said.

The cost of operating the unit — a little over $800,000 annually — is split amongst the province's six health authorities, and Hennecke and his team try to make at least one stop in each region every year.

The team started the month of August in Penticton for the Boonstock Music and Arts Festival before heading to set up at the Squamish Valley Music Festival.

From there it was a straight shot to Whistler, where Crankworx awaited.

And just like you might have to do if you were working in Afghanistan or earthquake-stricken Haiti, the key to success in the MMU is the ability to roll with the punches.

"That's probably the biggest lesson for people that work out of here," Hennecke said.

"It may not be exactly how you love things, but just adapt. Be flexible and work with it."

VCH could not provide the patient numbers seen at the MMU during Crankworx before Pique's deadline.