More than 100 protesters come out for Woodfibre LNG meeting 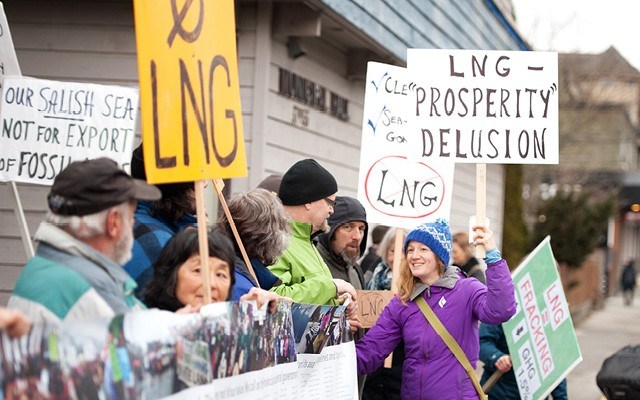 Organized by environmental activist group My Sea to Sky, demonstrators from across the region gathered on Friday, Jan. 27 to make their opposition known to Woodfibre's planned LNG project.

Whistler's John Wood, 65, made the trip down Highway 99 with his wife, and explained his reasoning for attending.

"I just see the danger in us getting onboard with a sunset industry," he said. "Everybody seems to be pretty much agreed that fossil fuel use is contributing to this coming catastrophe of climate change, and we've got to do something about it."

The focus of the meeting, attended by representatives from local, provincial and national governments, including Sea to Sky MLA Jordan Sturdy and MP Pamela Goldsmith-Jones, centred on communication with the public and improving transparency, and also provided Woodfibre with a chance to present an update on the project.

"One of the (province's) conditions, condition 25, which is how the project is monitored — what is the status of the conditions and the monitoring?" said Sturdy, discussing the goal of the meeting outside municipal hall. "This is about trying to better understand the impact of this and better monitor the impacts."

Members of the public and media were barred from attending the meeting, an irony that was not lost on Tracey Saxby, co-founder of My Sea to Sky.

"It's really concerning when they're inviting all of the mayors, Indigenous leaders, and representatives from the province and federal government to enhance transparency around a project when the media and public is not invited," she said. "They are listening to us and acknowledging there's a problem with the way the process has been working... but it calls into question all the decisions that have been made to date."

Woodfibre LNG's VP of corporate affairs Byng Giraud said his company did not set the terms of the meeting, which was organized by North Vancouver MP Jonathan Wilkinson, and was happy to share the project update publicly. (Woodfibre forwarded a copy of its presentation to local media.)

Woodfibre also set up a beta version of an online portal last week where the public can view updates to the project, as well as the remaining permits and conditions the company has to meet.

"How do we keep people informed in a more live manner as to whether we're carrying out those conditions? I think it's something governments are struggling with; you have these technical processes, but how do people understand them, how do they trust them?" Giraud said of the portal. "We agreed to come and participate and talk about that and put up (the portal) as an example, but I think it's definitely a work in progress."

Last week Woodfibre filed an amendment to its Environmental Assessment in order to meet one of the Squamish Nation's conditions to switch the LNG plant's previously planned seawater-cooling system to air-cooling. A decision on the amendment is anticipated for early spring.

With a provincial election looming, Saxby is worried that B.C. Liberals — who've long touted the LNG sector as a boon for the economy and the logical alternative to coal — will simply "rubberstamp" the project in spite of considerable local opposition.

"I think they're trying to get as many permits ticked off as they possibly can before the election because there's a real risk (Premier) Christy Clark's Liberals aren't going to get elected again," she said.

-With files from Jennifer Thuncher of The Squamish Chief