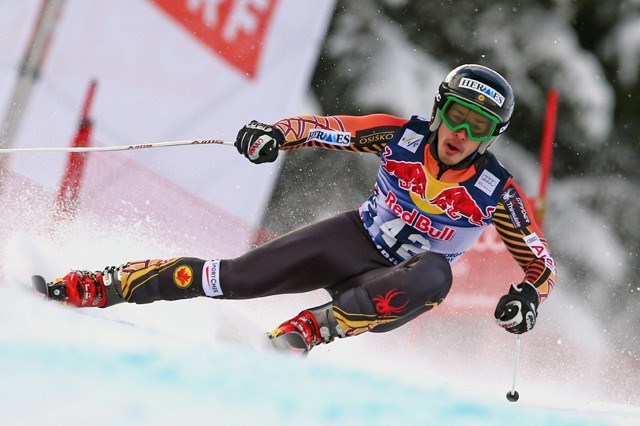 Whistler's Morgan Pridy was named to the Canadian alpine ski team for next month's Olympics on Monday, as was fellow local racer Mike Janyk. Photo by Pentaphoto/Alpine Canada

Morgan Pridy will be headed to his first Olympic Games and Mike Janyk will be travelling to his third after both local skiers were named to Canada's alpine ski team headed to Sochi on Monday, Jan. 27.

Both Pridy and Janyk recorded their best results of the World Cup season over the weekend at Kitzbühel, Austria, which hosted the final races of the Olympic qualification period.

Pridy, 23, needed two top-30 results this season to earn an Olympic nomination through Alpine Canada's "young stars" criteria, and his 21st-place finish in the Sunday, Jan. 26 super-G from Kitzbühel marked his second finish in the points this winter. He also recorded a top-30 finish at Beaver Creek, Colo., earlier in the season.

Janyk netted a 14th-place finish in the men's slalom held Friday, Jan. 24 at Kitzbühel, his first time in the top 15 this season. He's headed to Sochi looking to earn his third-straight top-20 slalom result at an Olympics, having finished 17th at Torino in 2006 and 13th at Whistler in 2010.

Both skiers are currently in Europe and were not immediately available for comment.

Pridy and Janyk join fellow Whistler Mountain Ski Club alum Manuel Osborne-Paradis on the team of 12 skiers who will race for Canada in Sochi. Osborne-Paradis received his nomination to the squad earlier this season.