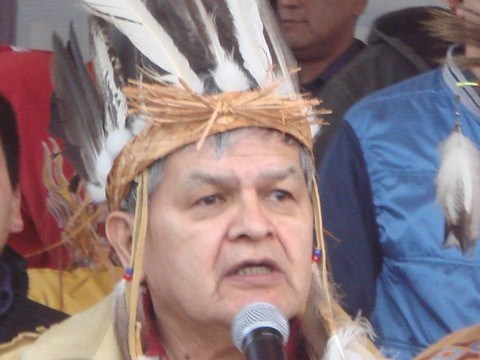 The Mount Currie Band has seen stiff competition emerge for its upcoming election, with 14 candidates for chief and 69 for council.

Notably absent from this year's ballot is Leonard Andrew, the incumbent chief councillor who served four straight terms on council, as well as another four terms between 1981 and 1989.

With Andrew gone, 14 people are stepping into the void the longtime chief leaves. Among the candidates standing for the position is Allen Stager, who served as Chief Councillor before Andrew did. In that role he served alongside Squamish Chief Joe Mathias on the board of directors for the 2010 Bid Corporation.

Last July, Phillips got some outside media attention for her initiative to clear neglected dogs running free in Mount Currie's streets. The initiative saw volunteers take 28 dogs off the street and deliver them to WAG in Whistler or various SPCA facilities.

As chief councillor, both the leader and the spokesperson for Mount Currie, she wants to unite her community.

"We're so divided right now," she said. "My one goal is to work together as a community and not have the division. You'll always have that, but I think just in the last four to six years, our community has really divided for some reason and I would like to work on that within the community."

Asked what's caused the division, she pointed to the Olympics and the varying political opinions that have risen up around the international sporting event.

"Within a close-knit community where everybody knows everybody, that tends to take a toll," she said.

Greg Bikadi, former president of the Lil'wat Business Corporation, is also running for chief. He oversaw the department as the band helped produce concrete barriers as part of the Sea to Sky Highway Improvement Project. Joanne John, one of the leading band members who helped establish the joint Winds of Change committee with the Village of Pemberton in order to address issues around drug and alcohol abuse, is also running.

All current members of council are running for their positions again except Morgan Wells, Joanne John and the late Bruce Edmonds, who was found dead from an apparent suicide on February 10, 2010, and according to the Lil'wat website has not been replaced on council.

Josh Anderson, a front-line coordinator at the Squamish-Lil'wat Cultural Centre, is among the candidates seeking their first terms on council. In a Monday interview he said he was first nominated for council in the 2009 election and came very close to winning.

Now on the ballot again, he said he wants to try for some positive change within his community because people are looking for new faces to act as their leadership.

"I just wanted to try for positive change for people in our community," he said. "People are looking for some younger, fresher faces on the council."

Other candidates for council currently include Christine Andrew, daughter of Chief Leonard Andrew; Hayden Leo, one of seven community members who ran with the torch during the Olympic Torch Relay last February; and Alex Wells, a three-time world champion hoop dancer.

The deadline for candidates to decide whether or not to withdraw is January 26.