Mountain News: After all these years, still short of cheaper housing

TELLURIDE, Colo.—Despite an aggressive program of building affordable housing in Telluride for at least a couple of decades, it's just not enough. The town council there has been talking about new taxes to provide money for additional housing.
Aug 1, 2018 6:00 PM By: Allen Best 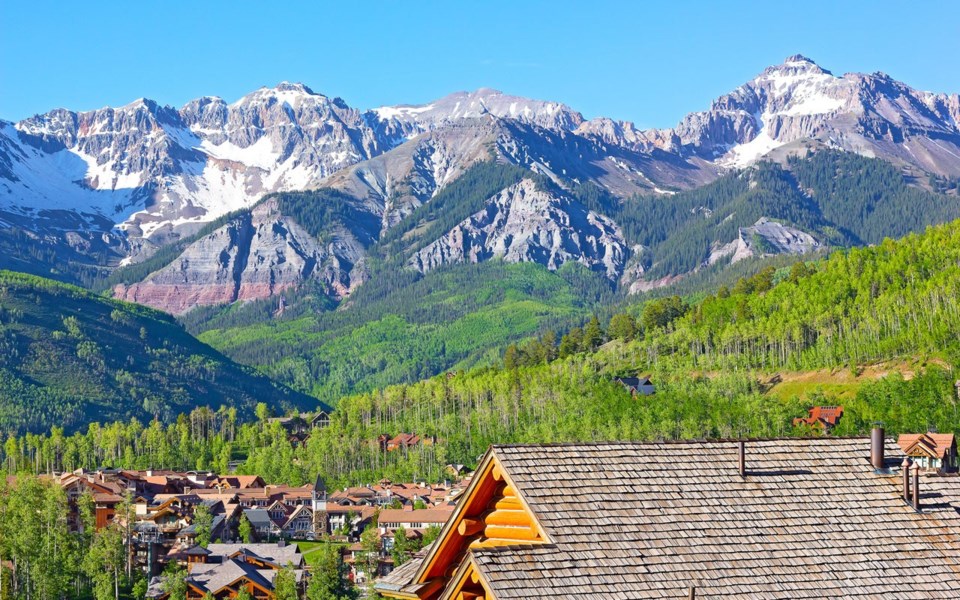 TELLURIDE, Colo.—Despite an aggressive program of building affordable housing in Telluride for at least a couple of decades, it's just not enough. The town council there has been talking about new taxes to provide money for additional housing.

One idea is to add a property tax. A second idea is to add a sales tax on short-term vacation rentals other than on hotels. Sales on hotel rentals are already assessed a half-cent sales tax, as they have been since 1995, along with all other sales in Telluride. The money is dedicated to affordable housing mitigation.

The Telluride Daily Planet reported some pushback to both proposals for added taxes. "We believe this will result in more dark rooms and dark homes," said Bas Afman, representing the Telluride Lodging Association. His organization wants a more comprehensive plan to increase funding, with taxes to come more broadly than the short-term rental tax. Another speaker urged regional collaborations.

Sean Murphy, the mayor, supported both taxes and doesn't think the higher taxes will discourage tourism. But where to build affordable housing.? Todd Brown, a council member, noted that Telluride is running out of space for new affordable housing projects. He, too, sees benefit in having a regional approach to affordable housing.

"There's a lot of diversity in the housing they produce," she told Mountain Town News. "It's sustaining various sectors of their economy. They don't just target the ski resort employees, for example."

About a third of residents in the Telluride area live in housing that has been deed-restricted in an effort to keep it affordable. Telluride, the town, is connected by gondola to Mountain Village. Along with San Miguel County there have been various collaborative housing efforts in the past.

Non-coal locomotives to be used

DURANGO, Colo.—Do you need steam and smoke to make a trip on a narrow-gauge railroad authentic?

That's the question posed by the Durango and Silverton Narrow Gauge Railroad's purchase of two diesel locomotives. It also plans to retrofit a third coal-burning steam engine to instead burn oil.

For 136 years, coal-powered steam locomotives have been chugging along the rails between Durango and Silverton, the one-time mining town. Since the mining era ended, the payload has been tourists, now up to 193,000 a year.

But the 416 Fire that erupted on June 1 along the tracks near Hermosa, about 16 kilometres north of Durango, caused the railroad's owner to institute a change when fire conditions are high, as they were then.

Eyewitnesses claimed they saw embers from the passing train create the fire at about 10 a.m. The Forest Service said only that the cause of the fire that burned 54,000 acres by late July is still under investigation.

This was despite extensive fire mitigation work along the tracks each year. In addition, each departing train is followed by two fire-patrol motor cars that carry a water tank and fire pump. A helicopter has also been added to follow the train on its 72-kilometre run to Silverton. All of this has occurred for the better part of a decade.

Al Harper, the owner of the railroad, told the Durango Telegraph last week that the new locomotives being manufactured in South Carolina that do not spew embers. "We want to be good neighbors," he said.

One railroad enthusiast in Chicago, told of the change by Mountain Town News, expressed disappointment. He said the authenticity of the steam-powered locomotive was responsible for at least a quarter of the trip's value.

Christian Robbins, marketing director for the Durango and Silverton, said polling conducted in previous years found that for a majority of customers the scenery is what draws them, not the historical accuracy of the locomotives.

For 90 per cent of customers, the steam-powered locomotives are not central to their interest. Fans of historical accuracy will be advised to plan trips when fire danger is low. The trains operate year-round, but 90 per cent of business occurs from May through September. The trains to Silverton continue through October. During winter and early spring, trains go only about halfway to Silverton, to Cascade Canyon.

The train had to cease operations for an extended period during the fire. Then mudslides resulting from the fire damaged the tracks, forcing abbreviated train rides.

But switching to diesel or oil-powered trains, even if just during periods of high wildfire risk, will require different marketing, said Robbins. Marketing materials in the past have emphasized the coal-fired steam locomotives. That will be replaced by an emphasis on other aspects of the train-riding experience.

Missy Votel, publisher of the Telegraph, said she thinks most locals see this investment in non-coal as a positive. "While people appreciate the train's historic nature and the benefits it—and the Harpers—have brought to the community, this summer is one we'd all rather not have to re-live," she said.

The Cumbres & Toltec has never caused a major fire in its 47 years of operations. However, as is common with steam railroads, very small fires have occasionally occurred, reported the railroad operator in a position paper. But these have been swiftly extinguished using fire safety measures.

LOS ANGELES, Calif.—The Los Angeles Times reported that scientists are starting to link rising temperatures and increased wildfires, something they were reluctant to do in the past.

"The regional temperatures in the western U.S. have increased by two degrees since the 1970s," said Jennifer Balch, director of Earth Lab at the University of Colorado, Boulder. "You're seeing the effect of climate change."

"Unusual warmth is now routine," and that heat "leads to drying things out quicker," said Neil Lareau, assistant professor of atmospheric sciences at the University of Nevada, Reno.

The Times noted the grim totals in California from San Diego to Yosemite to the Carr fire near Redding that has killed six people in recent days: extreme heat, the likes of which have never been seen in the modern historical record.

"The temperatures have just been almost inexorably warmer all the time," said Daniel Swain, of the University of California, Los Angeles. Fires, he added, "burn more intensely if the fuels are extremely dry."

Swain said there were alerts about record or near-record dryness in the vegetation just before each of the major fires of the last year.

But won't increasing temperatures also bring more precipitation? In some places, yes, but Swain points out that Northern California saw its wettest winter on record in 2016-2017 followed by its warmest summer—and then the devastating Santa Rosa fire north of San Francisco.

"Temperature can clearly out-influence the precipitation," he said.

John Abatzoglou at the University of Idaho was the lead author on a recent study that concluded human-caused climate-change was responsible for more than half of the increase in dry vegetation in the western United States since the 1970s. The area charred by fire has doubled since 1984.

Scientists point to the increase in nighttime temperatures. This means the chance of a blaze weakening overnight is reduced. In 1895, California's average summer minimum temperature was 13.6 degrees Fahrenheit. Last year, it was 16.6 degrees.

Highest temperatures in its history

INCLINE VILLAGE, Nev.—Water temperatures in Lake Tahoe reached 20.2 degrees in July 2017, the warmest ever recorded, according to a new report issued by the UC Davis Tahoe Environmental Research Center.

Geoffrey Schladow, director of the research centre, told the Reno Gazette-Telegraph a complex story of a lake that was long in decline because of environmental abuse now being buffeted by warming temperatures.

Warming water temperatures, he said, are contributing to a greater stratification in the lake water, Essentially, the division between layers of warm water near the surface and cooler, deep water gain strength. The result is less natural mixing. That increase in stratification helps to keep sediment that washes into the lake suspended higher in the water column, reducing clarity.

The lake pours over its rim at Tahoe City, a few kilometres from Squaw Valley. There, the daily minimum air temperature during the last century has increased about 2.5 C. The average maximum temperatures has increased less than one degrees.

Since 1911, the number of days in which average air temperatures stayed below freezing has decreased by 30.

There's a different hydrology brought on by warming temperatures, explained Noah Diffenbaugh, a professor of earth science at the Stanford Woods Institute for the Environment.

"Warmer conditions create more severe hot conditions during the warm season, less reliable snowpack, greater increase of flood risk during the rainy season," he told the Gazette-Telegraph. "From the perspective of California's climate, we are seeing the changes that have been predicted for three decades; we are seeing those unfold."

Photographer gets license to hunt grizzly, but will not use it

JACKSON, Wyo.—Unless it gets slowed or blocked by lawsuits, Wyoming will conduct its first hunt of grizzly bears in 44 years. To that end, it accepted applications from 3,500 Wyoming residents and 2,327 non-residents to become among the 10 licenced grizzly hunters.

Among those top 10 with hunting licenses will be Tom Mangelsen, a wildlife photographer described as a "famous and fierce critic of grizzly bear hunting who has made a career of photographing the big bruins." He has no intention of shooting a grizzly bear with a gun.

Mangelsen has a gallery in Jackson, Wyo., but also two in Denver, one each in Park City, Utah, and Steamboat Springs, Colo., along with three other locations across the country.

The Jackson Hole News&Guide explained that Wyoming wildlife officials will allow up to 10 grizzly hunters in the field starting Sept.1 5. The hunt in which Mangelsen's possible tag is valid will close after the first female bear is killed. Up to 10 male grizzlies can be killed.

"I've watched a hell of a lot of bears over my adult life, and I cannot tell the difference between male and females at 100 yards, 50 yards even," Mangelsen said. "I don't know how they're going to do it."