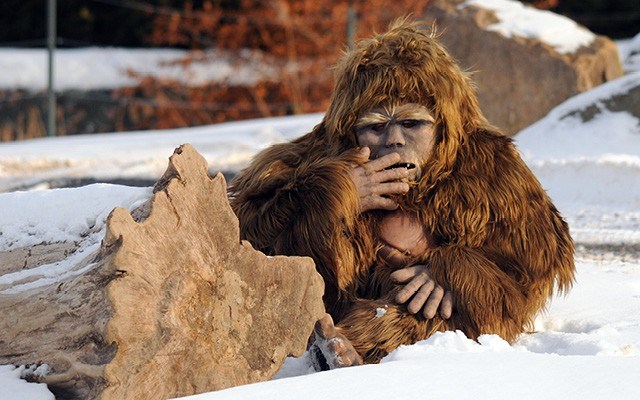 GLACIER NATIONAL PARK, Mont. — Tom Biscardi owns a live tribute show to Elvis Presley and Michael Jackson that has been performed in Las Vegas and Reno.

At one of the gateways to Glacier National Park, he hopes to create a new novelty act, a 100-room hotel and museum centred around Bigfoot, the mythic creature.

"Bigfoot is just like Elvis Presley and Michael Jackson," Biscardi told the Flathead Beacon. "Everyone has heard of them."

With Bigfoot as the model, the mind races to imagine all the applications of the Bigfoot theme in hotel rooms.

The hotel is to be located at East Glacier Park Village, where the Great Plains sweep up into the serrated peaks of Glacier National Park. He said there's a byway in the area, called the Rocky Mountain Front, which originates in Alberta, but he declined to give a precise location for the migratory corridor for Bigfoot, also called Sasquatch.

On the west side of the park, which was hit hard by forest fire in August, crews have completed stabilization of Sperry Chalet. Massive wooden joists flown in by helicopter were used to brace the stone masonry walls, gables, windows, and chimneys of the century-old, Swiss-themed chalet in the backcountry between Lake McDonald and Logan Pass.

Whitefish talking about the risks of forest fires

WHITEFISH, Mont. — With the fires and smoke of summer fresh in mind, a meeting is being held in Whitefish to go over the risk of wildfire and the public health impacts of smoke.

Joe Page, the fire chief in Whitefish, told the local newspaper that the essential point of the meeting is that all of Whitefish is within what is called the wildland-urban interface.

"While you may not have a huge number of trees in your yard or around your home, the fact is that we all live within range of an ember shower. Embers from a nearby wildland fire (are) what burn down homes," he said.

He told the Whitefish Pilot a number of things can be done to reduce the risk, but even small simple steps will have a huge impact.

The fire department and the local climate action committee are sponsoring the meeting. Those in western Montana should expect hotter, drier summers in the future with longer and more intense fire seasons, according to a new climate assessment published by scientists from the state's two largest universities.

PARK CITY, Utah – Utah's Summit County has joined the growing chorus of communities across the United States enunciating goals for sharply reduced use of carbon in their electrical, transportation, and building sectors.

The goals adopted by the county commission in early October call for 100 per cent of all electricity for government operations by Summit County to come from non-carbon sources by 2032. That falls short of the 100 per cent renewables adopted by some communities, because it only applies to the one local sector of government.

However, the goal adopted by the five elected officials calls for a much deeper 80 per cent reduction in emissions by 2050 as compared to 2014 levels, but applied to the county residents, businesses, and visitors altogether. This includes Park City and its two big ski areas, Park City and Deer Valley.

How will they get there? Currently, 30 per cent of greenhouse gas emissions come from electricity and 47 per cent from transportation, with most of the balance coming from buildings and other land uses.

The commissioners talk about the need to convert transportation to electric vehicles supplied by renewable energy. Energy efficiency will also be pursued through changes to development codes, retrofits for existing buildings, and other means.

Park City and Moab have both adopted 100 per cent renewable goals, as has Salt Lake City.

Summit County's resolution cites the risk of a warming climate to the environment and economy of local residents.

Wounds inflicted a century ago getting addressed now

DILLON, Colo. — A century ago, the bloodbath of the First World War was underway in Europe. In Colorado, the Jumbo Mine was in the midst of three years of extraction of gold, copper, lead, and silver from a mine about 11 kilometres east of Keystone Resort.

The war is long over, remembered now in sad poems and battlefield cemeteries. The mine is remembered, too, because water that washes over the rocks exposed by the mining degrades, result in high levels of suspended and dissolved lead, zinc, and other metals in Peru Creek.

The Summit Daily News reported that the Environmental Protection Agency is cleaning up the site now, at least partly by diverting water flows from around mine tailings into a lined ditch.

The EPA, working with Summit County and a state mining reclamation agency, completed cleanup of the Pennsylvania Mine, located in the same vicinity, in 2016.

ASPEN, Colo. — A new program in Aspen aims to help front-line employees in bars and restaurants identify and intervene in potentially dangerous situations that could lead to sexual assaults.

The program, called Intervention Training, is sponsored by a non-profit organization in the Roaring Fork Valley that is dedicated to supporting victims of sexual assault and domestic violence.

Why bars? As gathering places where alcohol is readily available, they provide the environment a sexual aggressor may use as a staging ground for selecting, isolating, and even incapacitating their targets, presenters for an upcoming class told the Aspen Daily News. One tactic used is to get potential victims drunk and away from their friends.

Alpine coaster to open in time for Xmas

SNOWMASS VILLAGE, Colo. — The Aspen Skiing Co. is completing its Lost Forest coaster just in time for winter. The coaster, to begin operations on Dec. 21, will start near the top of the gondola at the Snowmass ski area and descend 137 vertical metres.

Like Vail, Breckenridge, and other resorts before it, the alpine coaster at Snowmass will be accompanied by a new challenge course and a canopy tour. The canopy tour will have nine ziplines, explained the Aspen Daily News. Also planned is a climbing wall, to be completed next year.

In Steamboat Springs, a brake on the alpine coaster failed, causing one car to hit another with sufficient force that medical attention was sought, reported Steamboat Today. The coaster has 1900 metres of track, said to be the longest in North America. It opened Sept. 7.

JASPER, Alberta — A 46-year-old man has been fined $500 for leaving his dog unattended in the hot cabin of his pickup truck.

The Jasper Fitzhugh said constables arrived on July 31 to reports that the miniature dachshund was in the cab and the windows were rolled up. The owner of the pickup and dog arrived just as a towing company had succeeded in unlocking the door and removing the dog.

Police have stressed that it's not OK to break the window of a vehicle to save a dog. Instead, they said, call the police.

EDWARDS, Colo. – A messy case continues at Cordillera, the ridge-top resort best remembered as the place where the basketball player had sex with a hotel worker. Whether it was consensual was at the root of the national uproar in 2003. A settlement was reached out of court.

This time, the dispute is about whether a proposed treatment centre for people with addictions should be allowed. Homeowner groups and a local government district at the resort have both fought it. But they have not been playing fair, alleged a lawsuit filed by the project proponent, CSNM Investments. The company claims to be spending $136 million to turn the lodge and spa into a high-end health, wellness, and addiction-treatment centre.

The basis for the claim is that the homeowners' groups and the local government have violated the Americans With Disabilities Act, because they are discriminating against the addicted.

The lawsuit cites one of the emails sent by opponents: "This is a neighborhood, not a health care farm." And another: "Heroin addicts moving in with other unbalanced individuals and the predators that surround such facilities."

SOUTH LAKE TAHOE, Calif. — Elected officials in South Lake Tahoe have given staff members the authority to put together the language for a ban on polystyrene. Some 100 communities in California have such bans.

Lake Tahoe News reported that the idea of a polystyrene ban was broached in 2013, when a ban on plastic bags was being discussed. However, the idea did not go forward.

The ski town of Avon, Colo., at the base of Beaver Creek, has also been considering a ban on polystyrene products, but the proposal stumbled when it was made clear to authorities that polystyrene and Styrofoam are not necessarily one and the same.

As Wikipedia explained, Styrofoam is a trademarked brand of closed-cell extruded polystyrene foam. But the same word, if not capitalized, is often used in the United States and Canada to refer to expanded (not extruded) polystyrene foam, such as in disposable coffee cups, coolers, or cushioning material in packaging.

Polystyrene is nearly ubiquitous. It is used to make disposable razors, for example, and is also used in ovens, vacuum cleaners, and refrigerators, as well as in cars.

DURANGO, Colo. — Southwest Colorado has been designated a "food insecure" area by the U.S. Department of Agriculture, making it eligible for funding to help grow and distribute more local food.

The Durango Telegraph wrote that US$229,000 has been awarded to Southwest Farm Fresh Cooperative. The Cortez-based cooperative will use the money during the next three years for a new walk-in cooler and other upgrades. Started in2014, it has 20 farmers and other producers within a 322-kilometre radius, the most distant being an orchard at Hotchkiss.

The co-op's website said the mission is "to aggregate, store, market and distribute locally produced agricultural products from farms and food businesses of southwestern Colorado. The cooperative's successes will be measured by our ability to be economically viable, socially responsible and good stewards of the land and community."

The U.S. Department of Agriculture website defines low food security as when there are reports of reduced quality, variety, or desirability of diet. The agency's criterion is that there is little or no indication of "reduced food intake," what used to be called hunger.

Another organization, Local First, is getting $356,000 from the federal government to help coordinate local fruit-and-vegetable-gleaning efforts. At least one element of the program seems to be to get fruits and vegetables into willing hands and hungry mouths before they rot or are snagged by bears.