CANMORE, Alberta – Life is returning to normal in the Bow River Valley, home to Banff, Canmore and, out on the prairie, Canada's third largest city, Calgary.
Jul 3, 2013 9:00 PM By: Allen Best 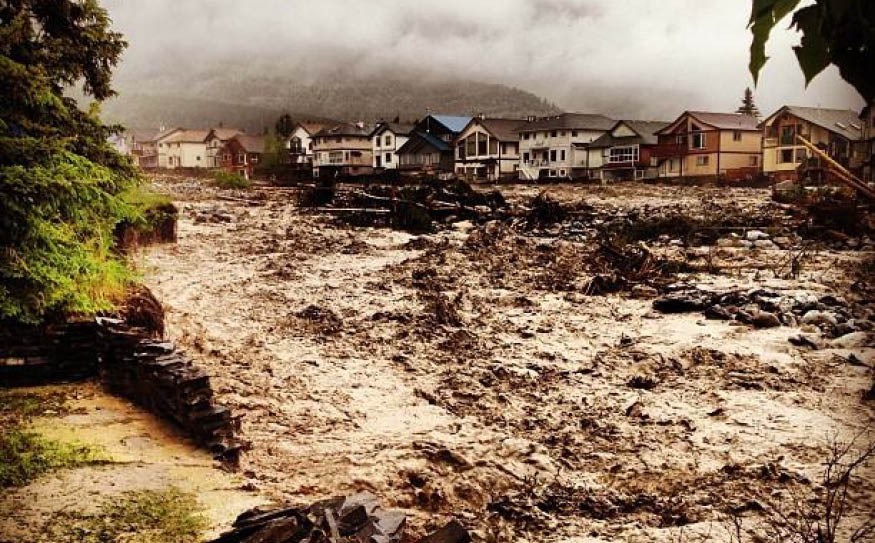 CANMORE, Alberta – Life is returning to normal in the Bow River Valley, home to Banff, Canmore and, out on the prairie, Canada's third largest city, Calgary.

Up to 220 millimetres of rain drenched the foothills of southern Alberta in just 36 hours, which also had the effect of melting the remaining snow.

Wade Graham, one of those creek-side residents, told the

Calgary Herald that he woke up at about 3 a.m. on June 20 to the sound of a terrible "rumbling and groaning" from the creek. From a neighbour's house, he watched the frothy river. "It looked like chocolate milk flowing down the dike," he said.

The flooding closed both the TransCanada highway and the Canadian Pacific railway. Amazingly, no homes were lost, although some foundations seem to have been exposed by the floodwaters.

Banff this past week announced it was still in business and planning to host the annual Canada Day Parade on July 1. A week after the floods, the highway had been restored to two lanes. Four is normal.

The Rocky Mountain Outlook says that the backcountry infrastructure — the hiking trails and bridges — had been badly damaged by the torrents. However, the Lake Louise area of Banff National Park and adjoinined national parks were less drenched.

What to make of the deluge? Various newspapers noted the forest fires of Colorado and the beach-like temperatures for the Yukon, with the floods of Alberta between them.

To at least some environmentalists this is proof of the changing climate — and a compelling argument for Canada to back off its insistence on developing the oil/tar sands.

"I only hope my city's nightmare is the climate-change wake-up that Alberta, and Canada, needs," writer Andrew Nikiforuk told The Economist from his base in Calgary, where several feet of water had flooded the base of the gleaming new towers built by oil companies.

But a federal official cautioned about drawing a line between accumulating greenhouse gases and the extreme weather.

That official was right. Most scientists have been hesitant about connecting those dots, because weather has always been highly variable.

But yet there is a lively conversation going on among scientists about whether extreme weather can be linked to the human-caused sources. Dave Phillips, a climatologist with Environment Canada, told the Edmonton Journal of increasing attention to the changing jet stream.

The jet stream usually rushes rapidly from west to east in a mostly straight direction, more or less around the Canada-U.S. border, the newspaper explains. But lately, it's been wobbling more erratically.

"What we're seeing now is more of the dipping and the diving, looking more like a roller coaster than a ribbon," said Phillips. "When that happens, it tends to kind of slow down. It doesn't move as energetically as it did and so therefore the weather can back up."

The jet stream is about 14 per cent slower in the fall now than in the 1990s, according to a recent study by a scientist from Rutgers. At the same time, the temperature gradient between the Arctic and equator has weakened.

CREEDE, Colo. – Creede and South Fork are like ski towns of old, except that they normally flourish during summer and then hunting season. But this year, because of fires nearby, marshals ordered the evacuation of South Fork and have allowed visitors to travel to Creede, located 22 miles away, only when escorted.

After a week, residents of South Fork have been allowed to return, but The Denver Post delivers a predictable report of anguish and despair as the two towns contemplate going into the Fourth of July with a pall of smoke over them.

"We have to call it what it is," said Creede Mayor Eric Grossman. "This is a disaster."

The paper says Grossman has temporarily shut down his restaurant and is pushing for state aid for his and other stricken businesses.

PARK CITY, Utah – More Chinese visitors have been visiting Park City. Mayor Dana Williams discloses that the resort city has hosted just under 1,000 visitors in the last year. He has made two visits to China recently, pushing Park City as a destination.

Bill Malone, president of the park City Chamber/Bureau, says his organization is just into the beginning stages with outbound Chinese tour operators.

"We feel this business will flourish over time," he says. "Just like other markets we do extensive business with — Brazil, Australia, Germany, Mexico and the UK, among others — we anticipate a steady maturation of the market as Chinese visitors branch out from visiting the traditional "big city" destinations of the United States."