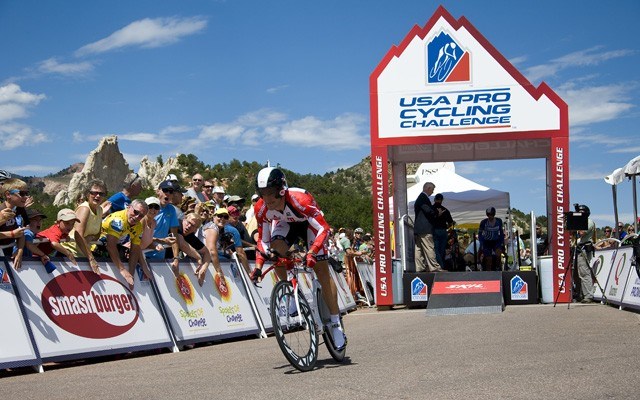 SPINNING THE WHEELS Despite reaching a television audience of more than 15 million, the USA Pro Challenge is struggling to find financial backers. Shutterstock photo

But after five years, reports Jason Blevins of the Denver Post, the event still lacks a title sponsor that will keep it alive. Losses for the bicycle races have dropped from an estimated $10 million the first year to $2 million this year.

In this quest for financial sustainability, the USA Pro Challenge is hardly alone, reports Blevins. Bike races across the world often struggle to find and sustain sponsors.

There may be additional problems for this event. It was launched and is owned by Rick Schaden and his father, Richard, who launched the Smashburger, Quiznos, and Live Basil restaurant chains. Rick Schaden's business reputation has been marked with contentious lawsuits. One unnamed source, identified as "one of the most influential players in Colorado's tourism industry," said: "A lot of people have looked at this race, but they have shied away from any association with the owners."

Steve Maxwell, a business analyst and cycling advocate, sees a broader problem. "You can target a very attractive demographic with bike racing, but apparently that demographic is not big enough to bring in the really big sponsors," Maxwell said. "And unfortunately the sport keeps shooting itself in the foot with the doping allegations. All that eventually translates into sponsorship troubles."

Colorado's last big bicycle race was sponsored by Coors, the brewing company based in Golden, just west of Denver. The race series ran from 1979 to 1988, when it died — after Coors pulled its support.

The Schadens have homes in Aspen, and the town has been on the race circuit every year. As do other host towns, it also pays for the privilege, this year at a cost of $300,000 in cash and in-kind services, including $50,000 worth of room nights for racers and support staff. About half of the money came from Aspen's city government, reports the Aspen Daily News, citing a city memo.

What does Aspen get out of this? Not necessarily a bump in receipts at cash registers, at least not directly. But last year's event gave the Aspen area two-and-a-half hours of television exposure. That coverage reached 15 million in Europe. In the United States, cable ratings were comparable to an NHL hockey game or an MLS soccer game, according to Aspen special events director Nancy Lesley.

LEADVILLE, Colo. – Will Leadville ever be able to carve out a good living as a tourist town? It was a mining town for so long, until the giant molybdenum mine straddling the Continental Divide at Fremont Pass, 20 kilometres distant, closed in 1981.

With that economic collapse, there was a mass exodus from Leadville — and plenty of cheap rooms for people working in the Vail Valley and Summit County, 30 to 45 minutes away.

Could Leadville gain a new existence by hosting summer running and bicycling events? Writing in the Denver Post, Joey Bunch reports only so-so results. Certainly, Leadville has gotten on the national map for something other than mining. The Leadville 100, starting from an elevation of 3,133 metres, draws some of the world's best athletes.

But the racers come and leave. It's partly because there's not much at Leadville to keep them there, other than the magnificent mountains and the brightly painted Victorians. The town has just eight motels, most of them not the sort that are favoured by modern travellers.

Further, Leadville isn't exactly flush. One indicator: 67 per cent of the schoolchildren in Lake County qualify for free or reduced lunches, compared with 42 per cent statewide.

In his research, Bunch also found a conflict about just what sort of tourism Leadville should seek. Some, says municipal judge Neil Reynolds, indicate that the town should make a consistent pitch for people interested in history, and that the athletic events get in the way of that appeal.

"If the races were as good as they say it is for the economy, we'd be seeing new hotels and restaurants. But anybody with any business sense knows you can't operate a year-round economy based on four weekends a year," Reynolds said. "But you can ruin one."

This discussion is different than those during the 1970s, when Climax, the mine, had more than 3,000 employees and the mine provided a huge property tax base, dwarfing the tax rolls of Aspen, Vail, and Summit County.

Climax reopened permanently in 2011, but employs only 350 people, a tenth of the former staff — and has a hard time finding people with mining skills.

ASPEN, Colo. – Aspen remains determined to be a transformative force in the world of energy.

Having substantially achieved its goal of renewable energy for the municipal utility, city officials say they may seek to create a net-zero energy city hall and police station. Also on the agenda is helping transform transportation to reduce greenhouse gas emissions.

The drive toward renewable energy began in the 1980s, when the city retrofitted a local dam with hydroelectric turbines. Electricity from that and other hydroelectric sources now provide 50 per cent of the electricity for Aspen Electric. The municipal utility serves 6,000 customers, or roughly half the town of Aspen, but none of the ski area. Another 49 per cent of the electricity comes from wind turbines on the Great Plains. A small portion is to come from landfill gas in Iowa.

The main message from town officials is to be patient and hunt for local opportunities for renewable energy first.

Despite this success, Aspen's greenhouse gas reductions have not dropped as fast as the town had hoped. Emissions from transportation have actually increased.

Speaking at the Aspen Renewable Energy Day conference, Mayor Steve Skadron said one of the city council's major goals is to facilitate a transition to electric transportation. He also said the city is considering how it might create a net-zero energy building if it replaces its existing city hall and police station.

DURANGO, Colo. – Just how toxic was the spill of water from a gold mine into the Animas River?

Not as much as you might think, say government officials. Within a week of the spill, Colorado Gov. John Hickenlooper was sipping from a bottle of river water, purified with iodine, just as backpackers do to eliminate giardia from backcountry creeks.

"If that shows that Durango is open for business, I'm happy to help," explained Hickenlooper. A former geologist and brewpub entrepreneur, Hickenlooper had once nursed fracking fluid, to demonstrate its relative safety. He didn't use iodine in that case.

In Durango, Mayor Dean Brookie also made the case for the safety of water drawn from the Animas River for drinking and irrigation. "I can assure you that the water coming out of your tap has been more highly tested than any bottle of water on the shelves of City Market," he said at a public meeting.

EPA toxicologist Kristen Keteles tells the Durango Herald that it's all about dose. "I keep telling people... that the dose makes the poison," she said. "Even water can be toxic if you drink enough. And people are getting more arsenic if they drink apple juice or more mercury if they eat tuna than they'll get from the Animas River. We can't eliminate chemicals entirely."

As for dead fish in the Animas River. Yes, they've been seen and are being tested. But Joe Lewandowski, a spokesman for Colorado Parks and Wildlife, warned against making too much of them. "I don't want to underplay what's happened, but fish die, just like people die."

But downstream, on the Navajo Nation, tribal officials barred use of water for fears of contamination. This will mean a reduction in this year's yield of corn seeds and pollen. "The corn is our sacred plant," Franklin Miller, who is helping organize the tribe's response to the Gold King Mine spill, told the Herald.

CRESTED BUTTE, Colo. – The spilled drainage from the mine above Silverton has caused Crested Butte and Gunnison County to consider the vulnerability of their situation. There, contaminated water from the old Standard Mine is cleaned up before it enters Coal Creek, which flows through Crested Butte, providing drinking water as well as water for recreational purposes.

But what if the mining company that operates the treatment plant should go bankrupt?

With that in mind, town and county officials last week sent a joint letter to the Colorado Department of Public Health and Environment requesting assurances that the state would step in and ensure water treatment. They say that local governments would be unable to respond adequately to the release of untreated mine drainage.

Wolves out and about in Banff

BANFF, Alberta – Two wolves hunted and killed a deer in a Banff neighborhood recently in what the Rocky Mountain Outlook described as "harsh, yet beautiful display of Mother Nature."

Lu Carbyn, a wolf biology expert from the University of Alberta, told the newspaper that he believed that the killing was an act of opportunity, not one of desperation. Wildlife officers removed the carcass from a street and to a wooded area, where the wolves presumably finished their meal.