It's the most heavenly of weeks in the mountain towns of the Rocky Mountains. Nights are cool and soothing, the days sparkling.
Jul 25, 2012 9:00 PM By: Allen Best 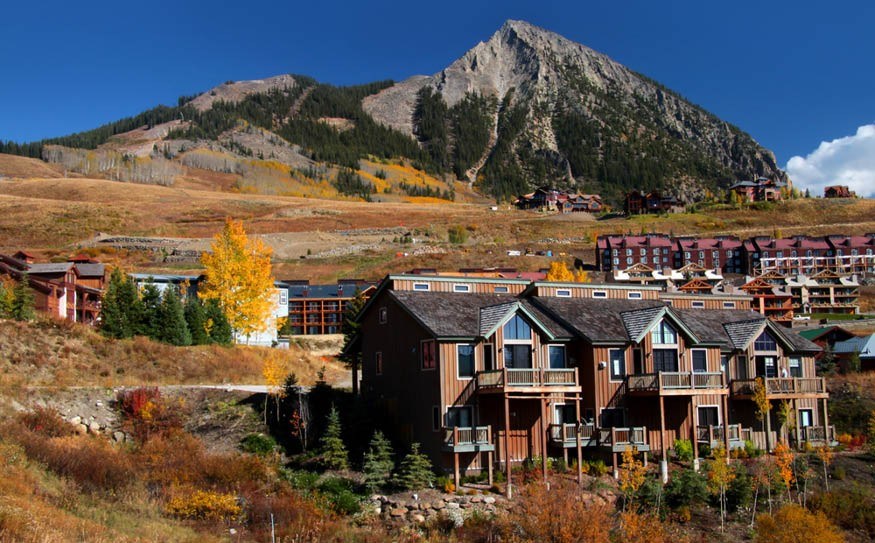 HEAVENLY HEIGHTS Crested Butte and other mountain towns are enjoying cool nights and warm days with wildflowers in bloom above 3,000 metres of elevation.

It's the most heavenly of weeks in the mountain towns of the Rocky Mountains. Nights are cool and soothing, the days sparkling. While the lowlands bake, the summer monsoons have arrived to ease the threat of wildfire and produce the blooms and blushes of wildflowers.

"Paradise Divide is living up to its name," reported Mark Reaman, of the Crested Butte News, referring to a wondrous area in the adjacent Elk Range. "There is indeed a bounty of wildflowers up high above 10,000 feet (3,000 metres)."

Musical and theatrical performances are equally compelling, and so are the venues for learned talk that have become more common in ski towns.

At Aspen, among the latest highbrow talkfests, is the Fortune Brainstorm Tech conference. It's sort of a more public version of Sun Valley's Allen & Co. mid-summer gathering of media moguls.

In his appearance at Brainstorm Tech, Dave Stern, commissioner of the National Basketball Association, explained how Twitter and other new media are boosting the popularity of professional basketball.

"Even this season, when we were locked out, even if they were tweeting that Stern is an idiot or a nincompoop, they were tweeting ... Social media has given an opportunity for our community to really stay occupied," said Stern, according to an Aspen Daily News account.

Also speaking was Google chairman Eric Schmidt, along with executives from Facebook, LinkedIn, Disney, Comcast and the Washington Post, among others.

Tina Brown, the editor who was the regenerative force of The New Yorker in the 1990s and is now the co-owner and lead editor of Newsweek and The Daily Beast, was also in Aspen, at a different venue, talking about the shifting media landscape.

Mitt Romney appeared in Aspen in recent weeks, being hosted in a fundraiser by Susan Crown — a member of the Crown family, owners of the Aspen Skiing Co. In what may be indicative of news far beyond Aspen, she was a firm supporter of Barack Obama in 2008 but was angered, according to an Aspen newspaper, by Obama's stance on Israel. This time, she's throwing her lot with Romney. She's got company. The Aspen Daily News reported the gathering produced $2.5 million for Romney's campaign in a place where 74 per cent of votes in 2008 went to Obama.

Romney was also in Jackson Hole, where he was the featured attraction at a $30,000-a-head dinner hosted by former Vice-President Dick Cheney. Sources told Jackson Hole News&Guide that donors were given a "remarkable level of access," including a 30-minute, unscripted question-and-answer session. He talked a lot about foreign policy.

For those of lesser means, Jackson Hole had plenty to offer. Country queen Emmylou Harris was to sing, a Greek comedy was being performed, and the artist Jeff Ham had an art show of his images of General George Armstrong Custer on display.

For those interested in the environment, an ecologist from Colorado was to discuss the effect of nitrogen deposition in lakes of the Tetons, and a Utah geophysicist was scheduled to talk about the "Shaky Tetons and Breathing Yellowstone."

KETCHUM, Idaho — The push is on in Sun Valley and adjacent towns to approve a one per cent sales tax to use as a kitty for securing direct flights from San Francisco and other distant cities. The tax, proposed for a five-year trial period, would generate an estimated $2 million a year.

Steamboat, Jackson, Telluride and Crested Butte all provide revenue guarantees to airlines. There is usually a partnership between the ski company and local taxing districts. In every case, at least some local public money is used. In the case of Vail, public money is used only for summer flights, while Vail Resorts alone posts winter revenues guarantees.

Sun Valley boosters, who say their resort has fallen behind others in the Rocky Mountains, want to create a sturdier financing platform. They say the $2 million in annual revenues generated by the proposed sales tax would allow them to arrange a daily direct flight from San Francisco beginning in 2013, and one or two other major markets in subsequent years. The San Francisco flight would yield an incremental 20,000 visitors per year, producing a $34 million stimulus to the local economy.

Ketchum Mayor Randy Hall says locals would pay only 20 per cent of the sales tax, reports the Idaho Mountain Express. Visitors, of course, would pay the rest.

The Ketchum-Sun Valley resort area currently has a minuscule flight program compared to the giant resorts of the West. Total enplanements last year at the airport in nearby Hailey totaled 53,000, with direct flights only from Seattle and Los Angeles.

The Sun Valley Co., operator of the ski area, was the sole financier. It would continue to post 50 per cent of flight revenues. Carol Waller, director of Fly Sun Valley Alliance, says the company has agreed to boost its financial stake.

The airline subsidy is being sold primarily as away to generate new tourism business. Currently, 77 per cent of airline passengers are either second-home owners or tourists. But the sales tax is also being pushed as a way to help sell more real estate and attract business people who need frequent and easier access to the outside world.

STEAMBOAT SPRINGS, Colo. — Last November, voters in Steamboat agreed to boost the sales tax by 0.25 per cent, delivering $400,000 for an expanded direct flight program. But next year, the number of seats will decrease 11 per cent. What gives?

Airline officials tell the Steamboat Today that the poor snowfall last winter resulted in fewer people flying to Steamboat, and hence greater losses. That in turn yields a perception of Steamboat as a riskier market for airlines, which want to limit their potential losses through increased flight revenue guarantees. Adding to the problem is the increasing cost of fuel.

Last year, Steamboat had revenue guarantees of $3.57 million. This coming winter they will edge above $4 million.

The Local Marketing District calculates it has $2 million available for flight revenue guarantees. That includes $1 million from a pre-existing two per cent lodging tax. Intrawest, operator of the local ski hill, has committed to contributing the first $1.1 million, and has indicated it could double that amount if necessary, reports the newspaper.

JACKSON, Wyo. — The flights options into Jackson Hole will increase this coming winter, with three new flights which will boost overall available seats by 10 per cent.

The local agency that arranges flights with airlines has three new non-stop flights from San Francisco, Minneapolis and Newark. Two of the three are being induced with revenue guarantees, reports the Jackson Hole News&Guide. With the additions, Jackson Hole now has flights from 10 cities, including Denver.

Public contributions accounted for less than 10 per cent of the total funds raised to post revenue guarantees, Mike Gireau, chairman of the Jackson Hole Air Improvement Resources, told the newspaper.

BANFF, Alberta — At least six black bears have been killed on roads in Canada's national parks so far this year, causing Parks Canada to urge drivers to slow down. An additional bear was killed on train tracks near Banff, although no grizzly bears have died in Banff, Kootenay or Yoho national parks.

The highway mortality for black bears is no higher than for last year. However, Parks Canada confirmed 477 deaths over a 20-year period in the seven national parks in the Canadian Rockies. Of them, 449 were the result of human interactions, the majority being hit by trains, cars or trucks.

In particular, biologists fear too many grizzlies are being killed after being drawn to scavenge for corn and other grain spilled from passing trains. In response to better understand bear movements in and around rails, 11 grizzlies have been fitted with GPS collars in Banff and Yoho national parks.