It was among the coolest years on record for the interior of the United States, but not so for California or the globe. Temperatures last year averaged 61.5 degrees Celcius in California — 4.
Jan 14, 2015 5:00 PM By: Allen Best 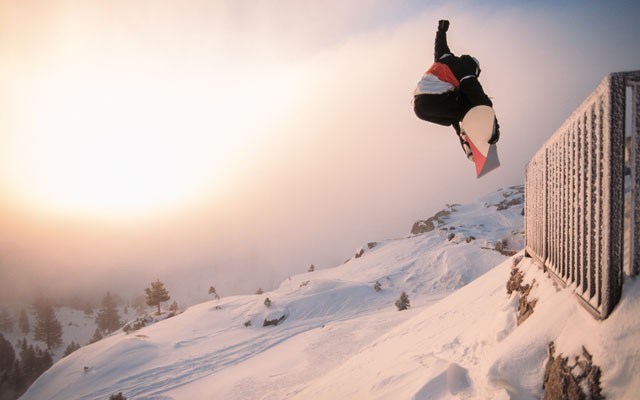 SUnny California Higher than average temperatures has caused some problems for ski resorts in California. A snowboarder gets air on a sunny day in Donner Pass, Cali. above. Shutterstock photo

It was among the coolest years on record for the interior of the United States, but not so for California or the globe.

Three other Western states — Alaska, Arizona and Nevada — also experienced their hottest years since 1895, when modern instrumentation became widespread. And Anchorage, Alaska, didn't have a single day in 2014 in which the temperature dropped below zero, the first time in 101 years of record keeping.

The National Oceanic and Atmospheric Administration is expected to release new reports this week showing that 2014 was the warmest year ever recorded for the globe as a whole. Last week, the Japan Meteorological Agency reached that conclusion.

There's widespread agreement among scientists that the burning of fossil fuels, putting carbon dioxide into the atmosphere, explains most of this rise in the greenhouse heat. Jim Hansen, one of the most vocal of scientists in this regard, was at Lake Tahoe recently to speak.

"If you add CO2 to the atmosphere, it's like putting a blanket on the planet," he explained.

The Lake Tahoe News reported that Hansen, former direct of the NASA Goddard Institute for Space Studies, argues that the only way to solve the problem is to levy an across-the-board fee on carbon. He predicts that 70 per cent of people would get a dividend back, in the form of reduced taxes, if a revenue-neutral carbon fee were levied.

In ski towns of Colorado, talk continues about how to advance local efforts. In Telluride, the town planning director, Michelle Haynes, produced a climate action plan. She triumphantly reported to the Telluride Town Council last week that the community is on track to reduce its greenhouse gas emissions 20 per cent by the end of 2015, five years ahead of a goal set in 2009.

This, it should be noted, is for the town government only and it relies heavily on purchase of renewable energy certifications, a controversial financial instrument.

In Aspen, town officials are calculating their next steps. The city's electricity utility is well on the way to being able to claim 100 per cent renewables by year's end. But city officials are also talking about creating resilience for increased heating.

A report by the Aspen Global Change Institute, a non-profit, finds that the temperature in Aspen has increased during all seasons since 1940, although precipitation and snowfall have increased.

More warming is inevitable, given the amount of heating locked into the atmosphere and oceans, and if emissions continue at current levels, Aspen's temperatures could rise by as much as 2.9 degrees in the next 24 years and 9.7 degrees by the end of the century.

How can a city of 6,000 people move the needle on an international problem? Ashley Perl, the director of the city's Canary Initiative, the city's climate change program, said that Aspen is closely watched. "I think we have more of an effect than we think we do," she said.

BOZEMAN, Mont. — Heard anybody calling for a Lucy, Bella or Sadie lately?

Those are the top three names of female dogs in Bozeman, reports the Daily Chronicle, which studied the list of dog licenses.

Max, Buddy and Jake are the most common names for male dogs.

Labradors top the list of breeds popular in Bozeman. There are 300 registered purebreds and another 80 described as some variant of "Lab mix." Border collies and Golden retrievers are second and third.

Not a very ice time for wapiti

ASPEN, Colo. — Two elk that fell through the ice on a small pond made it, but the third did not. Aspen firefighters did all they could, using axes, a saw, a rope and ladder in what the Aspen Daily News describes as a frantic effort to rescue the exhausted animals.

When they arrived, firefighters found the two cows swimming in circles, while the bull was by himself motionless in another part of the pond. The pond was estimated to be 2.5 to 3.7 metres deep.

A local wildlife biologist, Kevin Wright, told the newspaper that elk fall through ice in reservoirs and ponds from time to time. "These private ponds are notorious," he said.

He issued a citation to the homeowner for unlawfully feeding wildlife. Two piles of hay were near the pond. The homeowner said the hay had been left from bow-and-arrow target practice last summer. He said the water never freezes because he uses it as a geo-thermal source.