Mountain News: How to decide if you have too much grass?

DURANGO, Colo. — Just as some people start watering their lawns this spring, Steve Harris will rip his out. Harris is a water engineer in Durango and active in formulation of a statewide water plan for Colorado.
May 6, 2015 6:00 PM By: Allen Best 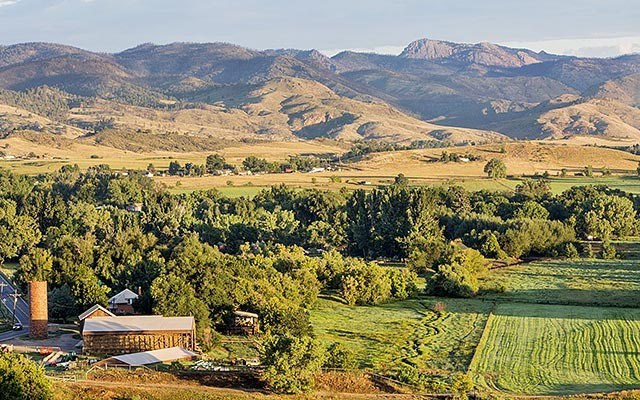 Drying up? With Colorado's population expected to double by the middle of the century, engineers and officials are working to develop a state-wide water plan that won't dry up farmland. shutterstock photo

DURANGO, Colo. — Just as some people start watering their lawns this spring, Steve Harris will rip his out.

Harris is a water engineer in Durango and active in formulation of a statewide water plan for Colorado. The core issue is how the state will accommodate a population that is expected to grow from today's 5.3 million to nine or 10 million at mid-century.

Nearly all of Colorado's water is owned by somebody, mostly farmers and ranchers. More than 80 per cent of water goes to agriculture. Cities are responsible for just eight per cent of the water.

Can cities grow without drying up farms? Many farmers are happy to sell, but that leaves agriculture-based communities eviscerated. Further exploiting rivers comes at the expense of fish and kayakers.

Similar to California and other water-strapped states of the West, Colorado has been talking about how to step up conservation. Whether in Denver or Durango, a typical home in Colorado will use 50 per cent of its water indoors over the course of a year and 50 per cent outside during the months of summer.

Can the use of water for outdoor landscaping be reduced? A water roundtable in southwestern Colorado in which Harris participates thinks so. It calls for taking steps to pivot indoor-outdoor water use to 60 per cent indoor use and 40 per cent outdoor. The thinking is that indoor water use will not go up. In fact, with wider adoption of WaterSense toilets and other fixtures, water use will decline. But even more drastic reductions should be accomplished in lawns and other outdoor landscapes.

Harris figures if he's going to talk this sort of talk, he needs to do the walk. At a statewide water meeting in metropolitan Denver last week, he announced that on May 15 he would have the 28 square metres of lawn at his house in Durango removed. He said he plans to replace it with flagstone.

One useful rule of thumb, he said, is "if the only time you walk on the grass is when you mow it, you probably have too much."

The last word on weed

BRECKENRIDGE, Colo. — Oh, those crafty cannapreneurs in Breckenridge. The Summit Daily News reports that Breckenridge Cannabis Club has moved from its Main Street location, as mandated by town voters in an election held last fall.

It is still in Breckenridge, at a new suburban location and with a new name (Backcountry Cannabis Club). It has also hung onto its Main Street location in what the Daily News describes as a giant billboard for the goods available elsewhere.

The store opened in 2010 to sell medical marijuana. At the time, it was among three marijuana retailers along Main Street in Breckenridge. Over time, others drifted to a service-oriented district called Airport Road (now dubbed "Airpot" road), three kilometres from the Victorian-themed Main Street that is central to Breckenridge's tourism brand.

As a medical dispensary, the company had revenues of $515,000 (U.S) a year, reports the Daily News. In its first year of selling "recreational" marijuana in 2014, the business had $3 million in revenues.

Colorado is the first state to legalize use by those 21 and over without medical need. A film production company spent over a year following Brian Rogers and Caitlin McGuire, the founders of the Breckenridge Cannabis Club. The forced exile from Main Street added drama to the story that has been broadcast by CNN, the cable news network, under the heading of High Profits.

The first installment of High Profits was broadcast on April 19, and it comes across as something like a reality-TV show, says the Daily News.

Since being ousted from Main Street, the renamed business has joined the other weed retailers on the outskirts of town in what locals dubbed the "green-light" district. As such, THC products are accessible to tourists who make a point of getting them, but not quite so much to those casually strolling Main Street in search of T-shirts, shots of Schnapps, or whatever else.

But the company — which now has a dispensary in Crested Butte and a grow operation planned at Steamboat Springs — still has a presence on Main Street.

The former location has now been reinvented into a cannabis "education center." It amounts to a high-profile billboard for the business. At this education centre, visitors can get directions to the new shop and a discount simply for dropping by the former dispensary.

The coal companies can pay royalties based on percentages of initial sales to subsidiaries at reduced rates.

"By eliminating subsidies and requiring coal companies to pay royalties on the true market price of coal, rather than on the hidden practice at which it is sold to a middleman or a subsidiary, the government will collect a fair return for U.S. taxpayers and Western states (an estimated $1 billion per year), and increase government transparent and efficacy," says a letter sent to U.S. officials, lawmakers, and the White House.

The Denver Post reports that the towns included Aspen, Buena Vista, Dillon, Leadville, Ophir, Ridgway, and Telluride, all in Colorado, plus Park City, Utah, and Taos, N.M. They have banded together under the name Mountain Pact. More towns are being solicited.

Stuart Sanderson, who heads the Colorado Mining Association, an organization heavily laden with coal-mining companies, rejected the allegation of a revenue loophole.

KETCHUM, Idaho — The Vietnam War ended 40 years ago last Thursday with the U.S. evacuation of the final soldiers, diplomats, and other personnel from Ho Chi Minh City, then called Saigon.

The United States had been deeply conflicted about the war, and it remains so today. Those conflicting views were evident in interviews of a trio of Vietnam War vets conducted by the Idaho Mountain Express.

All three men live in the Sun Valley to Hailey area, and all are in their early to mid-70s. Gary Busch, a real estate agent, told the newspaper that he was getting a masters degree in agriculture economics in 1967 when he was called in to his draft board in Bishop, Calif., on the eastern flanks of the Sierra Nevada.

"I was being groomed to become a farm and ranch manager," he said. Instead, he became an artillery officer, serving as a forward observer on search-and-destroy missions.

Winston Churchill said there is nothing quite so exhilarating as being shot at without effect. Busch has a different take. He said he still wakes up several times each year in a cold sweat, reliving the nightmares he experienced in battle.

One of his experiences was having one of his soldiers dying in his arms. "It was a sad experience," Busch said.

In turn, his job was to kill people on the other side. The U.S. Army succeeded greatly at that. "We stacked up bodies like cordwood," he said.

After Vietnam, Busch moved to Ketchum/Sun Valley in 1969 and has been there ever since.

"In retrospect, I have no feelings about the war one way or another. I went. I did my job, and in doing our job, the No. 1 thing was to keep those around us alive. We did our best by being efficient, and oftentimes it wasn't pretty."

Others from Ketchum are more skeptical about the value of their time in Vietnam. John McDonald, 73, the postmaster of Ketchum, was a crew chief on a helicopter that shuttled a commander to meetings. "I am not sure we had a good reason to be in Vietnam," he said.

Mickey Garcia, 73, was in Vietnam for two tours spaced apart by several years. The second was in 1969, during the Tet Offensive, a major assault by the North Vietnamese forces. "By that time, everyone was smoking marijuana. You didn't see that earlier. By that time, there were free-fire zones where you could shoot at anything that moved, including farmers and buffaloes in the fields, basically what you would call atrocities."

The United States, says Garcia, was in Vietnam for the wrong reason. North Vietnam was considered to be a pawn of China, itself controlled by Russia. If South Vietnam fell to communists, the dominoes would keep falling to... well, to the U.S. shores ultimately.

Some 2 to 3 million Vietnamese died in the conflict and 58,000 Americans. Even at the time, many protestors argued that nationalism, not communism, had inspired Ho Chi Minh and the Viet Cong to begin fighting against French colonial rule after War War II. The United States essentially entered after the French left.

"If we had known anything at all about Vietnamese history," said Garcia, "we would have known that the Vietnamese had been fighting with China for thousands of years. Ho Chi Minh was a nationalist, not a communist."

Concluded Garcia: "Once you realize that a deeply held political belief is akin to a religious belief, then you can see that most wars are religious wars."