Mountain News: It was the best of times, and the worst of times...

DENVER, Colo. – Snow is so good and deep in British Columbia that Whistler-Blackcomb has already announced an extended ski season, to May 28. In Colorado, two small ski areas — Cooper and Monarch — announced they are closing early.
Apr 4, 2012 9:00 PM By: Allen Best 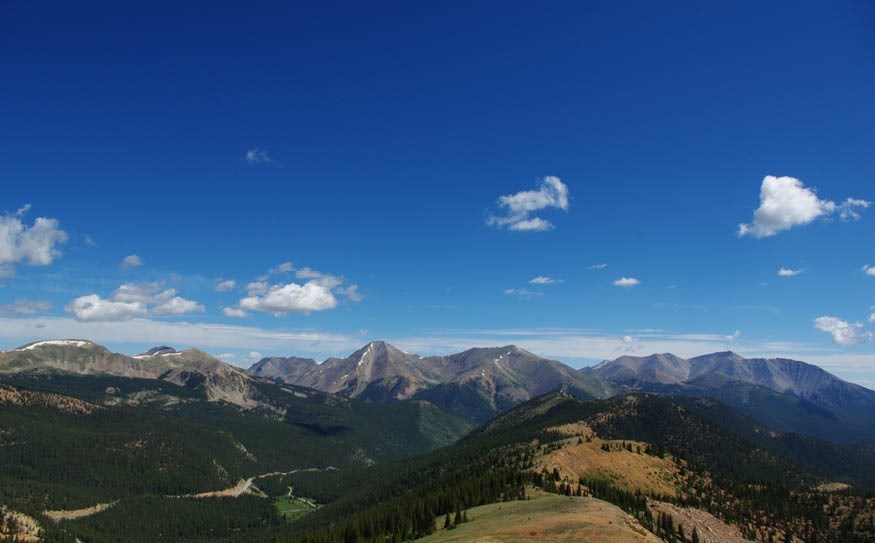 COLORADO SPRING While the abundant snow keeps skiers in Whistler enteretained, places like Monarch, CO are making the transition to summer.

DENVER, Colo. – Snow is so good and deep in British Columbia that Whistler-Blackcomb has already announced an extended ski season, to May 28.

In Colorado, two small ski areas — Cooper and Monarch — announced they are closing early. Others are sticking it out, but like a teenager with acne, trying desperately to cover their blemishes. Vail had huge swaths of dirt even high on the mountain, and crews were moving snow from forested area to cover the ski runs. Steamboat had closed 20 per cent of its trails. These are surely not alone.

In Idaho, the Big Wood River through Ketchum and Sun Valley was bulging with early and high runoff due to unseasonable warmth and heavy rains. The snow line was at 1,900 metres in elevation but expected to rise up to 2,500 metres with a surge of weekend heat, the Idaho Mountain Express reported.

A strange winter keeps getting stranger.

Fire is on many people's minds. West of Denver, embers from a prescribed fire were whipped by strong winds into tinder-dry forests, yielding a wildfire that killed two people.

Near Crested Butte, at the hamlet of Gothic, scientists reported one temperature that was 12 degrees Fahrenheit higher than ever recorded for that date, according to the Crested Butte News. Another record was also within sight: the least amount of precipitation ever in March.

It's feast or famine. Whistler-Blackcomb received 343 centimetres of snow during March alone; Crested Butte hasn't surpassed 508 centimetres for the winter.

Last year, an already healthy winter motored through April and then May. At Steamboat Springs, the Yampa River didn't see a peak runoff until July. This year, the peak seems to have already occurred, water officials tell the Steamboat Pilot & Today.

Of course, winter could conceivably return. Or this could be like 2002, the extraordinary drought year to which this one so far has strong parallels. That year, three huge fires erupted in Colorado during June.

Global warming to blame for weather?

NEW YORK, N.Y. — Weather is always erratic, of course. But March was weird enough that the New York Times wanted to know whether scientists thought global warming was to blame.

For some of it — yes, seems to be the answer. The Earth is clearly warming. February was the 324th consecutive month in which global temperatures exceeded their long-term average for a given month. This year, 17 high temperature records have been set for every new daily low.

Even in 2007, the International Panel on Climate Change was willing to report with 90 per cent confidence that the warming trend already well recorded around the world was due substantially to human activities, either greenhouse gas emissions or changed land uses.

But can extreme weather events be also pinned on global warming? That's more difficult. Climate scientists have typically said that trends will only become apparent in retrospect.

Dr. Marty Hoerling, of the National Center for Atmospheric Research in Boulder, Colo., while worried about global warming, suspects that this March madness will probably be explained by natural variability.

But others are exploring whether this heat — as well as other weather anomalies — can be linked to the rapid receding of Arctic sea ice.

ASPEN, Colo. — Aspen and Pitkin County continue to debate how to be most effective in steering the politics of climate change.

But in the sticky issue of the U.S. Chamber of Commerce, the commissioners are not yet ready to take a stand. The Aspen Skiing Co. has been pushing the local chamber to withdraw from the national group, because of the national group's resistance to policies that would harm the fossil fuel interests. The ski company alleges that the national group gets much of its money anonymously from oil and other groups that are covertly fighting climate-change policies.

Aspen Skiing Co. representatives argue that in quitting the national chamber, Aspen can draw national attention to the position of the U.S. Chamber in regards to climate change. The ski company has been lobbying members of the local chamber to see things in that light.

A minority of county commissioners agrees with the ski company, but the majority isn't ready to call on the local chamber to quit the national group.

JACKSON, Wyo. — Like many other mountain communities, Jackson Hole is looking to expand its appeal to the world's wealthiest residents.

With a $44,000 grant from new lodging proceeds, local chamber delegates plan to visit large international tradeshows in Berlin and London this fall. Also, airport officials are seeking to improve airline connections so that Jackson Hole is only "one stop away" from any airport in the world, according to Mike Gierau, president of the Jackson Hole Air Improvement Resource.

In 2011, according to the U.S. Commerce Department, the number of international visitors visiting the United States increased by 2.4 million.

In other news reported by the Jackson Hole News&Guide, Teton County was named one of only seven destinations in the world selected for the Sustainable Tourism Destination Early Adopters Program. If the county pays $30,000, it will be evaluated by United Nations-affiliated group for its efforts to conserve resources and reduce pollution.

With an increasing number of travellers selecting their destinations based on sustainable practices, being a part of this group could be a boon for the valley, says Tim O'Donoghue, executive director of the Jackson Hole Chamber of Commerce.

Unsaid, at least in the published version, is a risk: What if Jackson Hole aims to be designated a model for tourism sustainability, but the evaluation by the international organization reveals deep, green flaws? After all, while the valley has remarkable scenery, much of its built environment isn't much different than a suburb of Cleveland.

Meanwhile, Jackson has also directed some of its new lodging tax dollars in another direction entirely. The community allocated some hotel rooms and $70,000 in lodging-tax proceeds to help underwrite filing of a so-called reality television show called "Modern Family." Some in Jackson Hole question the expense. While the TV show may have an audience, it's unlikely to attract anyone with values aligned with those of people in the outdoors-environment-anchored Wyoming valley.

Ireland to visit China on behalf of jAsper

JASPER, Alberta. — Richard Ireland, mayor of the resort community of Jasper, is to visit China this month to help promote Jasper as a destination resort. The trip is costing Jasper $74,000, The Fitzhugh newspaper reports.

Beacon not enough to save San Juan skierOPHIR, Colo. — This winter's avalanche toll on Friday reached 30 in the United States when an avalanche, described by The Telluride Watch as massive, killed a skier in Paradise Basin, near Ophir Pass.

The 34-year-old victim was from Crested Butte. Although he was wearing a beacon, conditions were so treacherous that his three companions were unable to reach him for 45 minutes. Studies have shown that an avalanche victim has only a 30 per cent chance of survival when buried for 35 minutes or more.

In Telluride, speakers at a forum warned about getting too complacent about the dangers of avalanches, just because the snow is firming up into corn, reports the Tellruide Daily Planet.

"We've had fatalities in April before. Just because February is the biggest month for avalanches and it kind of tapers off, (the danger is) not to be ignored," said Ian Havlick, a guide for Helitrax, a helicopter skiing company. He and others noted many wet-slide avalanches.

Elsewhere in Colorado, a 27-year-old backcountry skier died on Buffalo Mountain, located near Frisco, after falling nearly 457 metres in a couloir and hitting rocks.

Who should pay for backcountry rescues?

BANFF, Alberta — Spirited words are being expressed in the pages of the Rocky Mountain Outlook in the wake of an expensive helicopter rescue of snowboarders who left the Sunshine ski area to find powder.

Their rescue, located in Banff National Park, involved a helicopter and snowmobiles, and also involved threat to the rescuers. Winds were high and the terrain was tricky. In the end, all turned out well.

Or did it? Alvin Shier, in a letter published in the newspaper, notes that helicopters used in a mountain rescue costs $2,000 per hour — and that's just the tip of the iceberg.

"There's no question those in trouble should be rescued, but should the costs be borne by the taxpayers of the land," he asks. "It's long overdue that those taking part in extreme sports carry insurance to pay all costs if they need to be rescued."

Josh Briggs, writing the next week, finds that misleading and also philosophically uncharitable. In fact, those who pay park user fees pay for rescues.

But he also wonders about casting stones. "Personally, I am unwilling to judge one person as foolhardy and another as a victim of bad luck — accidents happen to good people with good intentions."

He adds: "One of the characteristics of our society is our provision of care regardless of the ability to pay or judgment on the worth of victims."