LAKE LOUISE, Alberta — A decision that could produce what the Rocky Mountain Outlook describes as a massive expansion of the Lake Louise ski area has drawn fire from retired managers of Parks Canada.
Aug 12, 2015 6:00 PM By: Allen Best 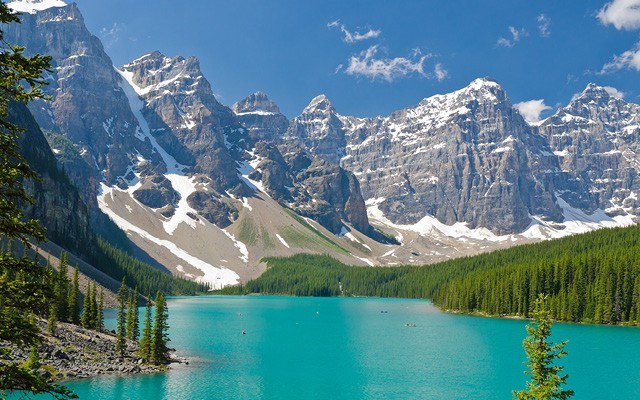 LAKE LOUISE, Alberta — A decision that could produce what the Rocky Mountain Outlook describes as a massive expansion of the Lake Louise ski area has drawn fire from retired managers of Parks Canada. The federal agency manages Banff National Park, where the ski area is located.

"Parks Canada will tell you they haven't approved anything, that these are guidelines," said Stephen Woodley, one of 11 former senior park managers who have registered opposition to the guidelines. "But this gives the ski hill at Lake Louise essentially carte blanche to proceed with a massive development in a world heritage site. It's simply outrageous."

He and other former park managers are asking the United Nations committee that designates world heritage sites to investigate threats to Banff National Park.

Wildlife advocates worry about impacts to habitat for grizzly bear, but also goats, probably wolverines, and other species.

The guidelines approved by Parks Canada allow an expansion of ski terrain, a new on-mountain cafeteria, and relocation of summer sightseeing operations. Potential capacity could grow to 11,500 skiers a day, nearly double the existing 6,000.

Dan Markham, the director of brand and communications for the ski area, told the Outlook that all the projects would take a couple of decades. "It's going to be about market demand," he said.

At Marmot, a ski area about two hours north of Lake Louise but within Jasper National Park, the federal government is also leaving the door open for expansion. Scientists worry that ski area expansion may work against preservation of the endangered caribou herds. Mark Hebblewhite, a caribou expert, said it's unethical to think about reintroducing caribou from elsewhere into both Banff and Jasper national parks while thinking about expanded commercial development.

Expansion in works for ski areas

The smaller of the two ski areas, Snow King Mountain Resort, is located within the town of Jackson. Officials in July announced they will begin seeking approval for a gondola, something the ski area now lacks, as well as a top-to-bottom zipline. An expanded boundary would allow Snow King to become two-thirds larger.

Max Chapman, president of Snow King, told the The Jackson Hole News&Guide that the goal is to create a ski hill that will draw the locals while holding its own against other resorts in the region.

In addition to Snow King, there's the larger Jackson Hole Mountain Resort about 16 kilometres away, and Grand Targhee, about an hour west. Both of the two ski areas are on the flanks of the Tetons.

Snow King says its zipline would be steepest in the United States, capable of reaching speeds up to 112km/hr.

After floundering for a number of years, losing money on skiing, new investors have poured $8 million into Snow King in an effort to create enough revenue streams to cover expenses. A new lift has been completed, a mountain coaster will be soon, and work had begun on a rope course.

The U.S. Forest Service must approve the gondola, which would also have a bottom terminal on property owned by the town of Jackson. Ski area representatives say they foresee the gondola as the greatest challenge. A restaurant or observatory would be located at the summit.

Meanwhile, plans to upgrade the infrastructure at Jackson Hole Mountain Resort continue. A new gondola is the most ambitious among 16 projects that resort owners want to do on Forest Service land. The suite of projects also includes a zip line and expansion of the mid-mountain Casper restaurant and installation of a "magic carpet" conveyor lift in the beginner area.www.mountaintownnews.net.