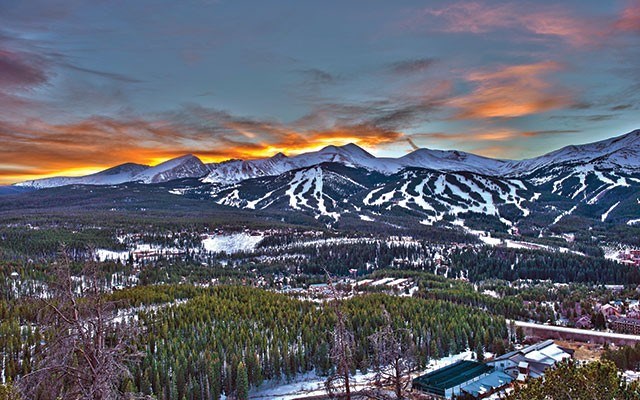 HOUSING CRISIS Officials in Breckenridge are looking at creative solutions to house more workers at the resort. www.shutterstock.com

It's one small piece of the big — and seemingly never-ending story — of housing in mountain resort towns. There's never quite enough to house all the people who want to live and work there.

In Breckenridge, town planners say that to convert some of these vacant offices into homes would require a tinkering with the town's parking requirements. And, not every office space has a rent that is affordable to the sort of housing that the town government feels it should help provide.

At a recent meeting covered by the Summit Daily News, Breckenridge Councilman Mike Dudick noted that the program being considered opens up a larger conversation about unexplored housing solutions.

A new program called Housing Works Initiative has been launched in Summit County, where Breckenridge is located, to do exactly that. It seeks to find new tools for putting residents into existing housing. But here's a different twist. While the general story has been conversion of long-term housing used by locals into short-term housing rented on Internet sites, this program seeks to do exactly opposite. The target for this is families with household incomes of between US$40,000 and $100,000. In other words, teachers, medical personnel, and small-business managers.

"The demand is so big we're really not going to build our way out of it," said Jennifer Kermode, the executive director. "So we need to find little tools in our tool chest that can help in smaller ways."

In California, a new study of the Truckee-Tahoe area takes a look at the housing balance. The 424-page study "confirms what we already knew," said Tony Lashbrook, town manager of Truckee. "There's a housing crisis in the region — much like it was before the recession, maybe worse."

Truckee is trying to develop its old downtown area, partly with lower-income residents in mind. One project, the 77-unit Truckee Artists Lift, would command rates of from $401 and $1,197 a month, depending upon income and size, from studio to three-bedroom.

"It's going to take a lot of effort to make a dent in the issue," Lashbrook told the Sierra Sun.

BAE Urban Economics suggests three courses of action as potential solutions: development of a Regional Workforce Housing Action Plan across all of Truckee and North Tahoe; formation of a Truckee North Tahoe Regional Housing Council, to be governed by a volunteer board; and for government agencies to consider better use of public land that could be leveraged to assist in workforce housing production.

Meanwhile, commercial activity that would increase the demand for affordable housing continues. A 118-room hotel in Tahoe City aims to be a four-star hotel. The Sierra Sun reports that the hotel, to be located on the north shore of Lake Tahoe, is partway through the permitting stage.

In Wyoming, town officials in Jackson got an earful about their plans to allow accessory dwelling units (ADU), also called mother-in-law units. The Jackson Hole News&Guide said that the residents worry the ADUs might destroy the neighbourhood character of areas zoned for single-family uses.

VALEMOUNT, B.C. — With Whistler as the shining example of a thriving mountain resort, British Columbia has signalled a great enthusiasm for new mountain resorts.

But is there enough business for them all? More specifically, even as Vail Resorts buys Whistler Blackcomb Holdings, can the province support a Vale?

That's one question in the wake of last week's news that the province has approved a master plan for a new resort in the Cariboo Mountains, just west of Valemount. This is an 80-minute drive west and across the Continental Divide from Jasper.

Plans for the next 20 years look impressive: 2,000 lodging units and a ski area that, at full development, will have a vertical drop of 2,050 metres. That would be the most in North America and third largest in the world, according to the developers.

Tommaso Oberti, the designer of Valemount Glacier Destination, stresses the access to glaciers at over 3,000 metres, which would make it unique in North America. He also brags about the virtues of the climate, calling it a "major snow dump zone."

Colorado-based Rick Kahl, editor of Ski Area Management, a trade publication, sees the remoteness of Valemount as a challenge. It's five hours from Edmonton, six hours to Calgary and eight hours to Vancouver. You really have to want to get there," he observed. On the other hand, the resort's effort to provide year-round offerings strengthens its plan, he says.

Construction of the resort is expected to begin next spring, with an opening late next year. The company projects 130,000 skiers in the inaugural 2017-2018 year. Investors in the CDN$175 million project are Hunter Milborne and Greg Marchant, both of Toronto.

Elsewhere in British Columbia, the Jumbo Glacier Resorts remains moribund. The $1 billion project got a permit from the provincial government in the last decade but did not undertake much physical construction in its allotted 10 years.

"Likely there were other factors in the decision to proceed slowly, not least the declared opposition of one of the two First Nations whose territory overlapped," the Vancouver Sun observed in a June 2015 story. The issue of a provincial permit is in the courts, the Sun reported in December.

But just how strong is the market for new ski areas? That's among the questions posed by the proposed Garibaldi project between Whistler and Vancouver. An old idea reinvented, Garibaldi is opposed by Whistler, which argues that the ski area has marginal snow conditions. But one of the more damning statements has come from Paul Mathews, a ski area designer who is headquartered at Whistler.

In a February 2016 story in the Vancouver Sun, Mathews observed that the skier market in British Columbia — as in the United States — is essentially flat. He pointed to the expansion of a little town ski hill at Revelstoke into a major resort.

While Revelstoke has finally achieved 170,000 skiers per year, visitation to the area's other 10 ski hills — including Sun Peaks, Big White, and Kicking Horse — has declined by the same proportion.

"In B.C. new resorts are parasitic," he said. "We seem to have hit our ceiling."

Whether new Chinese skiers will raise the ceiling in British Columbia after the 2022 Winter Olympics is anybody's guess.