JACKSON, Wyo. — From downtown Jackson, it's impossible to see the Milky Way Galaxy. For that, says Samuel Singer, the founder of an organization called Wyoming Stargazing, you need to get out of town.
Feb 25, 2015 5:00 PM By: Allen Best 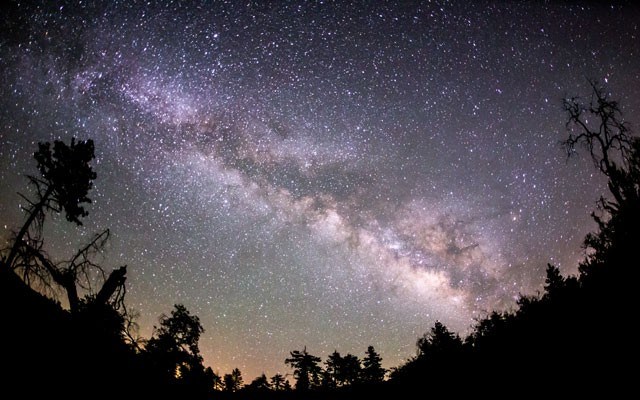 A stargazing group in Jackson, Wyo. is concerned that the Milky Way Galaxy is not visible from the town centre. Photo by Kevin Key / Shutterstock

JACKSON, Wyo. — From downtown Jackson, it's impossible to see the Milky Way Galaxy. For that, says Samuel Singer, the founder of an organization called Wyoming Stargazing, you need to get out of town.

Jackson, a city of 10,000 people, is the only town in Teton County. The county is almost entirely composed of public lands, including Grand Teton National Park. Just three per cent of land is privately owned.

Singer's organization has conducted a test of light pollution, which is measured on the Bortle scale. By that measure, one is as dark as it gets under starry skies.

Jackson's town square of elk antlers measures five on this scale, or akin to a suburban area. It's also comparable to Flagstaff, Ariz., a city of about 60,000, says Singer.

But even Grand Teton National Park only measures at three, a typical rural sky but not truly dark. Singer notes that in parts of Grand Teton, you can find those truly dark skies, but not in areas near Park Service facilities.

Organizations have missions, and Singer's group aims to darken the night sky in both areas by reducing the glare from lights. Lights always have impact, but glare can be reduced if the bulb or other source is shielded, so it lights only the ground.

Bears out, but it's no big deal

BANFF, Alberta — Warm weather has drawn several bears from their dens around Banff and Canmore. But John Paczkowski, a biologist with Alberta Parks, says such mid-winter bear activity is nothing concerning.

"It happens in Yellowstone all the time. Wolves will kill an animal, and the bears will emerge to sniff the carcass. We've seen bears get up for a couple of hours, and it usually corresponds with warm weather," Paczkowski said.

What has concerned him is the lack of snow. Snow adds a layer of insulation over bear dens, likening the difference to that between a light blanket and a down blanket. He told the Rocky Mountain Outlook that he expects the grizzly bears to return to their dens and remain there until late April.

BANFF, Alberta — Grizzly bears prefer to use broad overpasses to cross the Trans-Canada Highway in Banff National Park instead of narrow overpasses or ducking into underpasses.

That's the conclusion after 16 years of research by Canmore-based wildlife biologist Tony Clevenger.

He said male grizzlies will use all types of structures, but females clearly prefer larger structures. "It's a lot related to safety and security."

Banff National Park has six overpasses and 38 underpasses, the most of any single stretch of highway in the world. Deer made up 48 per cent of all animal crossings during the 1996-2014 study, followed by elk at 35 per cent.

Clevenger tells the Rocky Mountain Outlook that grizzly bears were wary at first, and it took them five years to begin using the crossing structures.

BEND, Ore. — If you're a cougar in Oregon, it's one strike and you're out. That policy of state wildlife officials was demonstrated recently when a 48-kilogram male cougar was found lounging in a tree within the city of 82,000 people.

Wildlife biologists shot the cougar with a tranquilizer, lowered it to the ground, and then took it elsewhere, where it was administered a lethal dose of poison, reports the Bend Bulletin.

"We just don't relocate cougars (found) in town," explained Michelle Dennehy, spokeswoman for the Oregon Department of Fish and Wildlife. She said the animal being close to people during the day was evidence that something was wrong. Moving it elsewhere would simply move the problem elsewhere.

Tim Dunbar, executive director of the Mountain Lion Foundation, questioned the policy. In California and Washington, he said, the cougar would have been relocated and released.

Bill would lower the 'Zion Curtain'

PARK CITY, Utah — OK, a guy goes into a bar in Park City and orders a gin and tonic. What does he see?

Nothing, and many in Utah think that's a joke. The state requires something nicknamed the Zion Curtain, a shield to prevent people — including youngsters — from seeing alcoholic drinks mixed.

The Park Record says a legislative bill has been introduced by the state representative who represents Park City, which would allow restaurants to create a separate bar or lounge area for mixing drinks where children wouldn't be allowed.

"Not seeing the alcohol doesn't mean it isn't going to be served or consumed," explained State Rep. Kraig Powell.

The current law was influenced by the Church of Latter-day Saints (LDS), i.e. the Mormons. The LDS believes that alcohol policy in Utah is "closely tied to the moral climate of the state, and legislation should not enable, promote or contribute to an 'alcohol culture.'"

Lance Armstrong back in the news

ASPEN, Colo. — Lance Armstrong was back in the news, and not in a good way. In late December, he was driving in Aspen and hit another car, then sped off. The car, a GMC Yukon, was traced to Armstrong.

Armstrong's girlfriend, Anna Hansen, tried to take the rap, but a police detective contacted a valet at a local hotel, where the couple had parked the night before. The valet said that no, he had helped Hansen into the passenger's seat and Armstrong got behind the steering wheel and drove away, according to an account in the Aspen Daily News.

Hansen said that she tried to take responsibility to avoid Armstrong's name being in the newspapers. Nice try.

Snow, the star of film, a no show

DURANGO, Colo. — Snow was to be the quiet star — or villain — of the newest Quentin Tarantino effort, which is being filmed near Telluride. But through January, it was mostly a no-show.

Tarantino has been camped out in Telluride to film The Hateful Eight, the story of post-civil war bounty hunters who get caught up in a snowstorm and then in betrayal and other problems.

But there were just a scant eight inches of snow during January, reports the Durango Herald, forcing Tarantino to shoot only indoor scenes.

The film had been scheduled for 49 days of filming beginning in late December at a cost of $25 million, according to the Denver Business Journal.

JACKSON, Wyo. — The path has been cleared for an alpine coaster at Snow King Resort, the ski area located about six blocks from downtown Jackson. The larger Jackson Hole Mountain Resort is located about 16 kilometres away.

The town council had earlier voted to treat the proposal as a minor development plan, delegating the decision to town planning director Tyler Sinclair. The company that makes the ride said it will generate less than 65 decibels of noise, the equivalent of a regular conversation at a distance of about one metre from the speaker.

The Jackson Hole News&Guide says the 11.5-metre-tall coaster could be constructed as soon as this summer and will make four 360-degree loops in a cluster of trees on the side of the mountain.

Also planned at Snow King, although not yet approved, is a ropes course, zipline, a longer lift, and, perhaps, significant base area development. New owners hope the alpine coaster will deliver revenues that offset what have been historically significant losses in winter operations.

Vail now operates two of the ski areas at Park City, The Canyons and Park City Mountain Resorts. Unlimited skiing is offered at the two ski areas along with skiing at other Vail Resorts properties in Colorado and California.

"You're going to get people coming from different parts of the world to ski here," said Nancy Tallman, president of the Park City Board of Realtors. "People who have been going to Colorado are going to use this pass to check out Park City."

Steve Roney, chief executive of Berkshire Hathaway HomeServices Utah Properties, agreed. "While we have yet to see a large number of international buyers in Park City, I think it likely we will see more in upcoming years," he told The Park Record.

Local boosters point out that Park City has unparalleled access, with Salt Lake City International Airport just 40 minutes away, but with lower prices than other resorts.