Mountain News: Oh, the delights of getting over 60

ASPEN, Colo. — At least 23 per cent of permanent residents of Aspen and Pitkin County are 60 and older, which makes it distinctly gray — and an obvious place to study geriatric medicine. The Aspen Times reports that a $1.
Feb 6, 2013 8:00 PM By: Allen Best 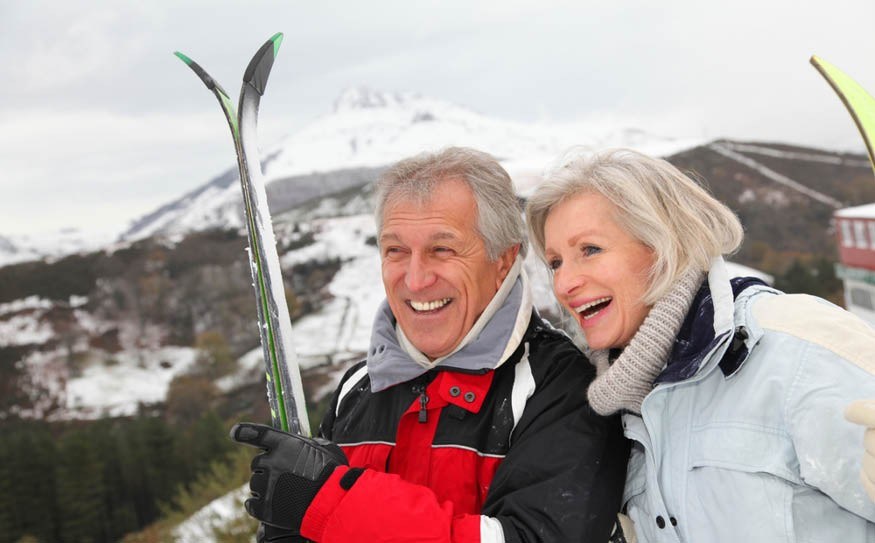 ASPEN, Colo. — At least 23 per cent of permanent residents of Aspen and Pitkin County are 60 and older, which makes it distinctly gray — and an obvious place to study geriatric medicine.

The Aspen Times reports that a $1.5 million endowment has been given to help launch programs aimed at serving senior citizens in Aspen and the Roaring Fork Valley.

A symposium was held with talks labelled "Cognitive Impairment: Facts and Fiction," and "Depression: What to Look For."

Sounds like fun, doesn't it? But sponsors promised more entertaining talks than the labels suggested.

Staying the X course despite an X Games death

ASPEN, Colo. — With the death of snowmobile stunt competitor Caleb Moore, the focus has intensified on the X Games. This is the first fatality in the 18 years of the event, the last 12 of them in Aspen, but the obvious question is whether there is too much X in the X Games.

The Aspen Daily News polled public officials and sponsors, including the Aspen Skiing Co., but found little overt support for taming the competition.

"When the world's best compete at the highest level in any sport, risks remain," said Katie Moses-Swope, a spokeswoman for ESPN, which produces the annual event.

Michael Kaplan, chief executive of Aspen Skiing Co., also noted inherent risks. "The X Games participants are elite athletes who are aware of the risks and undergo rigorous training and preparation to mitigate those risks, but they cannot be totally eliminated," he said in a prepared statement.

And Adam Frisch, a city councilman in Aspen, which also provided funding for the X Games, says he has seen no evidence of incompetence. "It seems what they do is crazy, but I'm unsure, statistically, if it's worse than anything else that goes on in other sports," he said. "This is just a sad day for the sport of snowmobiling, the community and the X Games."

But Michael Owsley, a commissioner in Pitkin County, which helps put on the event through sponsorship of transportation, said X Games and the ESPN officials should "seriously examine whether or not they can have an X Games without putting people at risk."

A representative of the local chamber estimated the cost of hosting the event at five to 10 million dollars, if split among the three local ski mountains, plus thousands of free hotel rooms for athletes, staffers and sponsors during the event and the preparations.

The event is currently held in Aspen in late January, but that date is off-limits to Park City because the resort already has its busiest event of the year then: the Sundance Film Festival. "April was identified as the alternative, but that would have required preparations be diverted during March, also an extremely busy time. And what benefits would accrue during April, a time when many people have shifted their interests away from snow and to other sports."

In the end, representatives of the chamber, the three ski mountains, the town government and the lodging industry all agreed that the prize wasn't worth chasing. That leaves Aspen still bidding to continue as the North American host for the Winter X Games when its current contract expires after the 2014 event, along with Lake Tahoe, Quebec City and Le Massif de Charlevoix in Canada.

Snowbird is high above yucky air

SALT LAKE CITY, Utah — In late January, the Salt Lake Tribune reported that "eye-smarting, lung-scarring smog" has enveloped the Salt Lake Valley for a large part of the winter.

Now, it reports that Snowbird is offering discounted lift tickets on bad-air days.

"Although you can't see it from the valley, the skies are blue and the sun is shining at Snowbird during most inversions," said Dave Fields, Snowbird vice president of resort operations, in announcing the $20 discount off the normal $84 all-day ticket.

In January, a group called Utah Physicians for a Healthy Environment released a letter signed by more than 100 doctors. They called for large pollution sources, such as the Kennecott smelter, to be shut down on days when temperature inversions trap smog in the valley. They also want fares for public transportation to be waived on those days and highway speeds reduced to 55 mph.

WHITEFISH, Mont. — Jim Nabors, the actor who played Gomer Pyle in the '60s sit-com "The Andy Griffith Show," has married his long-time companion. He met his partner, a firefighter in Honolulu, in 1974, and they have been together now for 38 years. Nabors split his time between Whitefish and Honolulu for many years, but now lives in Hawaii exclusively. They got married in Seattle, however, as Washington State recently legalized gay marriage.

"Any restrictions will only serve to reduce choice, decrease competition, the quality of service and the value," said Justin Burwash, representing Banff Caribou Properties. "The combination will reduce the number of visitors and amount of money they spend while they're here."

Also voicing opposition was Tommy Soukas, who has run Tommy's Neighbourhood Pub for 27 years. Leave it alone, he said, and said that while he is an independent, locally owned business, he has competed with both locals and franchises.

The star witness for those who support limits was Howard J. Kozloff, who manages a real estate investment, development and advisory company in New York.

"Starbucks and Earls do not make a place," he said. "Chain stores erode character, which can erode visitor numbers. If tourism is your greatest asset, why turn yourself into a generic destination?"

Another business owner, Susanne Gillies-Smith, also supported limits. "We're not in a free market. We're in a national park," she said. "We need to protect the integrity of our town and our small businesses."

CANMORE, Alberta — The "bitumen bubble" that provided Alberta with its booming economy and low taxes is leaking air. Because the bitumen is more expensive to process, experts tell the Rocky Mountain Outlook, it fares poorly against higher quality oil, including that which is being produced in North Dakota's Bakken shale.

"We enjoy the lowest taxes in Canada because of oil," said Ron Casey, an elected legislative representative. "There's still a huge advantage here, but we're going to have to reassess and re-evaluate and look at how we do business."

Efforts to expand export of bitumen through new pipelines, including Enbridge's Northgate pipelines to British Columbia and the Keystone XL across the United States, have been slowed by concerns about environmental impacts.

"The real worry for Alberta is that by all estimations this is looking to be more permanent," said Todd Hirsch, a senior economist with ATB Financial.

He told the Outlook that even if the pipelines were a sure bet, they will take years to get built and operating.

Resorting to transportation of oil by rail would be potentially more dangerous. "If the environmentalists block Keystone and northern Gateway, it might be what they call a pyrrhic victory because if more of this is going to be going by rail, then you're going to see a lot more avalanches, train derailments and tanker spilling," he said.

"It's way more prone to accidents than pipelines."

PARK CITY, Utah — Three mountain lions were captured and killed after pets were attacked in Park City. One of the pets was found dead and the other injured. Wildlife authorities tell The Park Record that mountain lions frequent areas where deer spend winter months, and pets sometimes are also attacked.

SNOWMASS VILLAGE, Colo. — What was once a movie theater, then a ballroom and conference center, now will likely soon become a bowling alley, the first in the Snowmass-Aspen area.

Mark Reece tells the Aspen Daily News that he plans a boutique operation: maybe eight lanes, gourmet food and comfy couches. None of those cheap plastic chairs at this joint.

SOUTH LAKE TAHOE, Calif. — South Lake Tahoe almost certainly will not join the 55 cities and five counties in California that have restricted the distribution of plastic shopping bags, reports the Tahoe Daily News.

The three elected officials at a recent municipal meeting all shared concerns about the effect of a ban, including the worry that reusable bags are hard to clean and can spread food-borne illnesses.

However, a recent poll in nearby Truckee shows strong public support for a ban, says the Sierra Sun.

Another ski area, or a hoax?

TELLURIDE, Colo. – Heartburn has returned to Telluride, this time courtesy of a familiar figure in backcountry land issues.

Tom Chapman, an attorney, has made a career out of buying old mining parcels deep within wilderness areas or other public tracts in Colorado and then threatening to develop them. A few times, he has engineered the cheap land parcels into substantial land exchanges, in one case in the 1990s leveraging land — and a bluff — in the West Elk Wilderness near Paonia into attractive developable land near Telluride.

In 2010, Chapman bought three old mining claims in the Bear Creek drainage, which is adjacent to the Telluride ski area, and long a favorite haunt of Telluride's elite skiers.

Now, Chapman has applied to the U.S. Forest Service for a permit to create a new ski area. The plan calls for 1,300 acres of hike-to and perhaps helicopter skiing in one of the highest bowls in the Rocky Mountains. The highest elevation would be 4,132 metres (13,555 feet) and the lowest 3,524 metres (11,562 feet) at the mining claims. He promises to control it for avalanches.

As before, he claims that his strategy is to protect his private property interest. But his history is one of trying to leverage real money from the relatively inexpensive purchase of the mining claims. Sometimes it has worked, and in other cases, such as near Crested Butte and Beaver Creek, not so well.

MARBLE, Colo. – It's always a crapshoot if you get into an avalanche. The random ways of the snowy torrents were revealed in two cases, one in Colorado and one in Montana in recent weeks.

In Colorado, four skiers were descending a chute near Marble, southwest of Aspen, and one of the four got knocked down in a relatively small slide that carried him 76 metres (250 feet) and left him under three feet of snow.

All of his companions were equipped with beacons and other gear, allowing the survivors to reach his body within 10 to 15 minutes. But already, there was no pulse, according to a report of the Colorado Avalanche Information Center. The victim was 37 and, according to the Summit Daily News, a highly regarded employee in the Summit County government.

In Montana, a skier survived an avalanche in Glacier National Park, but was badly beaten up. His helmet was smashed to pieces, he suffered a broken arm, six broken ribs and also had head injuries, reports the Whitefish Pilot. He was also buried up to his neck, but his companion was able to dig him out and they both lived to tell the story.