SALT LAKE CITY, Utah — The Wasatch Range of Utah is phenomenal in many respects, including the number of ski areas located along the spine of the narrow range, all within a few kilometres of each other.
Mar 26, 2014 9:00 PM By: Allen Best 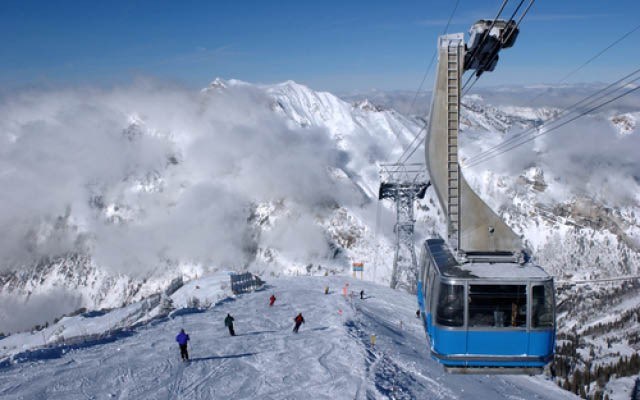 REAL RANGE Resort operators along the Wasatch range have a vision to connect seven resorts along the range by installing a few strategically placed lifts on private land at a cost of $30 million. The resorts include Park City Mountain Resort, Deer Valley, Canyon Resorts, Alta, Brighton, Snowbird and Solitude. File Photo

SALT LAKE CITY, Utah — The Wasatch Range of Utah is phenomenal in many respects, including the number of ski areas located along the spine of the narrow range, all within a few kilometres of each other.

Last week, the general managers of the seven ski areas gathered in one room to share a common vision of being connected via lifts, with one pass good for all.

The vision is not particularly new. It has been, noted the Salt Lake Tribune, talked about for 50 years, or about as long as some of the ski areas have existed.

What was remarkable was that the ski areas have united around one vision.

"You couldn't get resort operators to talk to each other at a cocktail party in the (old) days, let alone agree on a master concept," Mike Korologos, a Utah ski historian, told The Tribune.

The vision is called OneWasatch, and it would allow skiers to access more than 18,000 acres of terrain, three times the size of Vail Mountain and twice as much as at Whistler Blackcomb.

The operators say that just a few new lifts, strategically located on private land between the ski areas, could knit them together, providing customers access to a total of 100 ski lifts. Cost is estimated at $30 million.

Included are Park City Mountain Resort, Deer Valley, and Canyons Resort, all based on the east side of the range, with Alta, Brighton, Snowbird, and Solitude, all on the west.

Utah's resorts already enjoy unparalleled air access. From Park City, it's 30 minutes, 45 at most to the airport in Salt Lake City.

This new plan, if implemented, would give the Utah resorts something else unrivaled in North America, the interconnections found in resorts of the Alps.

"You combine that with our accessibility and the airport, and there's not a ski community in this country that can beat us," said Jenni Smith, general manager of Park City Mountain Resort.

But will it happen? The Salt Lake Tribune, in an editorial, was not exactly gushing. "With much fanfare this week, the seven ski resorts...joined together in a historic moment to announce ... a logo."

Grassroots environmental groups also weren't gushing. "It's a concept we're definitely not excited about, whatsoever," said Carl Fisher, who directs Save Our Canyons. Jamie Kent, board president of the Wasatch Backcountry Alliance, also expressed skepticism of the presumed economic benefits of the interconnections.

"Since the (1999) merger of Whistler and Blackcomb ski resorts in British Columbia to create Canada's largest ski complex, skier/rider visits to the area have remained stagnant," he wrote in an op-ed published in The Park Record. "It appears that combining the resorts into one complex has not created any additional economic or social benefit to the resorts or to surrounding businesses and communities."

Silent in last week's press coverage was the Salt Lake City government. The city gets its water from creeks coming off the Wasatch Range, and when a more limited ski area interconnect was talked about over the last several years, water officials expressed reservations, citing potential impacts to the watersheds.

But Mike Goar, general manager of Canyons Resort, said having all seven ski areas agree on revenue sharing and the three crucial connection points was a major accomplishment.

"The idea was finally baked enough," he told The Park Record.

TELLURIDE, Colo. — The U.S. Forest Service has reopened two of four gates between the Telluride ski area and a popular sidecountry valley called Bear Creek. The gates had been closed since 2010.

Bear Creek is located adjacent to the ski area, flushing out in the town of Telluride, not far from the park where the big bluegrass festival is held every June. It offers wonderful skiing, but also great dangers.

Then came Tom Chapman. He's an attorney in Colorado who has, for more than 20 years, bought private land within the broader fabric of federal lands, what is called an inholding, or worked with others who have such holdings. Then he threatens to develop the backcountry parcels.

This seems to be a stratagem. In the early 1990s, after many threats, Chapman started building a home in the West Elk Wilderness, west of Aspen and near Crested Butte. Construction materials had to be helicoptered into the site, and at some point the Forest Service capitulated, agreeing to give Chapman land near Telluride in exchange for his wilderness inholding.

Mike Rozycki, planning director for San Miguel County, says two or three homes have been built on the private property near Telluride formerly administered by the Forest Service.

In the late 1990s, Chapman tried again. This time, he unveiled a number of inholdings in wilderness areas in Colorado, including a former mining site at timberline, located in the heart of the Holy Cross Wilderness Area, south of the Beaver Creek ski area. Buyers of the rarified real estate could helicopter to their homes.

But nothing came of that.

The Telluride case has been an ongoing drama and again involves inholdings, this time in Bear Creek. Chapman accused the Forest Service of not taking efforts to prevent trespassers from crossing the property.

That provoked the Forest Service to close access from the ski area once again. In deciding to re-open the gates, Forest Service officials said that people were ducking the ropes at will.

"We've had (four) skiing seasons to observe it, and we don't think skier behavior has really changed," Judy Schutza, the local district ranger for the Forest Service, told The Telluride Watch. "So we might as well have an access point where we can convey some information to skiers."

Bill Masters, the long-time sheriff of San Miguel County, is no more pleased than he ever was about the situation. He would love to have more authority other than to dispatch search and rescue crews to aid skiers and riders who get stranded on cliffs or who have been caught in avalanches.

"I've got responsibility to manage what I consider to be a ski area because we have up to 300 people a day skiing there," he told the Daily Planet. "I don't get any revenue from it and I don't have the authority to manage it or designate routes, the easiest or safe way way down."

Because Bear Creek is outside the ski area, it is not managed for avalanche safety or patrolled.

Uphillers at Whitefish cause vexing problem

WHITEFISH, Mont. — With the increase in people using groomed ski trails for uphilling, Whitefish Mountain Resort and the U.S. Forest Service instituted a new policy, to restrict use of times and places.

But the restrictions aren't being honoured, and in February two skiers hiking up Big Mountain before the lifts opened were in Helloroaring Basin when ski patrollers were about to deploy explosives to control avalanches.

That and other incidents have prompted the resort to consider changing the uphill ski policy, reports the Whitefish Pilot.

TAMARACK, Idaho — Credit Suisse, the major creditor for Tamarack, the new resort in Idaho that went belly-up with the recession, has applied a total of $80 million in credit to gain control of three properties in a series of sheriff's auctions.

The Idaho Statesmen reports that Credit Suisse gained control of the ski area, a chunk of platted but undeveloped land, plus a lease agreement with the state of Idaho.

The bank had already gained control of 15 homes in a previous auction.

Still up for grabs is the undeveloped shopping and residential plaza.

Intrawest on its feet and looking to develop

STEAMBOAT SPRINGS, Colo. — Intrawest is on the move. The company, owner of Steamboat ski area and operator of Winter Park, got out of a horrendous debt by spinning off several properties. Now, as the result of a public offering called an IPO earlier this year, it has $29 million.

At a recent call with investors and reporters, chief executive Bill Jensen said the IPO and the restructuring have placed the company in a better position for acquisitions. He said the company's focus on deals in the Northeast U.S. hasn't changed, according to Steamboat Today, which sat in on the call.

Gary Ferrera, chief financial officer for Intrawest, said the company would like to get some real estate deals gong on its 1,150 acres of base area land across its resorts in the next year or two.

CODY, Wyo. — Animals are out and about in many places. In Yellowstone National Park and adjoining areas, the first black bear of the year was observed Feb. 11 and the first grizzly was noted on March 4, according to the Wyoming Game & Fish in mid-March. Don't they know that it's still cold and snowy?

As for wolves, they make cows very, very nervous. Researchers from Oregon State University note that wolves have spread into ranching areas of the West after being reintroductions into Yellowstone National Park.

"Wolf attacks also create bad memories in the herd and cause a stress response known to result in decreased pregnancy rates, lighter calves and a greater likelihood of getting sick," says Reinaldo Cooke, an animal scientist in OSU's College of Agricultural Sciences.

To test whether the anecdotal reports of ranchers were accurate, the researchers simulated a wolf encounter with 100 cows. Half of them had never seen a wolf, and the other half had been part of a herd that was previously attacked on the range.

Cows were gathered in a pen scented with wolf urine while pre-recorded wolf howls played over a stereo. Three trained dogs — German shepherds closely resembling wolves — walked outside the pen.

Researchers found that cortisol, a stress hormone, increased by 30 per cent in cows that had previously been exposed to wolves. They bunched up in a corner, formed a protective circle and acted agitated. Their body temperatures also increased rapidly, another indicator of stress.

Yet the cows previously unfamiliar with wolves were curious about the dogs and did not show signs of stress.

The university researchers estimated that wolves in northeastern Oregon could cost ranchers up to $261 per head of cattle, including $55 for weight loss and $67 for lower pregnancy rates.

Pigs are in the news in British Columbia. Licensed hunters have the green light to shoot feral pigs anywhere in the province. They have escaped farms and established in the wild in parts of the Lower Mainland, Kamloops, the Okanagan, Peace River and Kootenay regions.