ASPEN, Colo. — Prostate and breast cancer are the most common types of cancer in both Aspen and Colorado, but Aspen has a higher incidence of skin cancer than does Colorado, which has the nation's highest mean average elevation, overall.
Mar 13, 2013 9:00 PM By: Allen Best 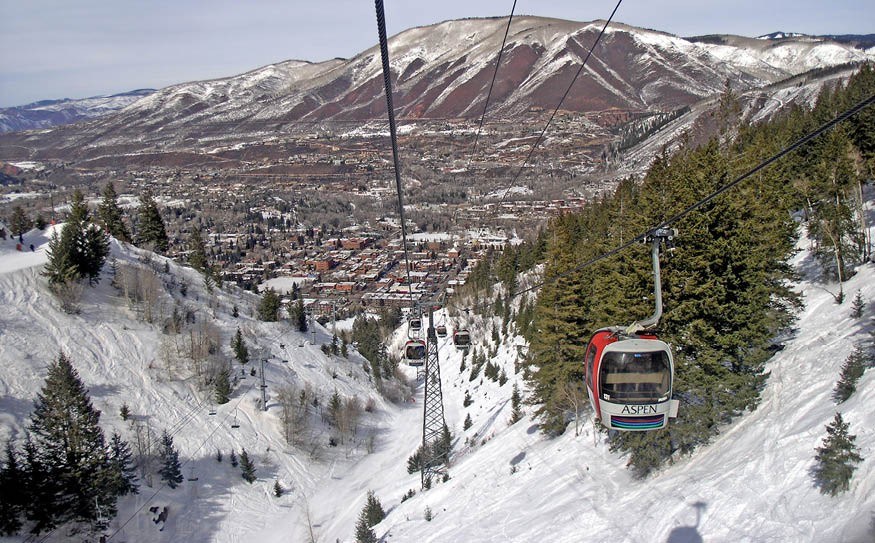 ASPEN, Colo. — Prostate and breast cancer are the most common types of cancer in both Aspen and Colorado, but Aspen has a higher incidence of skin cancer than does Colorado, which has the nation's highest mean average elevation, overall.

"You can attribute that to folks being outside all the time, doing all the activities and things that they do here," said Jordana Sadella, of Community Health Services, a nonprofit group.

Reviewing health statistics, the group found more common use of alcohol among locals, as 73 per cent of adults reported having had at least one drink of alcohol in the past month, compared to 64 per cent of Coloradans and 59 per cent of adults in the United States. The rate of illicit drug use in Pitkin County was as high as eight per cent, compared with two per cent for the U.S.

At high elevation, you breathe and drink more

Medical student Justin Holt tells the newspaper that in a typical day for a normal adult, water loss includes 500 millilitres of water through the skin, 500 in urine, and 400 through respiration.

Parks Canada was able to nail down the exact dates for 11 local grizzly bears because they have been collared with GPS telemetry. The matriarch of the Bow Valley, a sow with three offspring still underpaw, was the first to enter a den, on Oct. 12, and the latest female denned on Nov. 9. The male grizzlies denned between Oct. 30 and Dec. 3.

Previous research showed that bears in the Rocky Mountains of Alberta spend, on average, 4 1/2 months of the year in or near their den sites.

Grizzly bears almost always dig their own dens, but, on occasion, they will use a natural chamber such as a cave or hollow tree. They typically dig a tunnel that opens up into a slightly larger chamber.

Studies elsewhere, including Yellowstone National Park, suggest that grizzly bears may be heading into the dens later, and emerging earlier, than ever before because of the changing climate. But Steve Michel, a human-wildlife conflict specialist for the park, pointed out that there's significant annual variability.

"It's not a rule to say that every year we're seeing bears denning later here," he said.

Staying in touch no matter where you are

ASPEN, Colo. — Electronic technology continues to find its way into the backcountry, as witnessed by an article in the Aspen Daily News about five local skiers who got caught in inclement weather while skiing to a backcountry hut.

En route to the hut, they encountered a large avalanche that spooked them. Returning toward Aspen, they found more evidence of avalanches. That did it. They decided to dig a snow cave and hunker down for the night as temperatures dropped and winds picked up.

One of the skiers had a next-generation personal locator beacon. By using a satellite signal that can be connected via Bluetooth to a smartphone, the beacon allows the user to exchange text messages with an emergency communications center run by a monitoring company. He apparently summoned help.

That company contacted the Aspen-Pitkin County Commissioners Center. There were some problems, but emergency crews dispatched several snowmobiles to retrieve the group, which was discovered by rescuers at 3,400 metres (11,000 feet) in elevation.

Heavens, how did we survive before we had gizmos to signal our presence in every wayward place?

BRECKENRIDGE, Colo. — The real estate thaw continues in Breckenridge, as evident in plans for new construction. The Summit Daily News reports that a five-storey base-area lodge has been approved, and construction is expected to start this summer, with sales to begin in the autumn of 2014. Included in the project of Breckenridge Grand Vacations will be 75 time-share units. Also included in the building, in addition to the usual spa, cafe and so forth, will be multiple movie theaters.

AVON, Colo. — A 24-year-old woman has been accused of negligent homicide in the death last month of a man who overdosed on heroin and other drugs. Roommates of Matthew Williamson of Avon called authorities in February to report he was not breathing. The district attorney in the Vail-Breckenridge area says that Kaile Leigh Wilson has been charged with drug distribution, reckless death and criminally negligent homicide.

The Vail Daily goes on to report that prosecutors say that a more lethal strain of heroin has been circulating in the Vail-Breckenridge area. As such, prosecutors also want to make dealers aware of the "very serious consequences that they will face if caught distributing this within our district."

BROOMFIELD, Colo. — Vail Resorts has announced it intends to invest $10 million in capital improvements at its newest ski resort, Michigan's Mt. Brighton. And it's also providing inducements for Mt. Brighton skiers to visit the eight ski areas that Vail owns in California and Colorado.

Mt. Brighton is located in the triangle of three of Michigan's largest cities: Detroit, Lansing, and Ann Arbor.

Upgrades include significant improvements to snowmaking, a new quad chairlift and terrain parks.

Clearly, Vail is priming Michigan skiers with the idea of tacking on a ski vacation to one of its eight resorts in Colorado and California. A normal season ski pass goes for $299. For $130 more, they can buy an Epic Pass. Kids can get the package for $269.

PARK CITY, Utah — While the argument continues about the proposal to link ski areas near Park City with those on the western side of the Wasatch Range with a gondola, Deer Valley continues to toy with the idea of a gondola to Park City's Main Street, reports The Park Record. It's not clear what crucial decisions remain to be made.

RED CLIFF, Colo. — The late Buster Beck, a one-time logger and miner in Red Cliff, a town a few miles from Vail, used to say that St. Patrick's Day was the tipping point for snow. Any snow that arrived after mid-March in the town, located at 2,667 metres (8,750 feet) in elevation, might build the snowpack temporarily, but within a day or two the snowpack would start slinking back on its way toward summer.

Above 2,750 metres, where more than 50 per cent of the snowpack in Colorado's mountains normally accumulates, the tipping point for the snowpack may come a bit later. But if limits are to be avoided this summer, it will need to start snowing hard in Colorado very soon.

Water managers aren't banking on it. They're planning on a dry summer.

In Vail, Diane Johnson of the Eagle River Water and Sanitation District calls it an "extreme drought." The local snowpack in early March stood at 70 per cent of the 30-year average.

In the Gunnison Basin, water managers tell the Crested Butte News that the snowpack this past week was still a whisker below two-thirds of the 30-year average.

Frank Kugel, general manager of the Upper Gunnison River Water Conservancy District, says it's likely that newer, or more junior water-rights holders in the basin may have to curtail their use of water to accommodate those with older, or more senior, rights in the corn and orchard country downstream on the Gunnison River.

In the Steamboat Springs area, roughly 240km (150 miles) north, water managers are also talking about it being a summer when not everybody gets his fill.

The Yampa River, which flows through Steamboat, is nearly the only major river in Colorado that has not been totally spoken for in a normal year. "We really are fortunate up here in the Yampa Basin that we really have had the water we've needed," said Erin Light, a government water engineer.

This year, however, scarcity, not plentitude, will prevail. Steamboat Today says local officials are calling for installation of more devices that can measure the flow of water. In a wet year, there's really no need for such devices.

And that, according to most climate projections for the Colorado River Basin, is a peek at the future as greenhouse gases continue to trap heat. No, not every year will be dry. But unlike the northern Rockies, a drying trend will be more likely than not.