SOUTH LAKE TAHOE, Calif. — Praise be the groomers and snowmakers. That was the message in many ski resorts as a broad swath of the West continued to have marginal snow this past week.
Jan 18, 2012 8:00 PM By: Allen Best 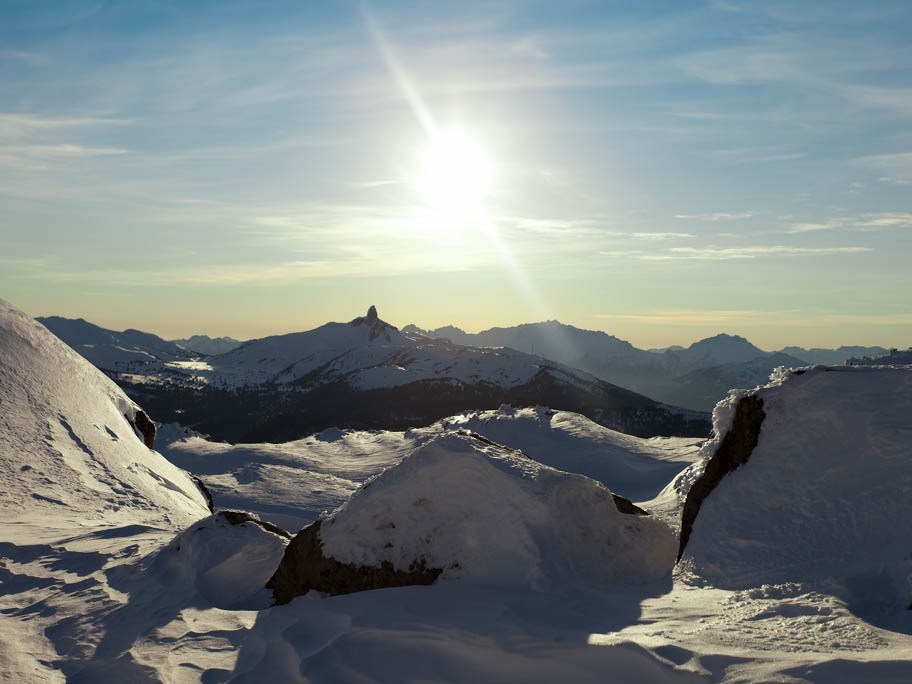 SOUTH LAKE TAHOE, Calif. — Praise be the groomers and snowmakers. That was the message in many ski resorts as a broad swath of the West continued to have marginal snow this past week.

"I've never seen a crew do so much with so little," wrote a reader in the Idaho Mountain Express, describing the grooming of Sun Valley's Bald Mountain.

On Monday, a storm rolled in across Park City and then into Colorado in what at least one meteorologist says is likely the harbinger of more to come.

"It wasn't a dump, by any means, but it was a great pick-me-up," reports Nan Chalat-Noaker, editor of The Park Record.

"It looks like we're in for a pattern change," said Mike Chamberlain, who is with the National Weather Service in Grand Junction, Colo. Chamberlain told the Steamboat Pilot of evidence that the ridge of high pressure that has kept snow mostly out of the forecast for Steamboat — and many other resorts from Tahoe to Breckenridge — is starting to break down.

In Park City on Saturday, dancers from the Northern Ute Nation, which is headquartered nearby in Utah, conducted a snow-blessing ceremony. This came several days after the town council passed a resolution declaring teams from the Deer Valley and Park City ski areas the "greatest snowmakers and groomers on Earth." It was, noted The Park Record, a play on the Utah ski industry's marketing slogan of "The Greatest Snow on Earth."

Idaho's Bogus Basin remains closed — the latest ever in the 62-year history of the ski area just outside of Boise.

In California, there was so little snow in the Tahoe Basin that the Forest Service issued a distinctly unseasonal warning: fire danger.

"We are essentially back in fire season," said Kit Bailey, fire chief of the Lake Tahoe Basin Management Unit.

In something of a related note, the Forest Service in the Lake Tahoe Basin approved thinning of trees and removal of bushes on more than 10,000 acres. Forest officials said the fuel reduction was needed to protect communities from the dangers of wildfire. No specific timetable was reported, although presumably the work will take many months, possibly several years.

Comparisons continue to be drawn to two prior drought years of note, 1976-'77 and 1980-'81. A former ski patroller remembers that in the first season, patrollers went through two or three pairs of skis because of all the rocks. Since then, Vail has invested heavily in snowmaking — although not in the Back Bowls®, which remain closed.

In Aspen, staff members too young or too new to have any knowledge of the winter of '76-'77, were dubious that the old days really were all that bad. Research by Scott Condon indicates that yes they were. Aspen received more snow in December than it had in that winter in the '70s, and it had less snowmaking. Aspen Mountain didn't open until Jan. 11 that year. Even then, there wasn't much skiing to remember. When the ski area closed, says the Times, it was with a whimper.

In Breckenridge, the Summit Daily News reports that local businesses have weathered the lack of snow reasonably well. "It's nice to have a resort that blows a lot of snow, and then a town that has a lot of options other than skiing," said Eric Mamula, local restaurateur and town council member.

In Aspen, the ski company reports a maximum of 17,000 skiers per day in late December at its four resorts, compared to a historical record of 20,000. Vail Resorts, however, reported a 15 per cent decline in skier numbers — with presumably a major portion of that hit coming from its two resorts at Lake Tahoe.

The flip side of this story is Whistler, which has had plenty of snow and enjoyed a particularly jovial Christmas. Some businesses reported unparalleled volume, with Europeans, Brits and Aussies in great evidence, but with the U.S. greenbacks also flowing liberally.

What will be the long-term consequence of this slow-mo winter across much of the United States? If resorts survived well enough through December, they acknowledge that the strong momentum for bookings has slowed.

JACKSON, Wyo. — By the simple metric of average per-capita income, Wyoming's Teton County is home to the nation's one per cent. Otherwise known as Jackson Hole, it annually leads or is among the top handful of counties in the nation by that measure of wealth.

But a new Community Health Assessment tells of another side to Jackson Hole. Reflecting effects of the recession and resulting unemployment, the report finds that Teton County's poverty rate shot up from 4.4 per cent to 9 per cent, Food Stamp participation more than doubled, and the number of people without health insurance tripled to 30 per cent.

"The lack of health insurance and unemployment are big health factors, because they lead to lots of stresses," said Terri Gregory, manager of Teton County Public Health.

Even so, Teton County has it better than most places. It leads Wyoming by the many metrics of public health, and Wyoming itself is statistically the 21st healthiest state in the nation.

KETCHUM, Idaho — Most people by now have heard of LEED-certified homes. Now comes an old idea, Passive Energy, which originated in the United States, was buffed up in Europe and now returned to North America as a formal standard for reducing energy demands of homes and other buildings from outside sources.

The Passive Energy standard accomplishes this by improved energy systems within a building and also renewable energy.

The Idaho Mountain Express tells of a century-old farmhouse near Fairfield, a town south of Ketchum and Sun Valley. The revamped house has super-dense insulation, gas-filled windows, and a ground-based heat-exchange system.

Vic Weber, owner of the home and a consultant with expertise in passive home design, said he hopes these systems will reduce heating and cooling costs by 90 per cent.

Standards for certification are set by the Illinois-based Passive House Institute.

CRESTED BUTTE, Colo. — Crested Butte Mountain Resort, thwarted in its plans to expand skiing onto Snodgrass Mountain in 2009, has gone back to the drawing board. The quest, as before, is to provide more ways to hold the interest of visitors for more than three or four days.

The latest sketch — it's not really a plan yet — would yield two more lifts on the existing ski mountain, servicing 100 acres more of intermediate terrain plus another 100 acres of extreme terrain. All of this would be intended to provide the sort of experience sometimes called backcountry lite or, alternatively, sidecountry.

The resort is toying with the idea of an easily accessible backcountry hut, suited to the skills of beginners and intermediates, reports the Crested Butte News.

ASPEN, Colo. — The Aspen Daily News describes a "band of folk art that Aspen can call its own." They are shrines, 45 altogether, by one count, located among the trees in the four local ski areas. The shrines pay tribute mostly to singers and other celebrities of earlier eras, but now increasingly to local residents who have died.

The first shrine, by most accounts, was to Elvis Presley after his death in 1977, but others were created to honor the Beatles, Stevie Ray Vaughan, and Jimi Hendrix. A shrine to Jerry Garcia was visited by Grateful Dead member Bob Weir and his wife during a trip to Aspen in 1999, moving Weir's wife to tears.

Much later, a tribute was created to honour Hunter S. Thompson, who lived near Aspen. The most recent shrine is to a 38-year-local who died in an avalanche in the backcountry near Aspen Highlands last spring. A group of friends and family gathered to construct the shrine a week later, putting up signs, skis and photos.

Not everyone is enthralled by the shrines. Tim Cooney, a ski patroller at Aspen since the '70s, told the Daily News that the proliferation of memorials has become gaudy. "What was once quirky and charming has become a blight," he said.

Cooney told the newspaper he would take people to visit shrines, when they ask, but he's adamant about encouraging people not to build more.

"People don't have an inalienable right to create shrines on mountains," he said. "It's a ski area, not a cemetery."

More disagreement about role of parks

BANFF, Alberta — Parks Canada is paying a consulting firm $25,000 to $50,000 to help identify new revenue streams, such as from retail sales, concessions, royalties and memberships in Banff and other national parks and historic sites, reports the Rocky Mountain Outlook.

Monica Andreef, executive director of the Association for Mountain Parks Protection and Enjoyment, said the agency should avoid new fees. Adding fees will discourage visits. Instead, she likes the additional of new recreational activities, such as via ferrata at Mount Norquay.

"They need to be innovative and consider what people want, rather than trying to figure out new ways to charge people more," she said.

But in Canmore, Alan MacFadyen thinks they have gone too far. He cites a proposal by the parent company of Brewster Travel Canada to create a "Glacial Discovery Walk" in Jasper National Park. The company, he says, want s to blast out a cliff in order to erect a 400-metre steel platform, the better to allow people to view the Sunwapata Valley — at a cost of $15 to $30 each. The same view may be currently accessed — for free — from a public parking area.

Writing in the Outlook, he reports fears of more "experience-enhancing" developments in Banff National Park. It is, he says, like a plotline from a bad movie.