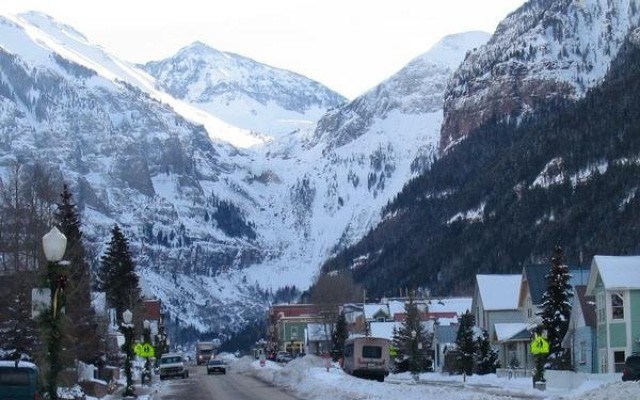 TELLURIDE, Colo. — Not much fresh snow? No problem for Telluride, which saw 478,000-skier visits this past winter, a record.

Greg Pack, the general manager for the ski area operator, Telluride Ski and Golf, attributes the gain to increased marketing to key demographics, particularly in Australia and South America that produced visitors in January when there was no snow.

Telluride's marketing effort also focuses on enticing Dallas/Fort Worth residents with an increased number of direct flights. An uptick was also observed from Durango, Colo., and Farmington, N.M., as well as Phoenix, Ariz., all within driving distance.

Allow boating on the rivers of Yellowstone?

JACKSON, Wyo. — Where do you draw the line in the sand — or in the water? That's the question du jour in Grand Teton and Yellowstone National Parks.

The two national parks currently restrict access by kayakers and packrafters to the creeks and rivers. A bill recently introduced into Congress by U.S. Rep. Cynthia Lummis (R-Wyo.) would increase the paddling access. The National Park Service opposes the increased access, reports E&E.

In the Jackson Hole News&Guide, long-time fishing and hunting columnist Paul Brawn frets about "bludgeoning visual impacts guaranteed with expanded aquatic recreation" but even more so about the potential spread of imported mussels, weeds and fish.

Braun admits he'd like to raft the Madison and other rivers. "But would I allow myself to consider such a reckless endeavour, knowing the harm it would ultimately bring to such a treasured domain? That answer is a resounding no," he writes.

"Asking eager and selfish recreation seekers to consider future damage they will inflict gets the same attention as requesting drivers not to talk and text while maneuvering Jackson streets, or begging dog owners to pick up after their pets."

Todd Wilkinson, also a regular columnist in the News&Guide, argues that packrafters have falsely invoked the name of Edward Abbey in their argument.

He turned to Doug Peacock, an expert on grizzly bears who was also the figure after whom Abbey modelled his fictional monkey-wrenching character "George Washington Hayduke."

"He believed there are some rare remaining spots on this plant that should not be exploited just to serve the interests of a few more thrill-seeking human egos," Peacock said, speaking of Abbey.

"You never negotiate surrender of a sacred place. If you are a recreationist who either can't understand that, or refuses to accept the power of self-restraint and leaving some places alone, then you have no business preaching to the rest of us what a conservationist is or isn't."

How tall is too tall?

JACKSON, Wyo. — And how much up is too much in buildings? In Jackson, that's been the centre of debate for a decade. Town officials have argued it's better to grow up instead of out — especially because there isn't much private land to grow out onto in Teton County.

Now, reports the Jackson Hole News&Guide, 15-metre tall apartment buildings have been authorized behind the local Kmart discount store. The apartments are to house employees of the Jackson Hole Mountain Resort.

While there was some dissent on the town council about that approval, there is likely to be even more significant debate as the town looks at just how much higher buildings should be allowed in the town core. Right now, it's just two storeys for buildings.

Keeping ghost signs but without the legal hassle

BOZEMAN, Mont. — Many towns have old advertisements painted on the sides of brick buildings. In Salida, Colo., for example, you can still see a giant pitch for Snow Drift, a laundry detergent.

In Bozeman, Mont., they're called ghost signs. But retaining the fading relics has been a hassle. Now, according to the Daily Chronicle, the city commissioners are preparing to adopt legal changes that make retaining the ghost signs less of a hassle, as historic buildings are redeveloped.

The redevelopment of one such building has triggered the city's regulations limiting the sizes of commercial signs, requiring a variance and an application fee.

"These kinds of community signs really do put us in touch with our roots," said Mayor Jeff Krauss. "If you're preserving history, we want to make sure we're not making it harder to do."

A long slog back from lows of the recession

STEAMBOAT SPRINGS, Colo. — Although every airport serving the ski towns of the West stumbled during the Great Recession, the Yampa Valley Regional Airport has been slower to return to pre-recession numbers than most.

Steve Horton, of Leibowitz & Horton, an airport management consultant based in metropolitan Denver, told local elected officials at a recent meeting covered by Steamboat Today that passenger enplanements peaked in 2007 at 149,765 and dropped to 95,917 in 2014.

But airports serving Jackson, Wyo., and Aspen, Colo. have come within two per cent of the pre-recessionary peak.

PARK CITY, Utah. — The Mountain Accord would knit the ski areas on the two sides of the Wasatch Range, allowing somebody in Park City, for example, to more readily access the slopes of Alta or Snowbird.

But Dana Williams, a former mayor of Park City, is pushing back. The Park Record reports that Williams appeared before the local municipal council that he headed for many years to warn of the dangers of trying to drive a tunnel under the narrow range to connect the ski areas by rail.

TRUCKEE, Calif. — Squaw Valley and Alpine Meadows are a step closer to becoming connected at the hip by a gondola.

In mid-April, Squaw Valley Ski Holdings announced it had reached agreement with the owner of private land located between the two ski areas south of Truckee.

The gondola would make it easy for skiers and riders to explore both mountains with a single lift ticket or season's pass, without needing to travel between the two by car, notes a press release posted at the company's website.

Squaw Valley Ski Holdings will partner with Troy Caldwell, the owner of the private land dubbed "White Wolf." The press release said the gondola needs approval from both Placer County and the U.S. Forest Service. The press release indicated that SE Group is being retained to design the gondola to minimize the overall footprint and potential visual impacts to the adjacent Granite Chief Wilderness.

SNOWMASS VILLAGE, Colo. — Ski areas continue to get bigger, even if just within their own britches. That's the case at Snowmass, the hardest-working ski area of the Aspen Skiing Co.'s quartet of operations.

The Forest Service has granted the company permission to thin trees on 63 acres. The Aspen Times says that the gladed areas to be thinned are already skied, but the trees are tight.

Rich Burkley, the vice president of mountain operations, said skiers and snowboarders must be at the top of their game when they venture into the gladed areas. By removing deadfall and some live trees, the glades will become more inviting.

A world different than the one we grew up in

ASPEN, Colo. — Aspen's elected officials have a new report to study that may guide their decisions about infrastructure as it relates to a warming climate. The study, prepared by the Aspen Center for Global Climate Institute, details a longer summer, earlier spring snowmelt, and longer dry periods interspersed by storms with greater intensity.

Aspen has already warmed 2.5 degrees Fahrenheit since 1950, with two degrees of that since 1980. That has also produced an average 23 fewer frost-free days annually, reports the Aspen Daily News, citing the report.

How much warmer will it get this century? That depends upon global emissions of greenhouse gases, pointed out Katzenberger, director of the institute, in a recent appearance before Pitkin County Commissioners.

SOUTH LAKE TAHOE, Calif. — The utility that delivers electricity to 49,000 customers in California in the Tahoe-Truckee area is removing coal from its power portfolio.

The Lake Tahoe News reports that Liberty Utilities has announced an agreement to eliminate power from a coal-fired plant in Nevada. Liberty seeks to buy and operate two solar plants that can together produce a maximum 65 megawatts and, if that is unavailable when needed, from other renewable sources.