Mountain News: Stilettos and other shoes in Jackson Hole

Stilettos and other shoes in Jackson Hole JACKSON, Wyo. — If not to the level of Imelda Marcos, Jackson Hole has closets full of shoes.
Jan 11, 2013 8:00 AM By: Allen Best 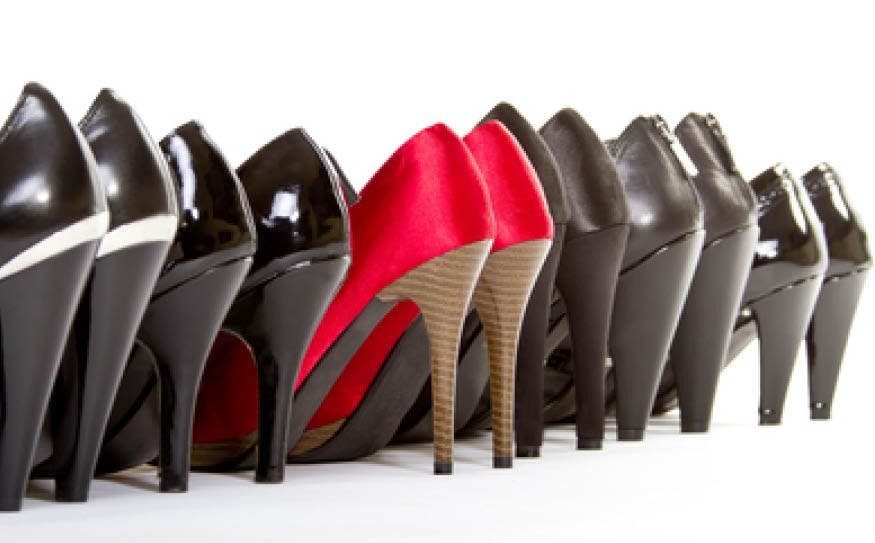 Stilettos and other shoes in Jackson Hole

JACKSON, Wyo. — If not to the level of Imelda Marcos, Jackson Hole has closets full of shoes. Ferreting out the fashionistas, the News&Guide found one woman with 80 pairs, but also plenty of women who still treasure high heels, despite living in a place where they seemingly have little utility.

"Frankly, I'm from New York," said an art gallery owner. "I can hail a taxi in 4-inch stilettos. I can pretty much go jogging in heels if I want to."

Another woman tells the News&Guide that she went shoe-crazy when still a child. Born with a clubfoot, she was forced to wear orthopedic shoes until the second grade.

"My mom took me to the store, and I picked out these shoes that were red and blue suede with white leather stars on them, because they were the loudest thing I could find. I was so happy to get out of hideous, orthopedic-style shoes."

But even men can have closets brimming with foot coverings for every occasion. Lindsay Wood, the News& Guide reporter, talked to Jay Pistono, a ski, fishing and mountain guide. He arrived in 1978, a time when Jackson was still plenty of cowboy.

Pistono tells the paper he never has owned a pair of cowboy boots, but he does have 26 to 30 pairs of specialized shoes for all weather conditions and situations.

"It's all based on function," he said. "I don't think I have a pair of shoes that would display a fashion statement."

By like many, Piston favors Italian shoes. Unlike the Gucci and Prada and Dolce Vita mentioned in the profiles of women, he likes boot-maker Scarpa. "Those people (Italians) know how to make shoes," he said.

As for Imelda Marcos, the widow of deposed Philippine dictator Ferdinand Marcos, she had 2,700 pairs, give or take a few dozen.

PARK CITY, Utah — Aspen and Jackson don't have the monopoly on billionaires in ski towns. The Park Record reveals that John Paul DeJoria, the bearded and pony-tailed icon for Paul Mitchell hair products, is a partner in a major redevelopment plan being prepared for Park City.

DeJoria, who is No. 92 on the Forbes magazine list of wealthiest Americans, said he has been buying and developing properties in Park City for more than 20 years.

The newest project, at Bonanza Park, would involve a mix of residential and commercial properties, perhaps in the same buildings, what is called multi-use.

In Whitefish, a 100-pound (45kg) lion was shot after peering into the window of a house. While the big cat may have been curious, wildlife officials told the Whitefish Pilot they want cats to have a deep fear of people.

"When you see them in the middle of the day, walking around looking in windows, it's lost some fear of people," said Jim Williams, of Montana Fish, Wildlife and Parks. "In this case, it was clearly not normal behavior."

Steamboat's snowfall among highest ever

STEAMBOAT SPRINGS, Colo. — Black and white, night and day, best of times and worst of times.

Last winter, Steamboat was without snow at the start of last ski season. This winter, a blast of storms before Christmas left Steamboat with almost 1.7 metres (67 inches) of snow in town, good enough for the sixth-highest total in December, reports Steamboat Today.

Whistler has also had bountiful snow, getting 3.4 metres (11.3 feet) of snow during December. "We started calling it Deepcember," said Nate Rigos, a spokesman for the Whistler Blackcomb ski area. The record for the ski area during December was 3.8 metres (12.5 feet).

BANFF, Alberta — While some have looked to scientists to nail down the risk of the changing climate, others have turned to the insurance industry, which is a master of actuarial tables.

And those risks are large, says Robert Tremblay, director of research with the Insurance Bureau of Canada.

The Rocky Mountain Outlook reports that Tremblay was in Banff recently for a conference with a subtitle of "Water Energy and Climate Security in a Changing World." He said that damage caused by fire didn't change from 1993 to 2009. But during that same time, water and rain damages more than doubled, from 16-17 per cent to 35 per cent. Wind damage has also increased.

He called for adaptation. "We need to protect society and economies from the impacts of more frequent severe weather events. The science is there. We need to adapt."

From the insurance perspective, Tremblay sees need for better infrastructure, such as storm sewers, to accommodate big rainstorms, even if the public favors recreation and cultural amenities.

"We need to invest more in infrastructure, less in opera houses and ice rinks."

But some adaptation techniques might not be all that expensive. He cited the example of a better-designed nail that can keep roofs secured better during hurricane winds.

He also said that it's time to quit talking about doomsday and more about how to adapt to more extreme weather events.

From skiing powder to skiing in bikinis

BOULDER, Colo. — Mark Williams ran a backcountry ski lodge in the Sierra Nevada near Mammoth for many years before he returned to school and became a scientist. Now, as a fellow at the Institute of Arctic and Alpine Research at the University of Colorado-Boulder, he has his fingers in everything from hydrofracturing, the controversial tool used in oil and gas drilling, to studying glacial snowmelt in the Himalaya.

But Williams also has done detailed studies of how the warming climate may affect downhill ski areas at Mt. Bachelor, Park City and Aspen.

Results will vary. "A small increase in air temperature in the Sierras moves you from snow to rain," he tells Elevation Outdoors. "In Colorado, it moves you from champagne powder to skiing in bikinis, but you're still skiing."

Or at least you're still skiing for a while.

A 2006 study for Aspen used three scenarios: decreasing greenhouse gas emissions; business as usual, and a "bad scenario," in which emissions of greenhouse gases accelerate due to ramped-up burning of fossil fuels.

What has happened since then is worse than bad, as China and India continue to build coal-fired power plants, in hopes of achieving lifestyles enjoyed by those of us in North America.

"With the bad scenario — and things are worse than that today — there's no skiable snow (by 2100 at higher elevations). What that means is what we do today, what we do in the next 10 years, really has a difference in 2050 or 2070," he tells the magazine. "The question is do we care?"