ASPEN, Colo. – When Ted Turner started buying ranchland in Montana in 1987, there was apprehension among the locals. He was, after all, a big money guy, the founder of CNN and TNT, the baseball team in Atlanta and who knows what else.
Aug 20, 2014 6:00 PM By: Allen Best 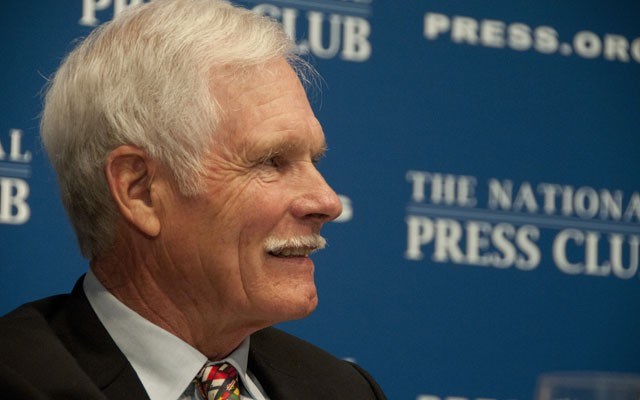 ASPEN, Colo. – When Ted Turner started buying ranchland in Montana in 1987, there was apprehension among the locals. He was, after all, a big money guy, the founder of CNN and TNT, the baseball team in Atlanta and who knows what else.

But Turner, in his 15 ranches in the West and three in Argentina, has turned out to be something other than a money-grubbing ogre. Turner has, argues Todd Wilkinson, in a new book called Last Stand: Ted Turner's Quest to Save a Troubled Planet, delivered an example for others about how to own land without abusing it.

Both Turner and Wilkinson were on the stage last week in Aspen, at the tail-end of a lengthy conference called American Renewable Energy Day. Despite the name, the conference ran four days and included a parade of well-known billionaires, former politicians (including Jimmy Carter), and others gathered to share thoughts about energy and climate change.

Wilkinson, who lives in Bozeman, Mont., near Turner's 45,978-hectare Flying D. Ranch, said he wanted to write a book that delivered the bottom line that business and sustainability aren't disparate goals. If the business community is not part of the movement, he said, "it will be a lost cause."

Bison populate the ranches, and Turner explained why. He said that growing up, he learned that 30 million bison at one time grazed on prairies of the American West. In a few decades of the late 19th century, all but a few thousand had died.

Turner said that he remembers thinking, "If I can just make enough money to buy some land when I grow up, I can bring bison back."

In fact, bison did return from the brink of extinction before Turner made his first billion dollars. But he has helped restore them in greater numbers – while also helping restore some of the over-grazed ranchlands

His trim mustache now as white as the driven snow, as is his hair, he displays a quirky humour. "I'm 75. I can't remember my grandkids' names," he said at one point.

His eldest grandchild, John Seydel, was on stage with him. A student at the University of Denver, Seydel is leading a movement to divest the school's endowment fund of carbon holdings, including coal, oil and natural gas. That was a major theme in the conference.

Wilkinson, whose book is now going into a paperback printing, a measure of success, at one point noted that the bison provide stability, being more resilient in their interaction with wolves in shared territory than cattle.

To that, Turner tilted his head back and let out a howl. Soon, everybody on stage was howling with him.

The Bozeman Daily Chronicle says that the profit is spurring United Airlines to expand summer service to include a second flight each week from the Newark airport. A daily flight to Atlanta will also be offered next year.

TAOS, N.M. – Taoseños, as the people of Taos call themselves, filled the city's central plaza on Aug. 9 to celebrate the 70th birthday of Smokey Bear.

The mythical creature that wants you to stop forest fires, explained The Taos News, has roots in New Mexico. In 1950, a firefighting crew from the Taos Pueblo called the Snowballs helped contain a fire elsewhere in New Mexico. As crew members climbed a hill to mop up the fire, they found a small and frightened bear cub that had taken shelter in a rock outcropping.

The bear was blistered from the fire but survived, becoming the model for Smokey Bear.

Or so the story goes. But if the bear was found in 1950, then why is the 70th birthday now being celebrated?

A website titled "The True Story of Smokey Bear" has a different creation story. It says that an animal illustrator named Albert Staehle was called upon during World War II to lend his skills to a fire-prevention campaign after a Japanese sub landed near a wooded area in southern California. He first painted a raccoon, but then decided a bear would be better. The name was taken from a famous New York City firefighter, Smokey Joe Martin.

This brings to mind the adage about success having multiple authors, while failure is always an orphan.

TELLURIDE, Colo. – Perhaps the oddest festival in Telluride's crowded summer schedule is something informally called Shroomfest, short for Mushroom Festival. It's now in its 33rd, or maybe 34th year, and although the lineup of speakers has changed, the basic mission has not. The festival extols mushrooms in every possible way.

There are lectures, a food fair, and a forest foray in search of tasty morels. For locals, there's a parade down Telluride's main street, a drum being banged joyously in a procession led by a Japanese imported pickup painted red with white dots, like the Amanita muscaria.

This year's conference included a report from a researcher at the Johns Hopkins University. There, psilocybin has been administered over 400 times to more than 200 people as part of a series of double-blind studies. A current investigation is whether psilocybin can be used to ameliorate depression and anxiety in individuals diagnosed with cancer, and also whether it can help people to quit smoking cigarettes.

Ramps for runaway trucks, but not bikes

GUNNISON, Colo. – Highway 50 tops Monarch Pass at an elevation of 3,447 metres (11,312 feet) before whooshing 1,520 metres (5,000 feet) down to Salida. Along the way there's a ramp filled with gravel for runaway trucks. There's no such equivalent place to slow down bicycles.

The pass is one leg of the USA Pro Cycling Challenge this week. One stage starts at Gunnison, the college town near Crested Butte, and goes over the pass to Salida, where the riders will have two 14.4-kilometre loops before the slog back up the pass and a finish line at the Monarch ski area, about 182 metres (600 vertical feet) shy of the summit.

The Gunnison Country Times reports that riders can be expected to scorch down the pass at speeds up to 110 km/h. The speed limit for cars and trucks is 70 km/h, and while you can expect to safely travel at 90 km/h during summer months, 110 km/h on narrow bicycle tires sounds maddening.

Will they crash? Like ski racing, there's always that possibility. The Gunnison Country Times explains that the key to winning this stage will be the use of domestique, a French word meaning "servant." In bicycle teams, they lead the way, allowing the top riders to follow in their wake, preserving energy.