Mountain News: Thin ice for elk, and for others, too

It's been a winter of thin ice. A cow elk fell through thin ice in Banff National Park last week and drowned. No attempt was made to save the ungulate, as park officials deemed it best to let nature take its course.
Mar 23, 2016 6:00 PM By: Allen Best 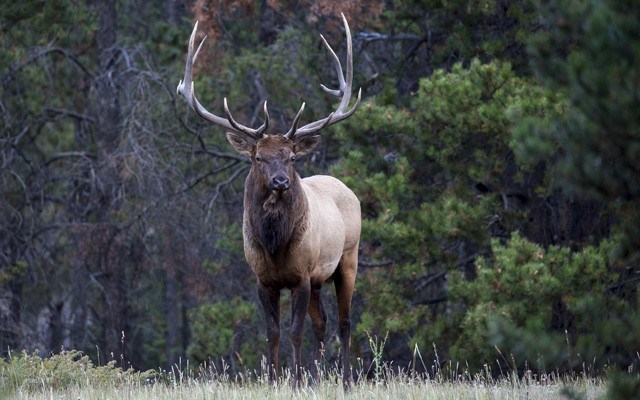 ON THIN ICe An elk fell through a patch of ice and drowned in Banff National Park last week. Shutterstock photo

It's been a winter of thin ice. A cow elk fell through thin ice in Banff National Park last week and drowned. No attempt was made to save the ungulate, as park officials deemed it best to let nature take its course.

Ice has also been thin in the Arctic Ocean this winter, a result of warm temperatures there but across the globe.

February, said scientists, was the hottest month ever for the globe of any of the 1,646 recorded temperatures going back to 1880. January and December had also set global records. The three months were all one-degree C warmer than the 20th century average.

"The planet is rapidly on its way to that two-degree mark, possibly faster than anyone imagined," said CNN. "In fact, average temperatures over land in February were a mind-boggling 4.16 F/2.31 C above normal, the first time the significant and symbolic two-degree Celsius bar has been topped."

The Associated Press found disagreements among scientists about what to make of the huge leap in temperatures. Gavin Schmidt, chief climate scientist at NASA, called it "obviously strange" but suggested the heat of previous months will not be a permanent situation.

But others weren't sure. Some talked about a "new normal."

Can El Niño be blamed? In part, but CNN explained that it alone fails to explain all the extra heat the planet has seen recently.

Some of the warmest temperatures compared to average were found in the far northern latitudes, uninfluenced by El Niño, which primarily impacts tropical and mid-latitude regions.

"It's being called the year without winter," reported The Globe and Mail. "Temperatures have been positively balmy across wide areas of the country, astounding weather experts at Environment Canada."

STEAMBOAT SPRINGS, Colo. — From Lincoln Avenue in Steamboat Springs, which calls itself Ski Town USA, it's roughly 32 kilometres via country roads to Twentymile Park. It's a pastoral landscape of serviceberry and oak brush, but the main work there is industrial: mining of dark-as-midnight subbituminous coal at the Twentymile Mine.

But there's trouble in coal mining. Peabody Energy, the largest coal producer in the United States and owner of Twentymile, announced it was delaying payment of $71.1 million in debt payments and might seek bankruptcy protection. The New York Times noted that this has been the path already taken by three of the other large coal companies in the United States.

Peabody had been trying to sell Twentymile and two other mines in New Mexico to raise cash. But the sale to Bowie Resources Partners appears to have stalled amid the difficult financing environment, said the Times.

The newspaper explained that banks have been pulling back from financing coal companies. The latest of the banks, JP Morgan Chase, announced it would no longer finance new coal-fired power plants in the United States or other wealthy nations.

"The retreat follows similar announcements by Bank of America, Citigroup and Morgan Stanley that they are, in one way or another, backing away from coal," the Times added.

Bankers have given different reasons: some want to do their part to curtail climate change. But for others, it's strictly a business decision: the risk. Coal is being undercut by less expensive energy sources, especially natural gas, but also by stiffening regulations.

Many environmental groups have been working hard for years to shove the coal industry into a corner. The Sierra Club famously created a video campaign that pictured coal as vaguely obscene and perverted.

In Northwest Colorado, the group WildEarth Guardians has tried to pinch coal mining operations with lawsuits. "The writing's on the wall: there is no future for coal," said Jeremy Nichols, the group's climate and energy program director.

"It's time for Peabody to acknowledge the realities of climate change and the need to keep coal in the ground."

CARBONDALE, Colo. — On April 5, voters in Carbondale will decide whether to adopt a tax of $0.0008 per kilowatt hour or $0.035 per therm for homes. The rate varies for commercial enterprises.

They are calling it a climate action tax in Carbondale, but it amounts to a carbon tax. The estimated revenues of $350,000 would be used to help people figure out how to reduce their demand for carbon, such as by insulating their homes. The measure would sunset within six years.

A one-time coal-mining town, Carbondale's last mine, Mid-Continent Coal, shut down in 1991.

VAIL, Colo. — The valley in which Vail, the town, is located is called the Gore Creek Valley, and it's a beautiful creek, shimmering in late-afternoon sunlight. Kayakers cavort in it, and those practitioners of the long cast do so with regularity, because it's designated as among Colorado's Gold Medal Trout Streams.

But it's not a pristine river, nor even a clean river. Along with a number of others that flow through Colorado mountain towns, Gore Creek in 2012 was listed as failing to meet new federal water quality standards.

The causes are many: homes with lawns that spread out to the high-water mark and the chemicals that get spread on them; city streets; and, by no means the least, the effect of sand and chemicals spread on Interstate 70 as it descends from Vail Pass.

After several years of discussing what to do, the Vail Town Council has approved a $9-million cleanup. The first year's plan budgets $750,000 for design and improvement to the town's storm drain system. The town also plans to hire somebody for two years with the express purpose of education.

What will success look like? According to the Vail Daily, Kristen Bertuglia, the town's sustainability manager, says she'd like to see a stable, or upward, trend in the number of macroinvertebrates. "That would be progress."

Why gender law is needed

WHITEFISH, Mont. — Elected officials in Whitefish this week were scheduled to hear a proposal that would make it illegal to discriminate based on sexual orientation and gender identity.

In Montana, the cities of Missoula, Helena, Butte, and Bozeman have all adopted a similar law. The town of Dillon rejected a similar proposal, as did Billings.

The Whitefish Pilot reported that the local proposal is being pushed by Coun. Frank Sweeney. "It's very hard to make the argument, in a civil society, that discrimination for gender identity or sexual orientation is fair," he said.

He acknowledged that some question why a new law is necessary when no problem has been apparent.