TRUCKEE, Calif. — Add two more mountain towns to the list of those crimping the distribution of plastic bags by retailers. The Sierra Sun reports that the Truckee Town Council has banned most disposable plastic bags.
Dec 11, 2013 8:00 PM By: Allen Best 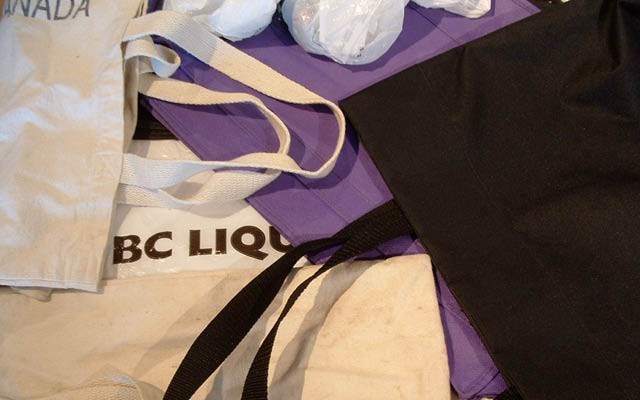 TRUCKEE, Calif. — Add two more mountain towns to the list of those crimping the distribution of plastic bags by retailers.

The Sierra Sun reports that the Truckee Town Council has banned most disposable plastic bags. Retailers must charge a minimum 10 cents for reusable bags or bags made of recycled paper. Retailers can keep the money to offset their costs.

Restaurants are excluded, including take-out establishments and any business that receives 90 per cent or more of its revenue from the sale of prepared food.

Hosannas once again for epic snowmakers

PARK CITY, Utah — As is customary this time of year, there was a certain nervousness as Thanksgiving approached and slopes remained brown. In an earlier time, this might have been manifested in chain-smoking.

But of course, when it's cold enough, the snowmakers can do their jobs. It's been cold enough, and so Deer Valley and other Park City resorts opened on time. Deer Valley's president, Bob Wheaton, described it as a "highly localized weather event."

Lake Tahoe resorts were spanked hard by drought two years ago. Slopes at Squaw Valley and elsewhere remained bare until late January. This year is starting out differently, but homage was again paid in Tahoe Magazine to the "insurance policy" of snowmaking.

Squaw last year invested $2.6 million in snowmaking and more yet was invested this year. The adjacent Alpine also has had significant upgrades by its owners, KSL Capital.

Fire and not enough snow?

TRUCKEE, Calif. — The largest fire in the recorded history of the Sierra Nevada occurred last summer, but things aren't setting up to be any better next summer. Meteorologists forecast mostly dry conditions throughout California next year.

This comes on the heels of two relatively dry years. At South Lake Tahoe, for example, the average since the late 1990s has been 38 centimetres (15 inches) of water during the winter months. The last two winters have produced substantially less.

South in the Sierra Nevada, the Rim fire started in mid-August and eventually covered 1,036,400 square kilometres near Yosemite National Park before official containment in late October.

The Sierra Sun reports that a new study predicts more intense fires yet. The past few decades have seen a significant increase in the size of high-severity fires and the acreage subjected to catastrophic burn, said the authors of a study released by the Sierra Nevada Conservancy.

The authors said that dry conditions are only one factor. Also playing a role in the increased combustibility of Sierra forests is human encroachment into wildland areas, which caused fire suppression for many decades, only delaying the problem.

REVELSTOKE, B.C. —– All did not end well when a bear that had been roaming in back yards drew a crowd in Revelstoke.

Police sounded sirens, directed lights, and hurled chunks of ice at the young bruin in an effort to get the bear to move along. These antics drew a crow of onlookers, some of whom got within what police said was dangerously close – 7.5 metres (25 feet) – of the agitated bear.

At length, the bear was chased across a bridge and then shot. The Revelstoke Times Review reports that not all in the community are happy with this ending. Police weren't happy with the onlookers. They also point out that a bear still out in December and with no clear fear of humans was likely to be dangerous to people.

BANFF, Alta — Quite a lot of fundraising is planned by the Banff Centre, which started out in downtown Banff in 1933 with a single drama course. It has now a large campus and hosts more than 8,000 artists, leaders and researchers who participate in programs each year.

The buildings, however, have become worn. The Rocky Mountain Outlook reports plans to rebuild two theatres, one with 1,000 sets and the other with 300, among other major improvements.

The cost for these and other improvements: $900 million.

Steamboat Today reports that the dog was being walked at a local park in late November when she ate something that a local veterinarian thinks was laced with marijuana.

The dog was lethargic, lacked interest in her Milk-Bone, and was skittish. The dog spent most of her time in the garage, staring at the wall. The other descriptions suggested paranoia.

A local veterinarian tells the newspaper that her clinic sees at least three cases of stoned dogs per month. "It's more common now that it's legal," said Dr. Paige Lorimer.

A study published in the 2010 in the Journal of Veterinary Emergency and Critical Care found a strong correlation between medical marijuana legalization and the number of cases of dogs being treated for marijuana ingestion.

Two deaths so far this year in Aspen

ASPEN, Colo. — Heroin is moving into smaller communities, and Aspen is no exception. The Aspen Daily reports at least two local deaths from heroin overdoses and another from an overdose of prescription medicine, painkillers.

At Aspen Valley Hospital, the emergency department has seen 21 cases of opiate "dependence, non-dependence, or poisoning," according to a hospital spokeswoman. Opiates in this case also include codeine, morphine, Dilaudid and Demerol.

The newspaper notes a Wall Street Journal article in August that pointed to plunging prices for heroin from Mexico.

"Heroin use in the U.S. is soaring, especially in rural areas, amid ample supply and a shift away from costlier prescription narcotics that are becoming tougher to acquire," the paper reported.

At Mind Springs Health, a detoxification unit in Aspen, 13 admissions have been for heroin.

"It used to be cocaine, alcohol and sedatives," said program director Andrea Pazdera of Aspen's drug habits. "Now, it seems to me there's more heroin use."

GRAND LAKE, Colo. — In the foothills and on the plains of northern Colorado, things are still a mess from the floods of September. Houses are still teetering over the banks of the St. Vrain and other creeks, and large segments of Lyons are dark at night, because the houses have been abandoned.

But the water infrastructure is coming back on line. The Sky-Hi News reports that diversions from the Colorado River through the Alva B. Adams Tunnel have begun again. The water is diverted under Rocky Mountain National Park and to a reservoir near Estes Park, and from there, distributed to cities and farms in the Fort Collins-Boulder-Greeley area.

Feds continue to make it easier for real estate

VAIL, Colo. — "Mortgage money is the cheap gas that keeps the real estate economy train moving," writes Chris Neuswanger, a mortgage loan originator in Avon. The question was whether the federal government would continue to make the money cheap.

It is, says Neuswanger, writing in the Vail Daily. He explains that there was considerable speculation that the federal government would reduce the amount of money it would deliver for loans in high-cost areas, such as those of Vail, Steamboat, Breckenridge and Aspen.

Though at least for 2014, the status quo will prevail.

"This means home buyers in Eagle County and the surrounding areas will find it easier to qualify and get a lower rate if they need a conventional loan between $417,000 and $625,000," he writes.

He adds that the interest rate will be one-eighth per cent higher than a loan for lesser amounts, and a down payment must be at least 10 to 20 per cent.

"This combined with a couple of other bits of good news lately should help the real estate market stay on course," he concludes.

Some think this is overly optimistic. "Everybody thinks it's 2007 again, but it's not," a real-estate professional in the Vail area tells Mountain Town News.

Some pushback on Squaw real estate

SQUAW VALLEY, Calif. — Community pushback is reported in response to plans to make Squaw Valley look a lot more like the destination ski resorts of the West.

After buying Squaw Valley several years ago, Denver-based KSL Capital Partners announced plans for $50 million in investment into the product. Some of that investment is in the form of snowmaking and other mountain improvements.

But the company also plans to significantly expand the real estate and commercial component. The original plan for 1,093 new lodging units and a year-round indoor activity center provoked enough opposition that the company went back to the drawing board.

Just how deep are the worry lines? The Sierra Sun reports the results of an online survey, which suggest major concerns. Tom Mooers, director of Sierra Watch, the group that posted the survey, concedes the poll wasn't scientific, but says it makes a point.

"It shows there's a deep connection based on love of the mountains and outdoors, and that those values shouldn't be lost to irresponsible development," he said. The bottom-line message: "not so fast."

A modified plan is expected to be submitted soon to planning officials in Placer County.

JACKSON, Wyo. — Councillors in Jackson are putting the kibosh on using mobile devices while driving. That means no talking on cell phones, no texting, no taking photos.

"There's really no compelling argument against this proposal — saying we deserve the right to be distracted by driving," Councillor Jim Stanford said at a recent meeting.

The proposal was introduced by Mayor Mark Barron. In the past, he has resisted efforts to impose edicts, such as a ban on plastic or no-smoking in bars. He sees this as different.

"I'm just not going to sit idly by and see someone get seriously hurt," he said.

The Jackson Hole News&Guide points to several examples, most prominently the death of a popular local 19-year-old in 2009 while skateboarding on a rural road in Maine. He had been struck by an inattentive driver reaching for his phone. This past summer, a local girl died in a crash, and state troopers found an iPad with the log-in screen up.

Exempted would be hands-free operations, use by authorized emergency vehicles, and people in a parked, stationary vehicle off the roadway.

The News&Guide says 12 states and the District of Columbia have adopted similar bans.

While there seems to be no public pushback to this proposal, a separate proposal is getting dissent. It would give local police broad latitude in ticketing drivers for "inattentive driving." While the proposal passed four to one in the city council, the News&Guide wasn't persuaded. The idea, said the newspaper, "doesn't pass muster."

TRUCKEE, Colo. — More deaths have been reported from carbon monoxide poisoning. The Sierra Sun explains that two men died in a home at Tahoe Donner in October, and local officials are pointing out that the deaths could have been prevented if a carbon monoxide detector had been installed.

The Center for Disease Control reports 400 annual deaths in the United States from carbon monoxide poisoning, and another 200,000 emergency-room visits. Fatality is highest among those 65 and older.