CRESTED BUTTE, Colo. — Crested Butte residents are being urged to overcome their natural tendency toward friendliness and instead summon up their most aggravating qualities and behavior, at least during bear season.
Aug 15, 2012 9:00 PM By: Allen Best 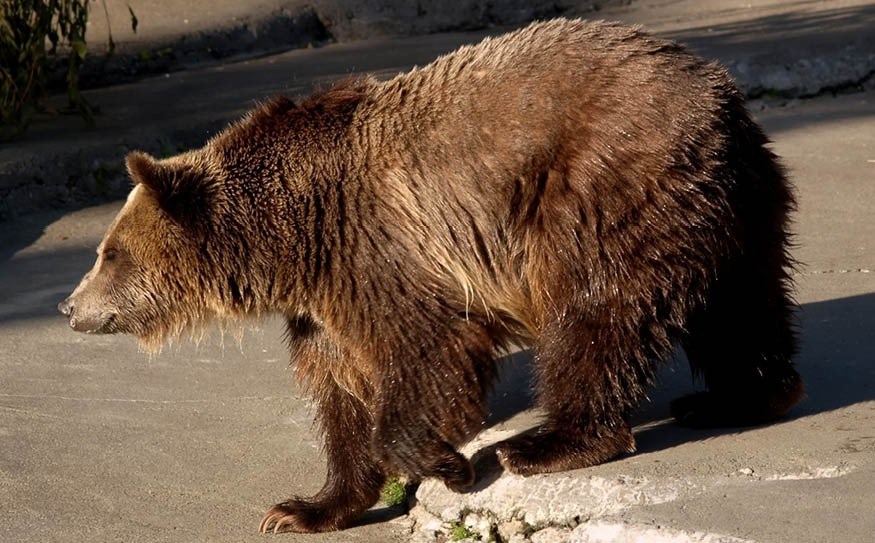 CRESTED BUTTE, Colo. — Crested Butte residents are being urged to overcome their natural tendency toward friendliness and instead summon up their most aggravating qualities and behavior, at least during bear season.

In July, with drought very much reducing the crop of backcountry berries and nuts, bears have been much in evidence. Bears have invaded several homes, and in one case killed the house dog. In another case, a bear killed a dog just outside the town.

J. Wenum, the state wildlife officer, told the Crested Butte News that the "more a bear feels unwelcome, the less likely it is to stick around or come back. Do something to make it feel unwelcome. Bang pots and pans, yell at it. Make it uncomfortable."

About 163 kilometres away, on the opposite site of the Elk Range, a 200-kilogram bear evaded police by scrambling through an alley behind The Gap clothing store and then surprising shoppers at a Farmers' Market, tearing through a Honeypot Alpaca Farms booth before climbing a tree. The Aspen Daily News says the bear hung out in a tree, most definitely a tourist attraction, before stealing away at dusk.

Wildlife officials tell the Aspen Daily News that the number of bears in town substantially increased in early August. One of them, a cub, walked through the putt-putt golf course, then later wandered through the municipal parking garage.

And in Telluride there was outrage after state wildlife officers killed a bear that they believed had broken into a home. That is standard policy for bears in Colorado. Several council members objected, citing the lack of overwhelming proof of the bear's identity.

"If I were a bear in Telluride today, I would consider defecting to Syria, because it's safer," said Thom Carnavale.

San Juans soon to be on road bike world stage

TELLURDE, Colo. — The Pro Cycling Challenge returns to Colorado starting Aug. 20, this year starting in Durango and wending north through Telluride, Crested Butte and Aspen on the way to a finish in downtown Denver.

Seth Cagin, publisher of The Telluride Watch, notes some skepticism in Telluride about this new event, now in its second year in Colorado. But Cagin says there are times to put doubts aside and exult in the moment.

"The world is coming to us! How cool is that?" he says while extolling the marketing opportunities afforded by the bicycle race.

Tens of thousands of spectators lined the racecourse in Aspen, Vail, Steamboat and other mountain towns along the race course last year, and more than that in Denver. Sponsors think they can soon build it into the world's second biggest bicycle race in the world, after the Tour de France.

PARK CITY, Utah — Police in Park City, normally aggressive in enforcing the 25 mph speed limit, gave a wide berth to 55 mph speeders on Sunday as the Tour of Utah rolled through town.

JACKSON, Wyo. — Yet again, an overloaded truck has tumbled on the steep descent from Teton Pass into Jackson Hole. The truck was carrying a load of talcum, and the 50-year-old truck driver, who was relatively new on the job, had disregarded the weight limit for the pass and bypassed the first runaway truck ramp.

The talc spilled down the hillside, looking like snow, reported the Jackson Hole News and Guide. But why did the driver even go that way?

Mapquest gives two routes between Dillon, Mont., and the cargo's destination of Evansville, Ind. and neither comes close to Jackson Hole. The driver told his supervisor that GPS told him to cross the pass, and so he did.

Weekly skirmishes in the files of Wikipedia

ASPEN, Colo. — Check out the Wikipedia entry for the Aspen Skiing Co. and you may well find some remarks that suggest the company is a bully. Ditto for the art museum in Aspen.

In both cases, the reporting was probably done by Lee Mulcahy, a former ski instructor who has been banned from the property of both and is suing the owners and chief executive of the ski company.

For example, explains the Aspen Daily News, you may discover that the ski company fired a singer who sang an unfavorable song about rich people in one of the company's bars during après ski.

"He's been doing it for awhile," said Jeff Hanle, the spokesman for the ski company, speaking of the information Mulcahy has posted on the Wikipedia site for Aspen Skiing. "We have taken it down and it goes back up."

In his interview with the newspaper, Mulcahy portrayed himself as a David battling Goliath — and, in the case of the art museum, he's conceded defeat. "I gave up since they have a staff of 20-plus people," he said.

A representative of Wikipedia told the Daily News that the public-sourced website has a policy that discourages companies or individuals from editing information about themselves to prevent the pages from being nothing more than public relations mechanisms. But, said Matthew Roth, it happens all the time.

VAIL, Colo. — After decades when the cutting of a tree was seen as sacrilegious, many have fallen in recent years, particularly those which have been killed by a fungus spread by bark beetles.

Does the town remain vulnerable to wildfire? Mayor Andy Daly wanted to know at a recent meeting. There were no easy, short answers, and it was summarized by the Vail Daily as "there's more work to be done." As, perhaps, there always will be in ski towns located amid disturbance-prone ecosystems.

Next prez to enjoy gains in real estate

STEAMBOAT SPRINGS, Colo. — Regardless of whether it's President Obama or President Romney come January, the economy will be improving. So says Lawrence Yun, who is the chief economist for the National Association of Realtors.

Yun spoke to realty agents in Steamboat recently, and he said that real estate trends are more encouraging than some national news organizations have been reporting, reports Steamboat Today.

He also noted the rising average sales price of homes in the Steamboat area, but said the turnaround is driven more by investors who see the value of buying low and collecting rent than it is by people who intend to use the vacation homes.

SILVERTHORNE, Colo. — Yet another big box retail store has appeared on the I-70 corridor in Colorado. The Summit Daily News reports that Lowe's Home Improvement Warehouse was scheduled for a grand opening this week. It's located at Silverthorne, and will allow shoppers from Summit to forego trips to Denver, about 96 kilometres east, or Avon, 48 kilometres west, for discount-priced hardware.