VAIL, Colo. — In anticipation of its 50th winter of operations, Vail is completing installation of a new gondola, using the same alignment as the original gondola when operations began in 1962. The similarities end there, however.
Oct 24, 2012 9:00 PM By: Allen Best 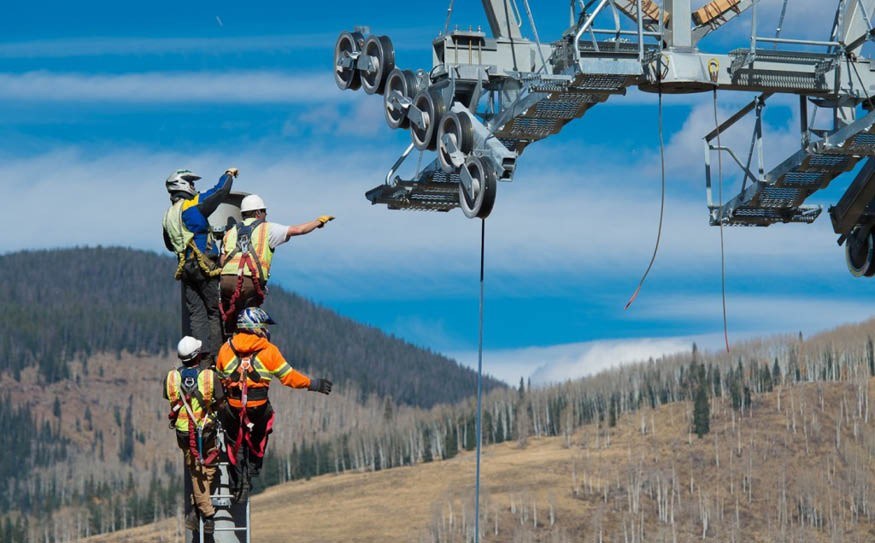 NIFTY FIFTY Construction of a new gondola at Vail coincides with the 50th anniversary of the mountain this season. Photo Courtesy of Vail.com

VAIL, Colo. — In anticipation of its 50th winter of operations, Vail is completing installation of a new gondola, using the same alignment as the original gondola when operations began in 1962.

The similarities end there, however. Each car on this new gondola will have heated leather seats and Wi-Fi access. It's also the fastest of its type in the world.

Meanwhile, the Forest Service approval of a ski area expansion at Breckenridge has been appealed by two groups, reports the Summit Daily News. One of the appeals contends that habitat for lynx will be fragmented by the ski area operations.

The Aspen Skiing Co. will be allowed to go forward with its 230-acre expansion in an area of Snowmass called Burnt Mountain. A U.S. District Court judge ruled that a Wyoming group was out of order in its objection and should have noted its argument at the proper time. The expansion will make Snowmass the second largest ski area in Colorado, behind Vail.

A milestone for water diversions in Colorado

VAIL, Colo. — If 1962 was a big year for skiing, with the opening of Vail, in Colorado it was also notable for benchmarks in diversion of water. One project was completed and another was started, the two of them substantially enlarging the unnatural flow of water from the Colorado River Basin to the Front Range of Colorado.

Colorado is an unbalanced state. Nearly 80 per cent of precipitation in the state falls west of the Continental Divide, where nearly all of Colorado's ski areas are located, mostly in the form of snow. But 80 per cent of its population and an even higher percentage of its farms and ranches live on the eastern side.

Diversions across the Continental Divide began in 1911 and accelerated in 1936 when dewatering of creeks around Winter Park began. But 1962 was a huge year for this export of water. That year, Denver finished a new tunnel that is three metres in diameter and 37.5 kilometres long. The tunnel diverts water from Dillon Reservoir into the South Platte River, upstream from Denver.

Also in 1962, President John F. Kennedy gave a speech kicking off construction of the Fryingpan-Arkansas Project. The project diverts water from the Fryingpan and Roaring Fork Rivers, both located in the Aspen area, to cantaloupe and other farms in the Arkansas River Valley. Some of that water has now found its way to metropolitan Denver.

Now, Colorado faces a new issue. Instead of figuring out how to develop its water, the key question is how much water it has left to develop — if any. The Colorado River Compact of 1922 apportions water among the seven states from Wyoming to California. It also requires Colorado and other upper-basin states to deliver 7.5 million acre-feet of water to the lower-basin states on a rolling 10-year average.

During the last 30 years, Colorado and other upper-basin states have delivered an average of 10.8 million acre-feet. But that average has been exceeded only three times out of the last 12, reports John McClow of Gunnison, writing in the Grand Junction Free Press. 2012 was particularly bad: just a little over 2 million acre-feet of water flowed into Lake Powell from April through July, the prime runoff months, reports Jim Pokrandt of the Colorado River Water Conservation District.

In Park City, property sales were up four per cent during summer and median property prices rose 11 per cent from the year before.

"It's a slow but steady improvement," said Mark Seltenrich, the statistician from the Park City Board of Realtors. "The biggest trend is that the really cheap properties, the low-priced condos or low-priced lots, are not there anymore."

Curt Singleton, executive director, told The Park Record the rebounding market is reflected in the expanding roster of sales agents affiliated with his organization. "More people are getting back into real estate."

From Vail comes much the same story, with the bottom-end foreclosures being cleared out in the down-valley markets at Eagle and Gypsum. Several agents told Mountain Town News that they have had multiple offers on properties, the first time in some years for that to happen.

Park City hosted half of the athletic events when Salt Lake City hosted the Olympics in 2002. The report says that Canyons, one of the ski areas at Park City, should host events if Utah gets the event again.

The group estimates cost of bidding for the Olympics at $25 to $30 million.

Since Park City hosted the Olympics, the number of rooms has increased 28 per cent.

Some things in life you just can't do

That is the lesson from New Mexico, where the five commissioners for Taos County voted to name three public buildings at the county's $46 million judicial, administrative and detention complex after themselves.

The Taos News reports that the chairman, Joe Mike Duran, justified the naming because the commissioners had "gone through a lot."

But after the plan got broad attention, much of it with sharply unfavorable comments, the commissioners backed off, explains the News. Instead, the buildings will remain unnamed — and the commissioners will get recognized on a bronze plaque noting their roles in overseeing the construction.

WHITEFISH, Mont. — With the arrival of smart phones, existing cell phone infrastructure is getting taxed. To help the situation in downtown Whitefish, Verizon Wireless wants to erect a 30-metre cell phone tower. While there are many concerns about safety and aesthetics, the company wants to disguise it as a faux pine tree, snuggled amidst a row of 24-metre-tall poplars, reports the Whitefish Pilot.

WEST YELLOWSTONE, Mont. — As the last of aspen leaves flitter to forest floors, the talk in mountain towns across the Rocky Mountains is of snow.

Two winters ago, people in Crested Butte got quite upset because of all the snow mucking up streets. There had to be a better way. And so town officials developed a plan — but had no reason to test it last winter. Instead, people were still mountain biking on trails in January. This year, locals would be just fine with more attention needed to ski wax than tire tread.

ASPEN, Colo. — A new backcountry hut has been installed in the Elk Range between Aspen and Crested Butte. Called Opa, the German name for grandpa, it honors Alfred Braun, who immigrated to the United States in 1928 and arrived in Aspen during the early 1950s. He operated a ski lodge and earned a reputation as a skilled alpinist and promoter of the mountain lifestyle. He was known as Opa to his family and friends.

In 1967, he took over operations of a hut system and added more, building them himself with help from family and friends.

This new hut, however, may outdo all others. The Aspen Times describes it as "stunning," as it's tucked into a granite-lined niche at 3,700-metres, with jagged peaks riveting one's gaze from left to right.

"Like all huts in the Braun system, Opa's won't be for the casual backcountry traveller," explains the Times. "Nearly all the routes to Braun huts cross big avalanche paths. The huts also can be difficult to find. There are no trail signs."

The 10th Mountain Division huts of the Aspen-Vail-Breckenridge area are more forgiving of mistakes. Routes generally detour well away from avalanche paths and the trails are nearly as well marked as city streets. That said, even they can be difficult when the snow is falling hard, it's getting dark and temperatures plunge.

STEAMBOAT SPRINGS, Colo. — Natural gas drilling and some potential for oil continues to be in the news at many ski towns in Colorado. The drilling potential is not in any of the ski towns proper, but rather in outlying areas, including some favorite forested playgrounds.

Such drilling has been happening for decades south of Durango. But the rigs are relatively new near Steamboat. Local officials want to be ready, to ensure impacts are limited.

Some landowners would just as soon government keeps its nose out of such affairs. Writing in Steamboat Today, Vonnie Frentress says some land and mineral owners see the oil and gas industry as business partners. "Diversified revenue sources can increase the financial strength of area agricultural operations."

From Aspen and its suburbs in the Roaring Fork Valley comes a different tune. There, the dominant worry has been of impacts to treasured spots from drilling.

The Forest Service owns much of the land west of Carbondale, including the site of the Sunlight Mountain ski area. For whatever reason, the Forest Service plans had allowed drilling rigs on the ski slopes. That oversight has been corrected.

Now, the Forest Service is proposing to reduce the acreages where leasing by oil companies would be allowed by 33 per cent. The Aspen Times reports that the oil and gas industry is none too happy. But neither are environmental and conservation groups. Peter Hart, spokesman for the Wilderness Workshop, said his group favors removing all lands not now leased from future leasing.