Mountain News: When should store doors be closed?

When should store doors be closed? BANFF, Alberta — In Banff, as elsewhere, there are complaints that leaving store doors open during cold winter months is an extravagant waste of energy, unbefitting a national park that celebrates the environm
Apr 10, 2013 9:00 PM By: Allen Best 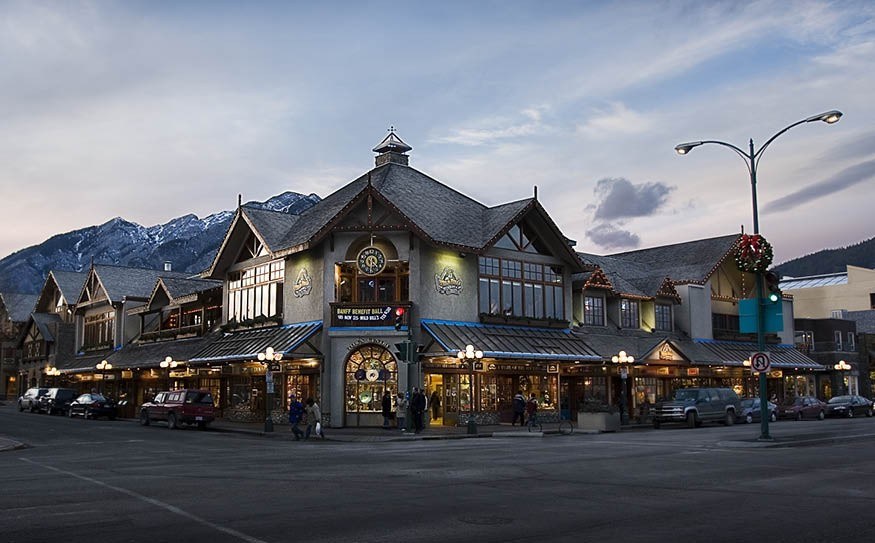 When should store doors be closed?

BANFF, Alberta — In Banff, as elsewhere, there are complaints that leaving store doors open during cold winter months is an extravagant waste of energy, unbefitting a national park that celebrates the environment.

And, as elsewhere, there is pushback from shop owners, who say they need to leave the doors open, so that customers will walk in.

What to do? The council indicated that it wants to see a proposal from the town staff that would set a temperature threshold for when doors must be closed.

KREMMLING, Colo. – Drones have purposes other than picking off enemy soldiers. On Colorado's Western Slope, they're being used to peek on the sexual proclivities of sage grouse.

The Sky-Hi News explains that the small, unmanned aircraft loaned from the U.S. military are being used to study everything from contour surface mines in West Virginia to soil erosion in South Dakota. The drones are about 2kgs and have a wingspan of 140 cms, or about the size of a bald eagle.

In Colorado, the devices allow state wildlife biologists to track sage grouse, a species declining in population. The birds commonly mate during springs in areas called leks. Mud and lingering snow thwart travel in more remote areas, where the leks would likely be found.

Drones were also used to track the migration of sandhill cranes through Colorado's San Luis Valley.

PARK CITY, Utah – Park City is unique among destination mountain resorts in its proximity to a major metropolitan area. It's just 35 minutes from the airport in Salt Lake City to the resort, despite the fact they're on opposite sides of the Wasatch Range.

But that proximity also poses a problem. Park City and surrounding Summit County are sometimes awash in the pollution from the Salt Lake Valley.

The Park Record reports that ozone levels at one location in Summit County exceeded the Environmental Protection Agency's specified limits 10 days in 2012. Salt Lake City itself exceeded the limit for seven days.

ASPEN, Colo. — A forum about immigration is planned in Aspen, a place that depends heavily on labourers from outside the United States.

"The key is, how is the country going to positively address the fact that an estimated eight to 10 million illegal people are employed now?" said Warren Klug, a member of the board of directors of the Aspen Chamber Resort Association.

Klug estimates that half of the 55 people employed this winter at the Aspen Square Condominium Hotel, where he is the general manager, were born outside the United States. The hotel follows the law in checking the documentation of its foreign workers, but the law is not perfect, he said.

The forum is sponsored by the resort association and the Aspen Institute and hopes to have speakers from Congress and the White House.

Something called the Colorado Compact, which was put together by Colorado Sen. Mike Bennet, has drawn broad support, including both the Aspen and Vail skiing companies, but also agriculture interests.

BRECKENRIDGE, Colo. — After months of preparation, Breckenridge's town council this week was scheduled to again take up a proposal to levy a 10-cent fee on all plastic and paper bags issued at stores in Breckenridge.

Similar to Aspen, Telluride, and several other resort communities, Breckenridge had first talked about a full ban of plastic bags issued by grocery stores. But a task force that included retailers came up with different ideas. Big grocery stores won't be singled out. Only restaurants will be exempted.

Too, the bags are not banned, only taxed. The money — technically a fee — is to be split between retailers and the town government. The town's logo would be used, in part, to create reusable bags with the Breckenridge logo. Currently, merchants in Breckenridge distribute more than three million plastic bags each year, notes the Summit Daily News.

In Whistler, officials remain intent on reducing distribution of plastic bags. "The problem (on a global scale) is getting catastrophic," said councillor Jayson Faulkner.

The councillors have given grocers and drug store retailers until June to find a way reduce plastic bags. "We're going to do something," said Mayor Nancy Wilhelm-Morden. "Let's give private industry an opportunity to make some recommendations to us. Hopefully they're good enough for us and we can move forward."

The Alliance of Grocery and Drug Stores in Whistler submitted a letter that fretted about degrading the shopping experience and pushed back at some assumptions. "The available science indicates that paper and cloth have a greater negative impact than degradable plastic, and the reusable bags retailers have been using for years are risky at best," said the letter.

But the council is just as firm. "The statistics really are staggering, and we have to do something," said the mayor.

JACKSON, Wyo. — Sifting though data about enplanements and such, number-cruncher Jonathan Schechter at the Jackson Hole News&Guide finds that Jackson and Teton County are uncommonly blessed for those who just want to get away.

The valley's airport, located in Grand Teton National Park, recorded 279,000 enplanements in 2011, the most recent year for which numbers are available. This compares with airports serving Missoula, Mont; Medford, Ore.; and Augusta, Ga. All serve areas with three to 20 times as many full-time residents.

But what about apples to apples, the other resort areas? Nantucket, Mass., has bigger numbers, but Schechter points out that sky-high housing prices during summer cause many employees to shuttle daily from the mainland, inflating numbers.

The only other mountain resort that comes close is Aspen. While Jackson has 8.9 enplanements per resident, Aspen has seven, and the airport serving Steamboat Springs has 4.5. Down the list are Durango at 3.4 and Eagle (Vail).

"For me, the big takeaway from this exercise is that we in Jackson Hole enjoy a profoundly phenomenal level of air service — another of the embarrassment of riches of living here," writes Schechter.

STEAMBOAT SPRINGS, Colo. — While it has been snowing in Colorado, the snowpack remains below average. And due to effects of a phenomenal drought last year, the water situation looks none too good for summer.

Along the Front Range of Colorado, some cities are limiting outdoor watering to two days per week.

As was the case last year, temperatures are predicted to be hotter than normal, which translates into a longer irrigation season.

Recycling to be mandatory

VAIL, Colo. — Recycling will soon become mandatory in Vail, although the exact regulations have yet to be adopted. Public officials tell the Vail Daily that they want to start getting the word out, as it takes time to implement such programs.

"We need people to know that some time in the next 6 to 12 months we're going to start in with mandatory recycling," said Mayor Andy Daily. "And everything I've heard from people is that it's about time."

It's a division common in Colorado. Sheriffs have been loudly dismissive of the gun laws, some of them asserting they will not enforce the laws. Police chiefs have generally come out in support.

Why the difference? One idea is that urban populations more generally support limits on guns. Rural areas don't. Police chiefs are found in towns and cities, and generally appointed. Sheriffs are elected.

Henninger said that part of his position is informed by personal experience. He was shot 30 years ago in Garden Grove, Calif. Had there been better background checks — as is provided for by one of Colorado's new laws — he believes the man who shot him might have been unable to get a gun.

Henninger is among several police chiefs from around the United States who appears in the latest television ad from Mayors Against Illegal Guns.

ASPEN, Colo. — To encourage people to use less electricity, Aspen adopted a tiered rate structure, charging incrementally higher rates for the users of greater volumes. As well, there have been programs to help commercial and residential customers reduce consumption.

The strategies seem to have worked. Electricity use has declined 3.3 per cent per year since 2008.

This presents a problem, as this means less revenue for utility operation, reports the Aspen Daily News. "But it's a good problem to have," said Mayor Mick Ireland.

TURMOIL IN LAND OF ZOMBIE SUBDIVISIONS

DRIGGS, Idaho – In the last decade, Teton County has become a poster child for the bankruptcy of largely carte blanche land development. The result has been what is called zombie subdivisions, or approved projects sitting empty or mostly empty.

It's a beautiful valley, once called Pierre's Hole, separated from Jackson Hole, in Wyoming, by the Teton Range. Unlike Jackson, with its easy access to Yellowstone and Grand Teton, Driggs and other communities have struggled a great deal economically.

Early in the last decade, as the real estate frenzy mounted across the country, developers came calling, and many potato-and-barely farmers were only too ready to cash out and enjoy the good life. Some of this was overflow from Jackson Hole.

But that's when things got difficult. To the alarm of some people, big farms distant from the valley's few small towns — Driggs, Victor and the absolutely tiny Tetonia — were being subdivided with little thought to impacts of roads, wildlife, and other environmental and economic considerations. Battle lines blurred, but there was a battle of old versus new, and Democrats versus Republicans.

Then, in 2007, Democrats and pro-planning forces prevailed — just as the economy began tumbling. One impulse was to be even more libertine in land use, approving even more. But ultimately the voices for more restraint prevailed and the county has tried to undo some of the damage.

In this great community debate, elections have consistently been close, revealing a community divided.

Last November, with the economy still sluggish, the old guard prevailed and the outcome of that public vote is a 2-to-1 majority for Republicans in the county commission chambers.

The Teton Valley Citizen reports that the majority of commissioners have concluded that a compromise will be to replace one of the two county planners with a planner who somewhat better reflects the values of the older and mostly Republican residents.

"One of our planners needs to be let go so we can bring in someone else to help our community heal," said Commissioner Sid Kunz.

It was a compromise, he insisted. "I'm not saying get rid of both and cater to every farmer," although that seemed to be his druthers.

The valley has about 1,200 residents and about 8,000 subdivided lots. The Lincoln Institute has estimated that it could take 40 or 50 years for the real estate market to absorb that many units.