WHITEFISH, Mont. — Floridian Sue Austin zipped through Whitefish recently, as she has been doing across the United States.
Oct 2, 2013 9:00 PM By: Allen Best 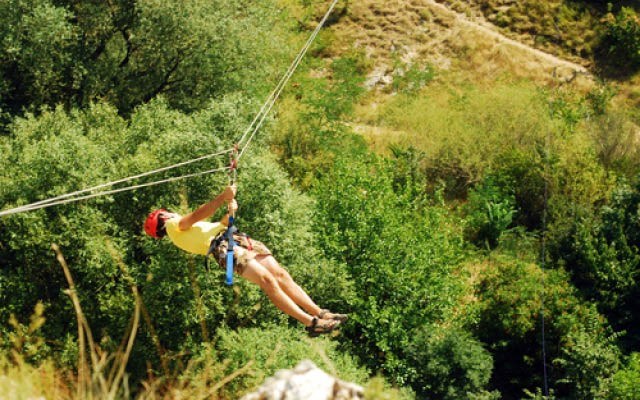 WHITEFISH, Mont. — Floridian Sue Austin zipped through Whitefish recently, as she has been doing across the United States. The Whitefish Pilot says she has been on 500 ziplines, including one across the Colorado River, presumably at Glenwood Springs, Colo. She even zipped in a cave in Kentucky.

Her longest zip has been a 731-metre span, in Indiana of all places, and her highest was 137-metres above ground. Fastest was the zippety-do-dah at Chelan, Wash., where she went nearly 96 kph.

Austin obviously loves the sport of zipping. She's 60 but age is no problem. And she likes other zippers, as zipline afficionados surely must be called.

"You never meet a depressed group on a zipline tour," she told the Pilot. "People that zipline are fun to be around and the guides have the best job in the world."

New hotel gets nod, and old one upgraded

PARK CITY, Utah — Hotel construction is surging. After considering whether to build a complex of offices, retail and restaurants, a development company called PC Venture Partners instead sought — and has now received — permission to build a 120-room hotel.

Local authorities like it, because they expect to make more money, reports The Park Record. "Tax revenues for a hotel are much more reliable than the projected values of office, retail or restaurant," said Alison Weyher, economic development specialist with Summit County. "You get sales tax, transient room tax and property tax from a hotel."

Meanwhile, in Steamboat Springs, megahotel owner Starwood will have invested $16 million in upgrading the Sheraton Steamboat Resort by year's end. The Steamboat Pilot reports the latest gussie-ups include a snowmelt system for the pool deck and all the hotel's entryways and two stone outdoor fireplaces.

TELLURIDE, Colo. — Ski bumming is supposedly a thing of the past, but what do you call the lifestyle of just-barely-getting-by in a mountain town?

In a story about the soon-to-take-effect Obamacare, i.e. the Affordable Care Act, the Telluride Daily Planet uses "ski bums" to describe many people in Telluride. If hotly disputed by Republicans, the law will help those locals, says a local official.

"I think it will affect a lot of other people in Telluride in their 20s, 30s, 40s," said Allan Gerstle, director of social services for San Miguel County.

He described them as single people who have enough jobs to pay rent, but not enough money to buy health insurance. Many of them will be eligible for expanded Medicaid.

Beginning Jan. 1, people earning up to 138 per cent of the federal poverty level may be eligible for Medicaid. In Colorado, the state's new health insurance marketplace opens Oct. 1.

Gerstle said that one feature of Colorado's marketplace is that people up to 29 can purchase minimum plans that cover emergency health care, but usually come with high deductibles. These plans could be a perfect fit for the young and active Telluride population, he said.