Much more than the Games this winter 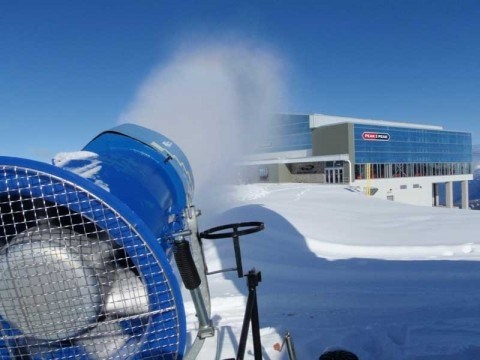 The Olympic aversion effect - visitors tending to avoid cities and mountain resorts hosting the Games because of concerns about costs and construction - is very real, and has been well-documented in host destinations for decades.

Whistler Blackcomb is aware of the issue and is entering the season with adjusted expectations, and has taken steps to size their workforce accordingly. However, Whistler Blackcomb is not conceding anything yet, and over the summer has invested in a wide variety of upgrades and improvements not necessarily related to the Olympics, from summer grooming to allow runs to open with less snow to significant upgrades to snowmaking.

They also kicked off the season by offering the lowest early bird season pass prices in a decade - down to $1,099 from $1,529 last season - as well as discounts on everything from Spirit passes to Edge Cards.

"We've been quite successful with our season pass initiatives, and at this point we've sold more passes than we sold in the prior year," said Stuart Rempel, senior vice president of sales and marketing for Whistler Blackcomb.

"We talked a lot about value and the people who are our most loyal guests, and we came up with a better price point... recognizing that it's going to be a challenging year in some ways, there would be access challenges and parking challenges. But our pass holders are connected to the resort, and will find ways to utilize public transportation and get to the lifts."

Whistler Blackcomb is pushing the message that it is 100 per cent open before and after the Games, and that 90 per cent of terrain on Whistler and Blackcomb is open during the Games. But there are some real challenges, with access to the day skier lots in the Village and Creekside limited through the season and closed off completely from Feb. 1 to March 26. The Creekside Gondola will be closed to the public from Feb. 1 to March 1, and there will be priority loading for Paralympic athletes until March 26.

The resort will be at, or close to, capacity during the Olympics and Paralympics, although many of those visitors won't be here to ski or snowboard. Rempel said efforts are being made to attract those visitors up the mountains.

"It would be a shame if people came here from around the world and didn't get to experience why Whistler is the number one resort in the world," said Rempel.

"For people who come to Whistler but don't have time to go skiing... we will be pushing Peak 2 Peak and the whole on-mountain sightseeing experience, we have special deals on rentals and all kinds of special offers for people that want to come up for a day or two. Also, we're seeing a lot of Games-related groups like sponsors coming in and booking instructors, lessons and lift packages, and equipment packages as well because there will be people here that want to ski but maybe didn't bring their skis with them."

Still, with most residents working or volunteering during the Games Whistler Blackcomb is pushing the idea that February will be an opportunity for skiers and riders to enjoy the mountains with few others - especially on powder days.

Whistler Blackcomb has also made improvements in a number of areas over the summer. There's nothing on the scale of a Symphony Chair or the Peak 2 Peak Gondola, and guests may not notice all of the changes, but investments were made in a number of areas.

Whistler Blackcomb has doubled its snowmaking staff, mainly to ensure that alpine courses are ready for the 2010 Olympic and Paralympic Games. Typically the department would hire approximately 26 workers for the start of the season, most of whom are laid off by January when Mother Nature takes over. Going into this season there are more than 50 snowmakers, working around the clock until the start of the Games. Crews are already at work at higher elevations, and roughly 60 snowguns were running this week.

The snow making machines on the downhill course at Whistler Creekside are all air-water machines. They were chosen to run up and down the course as they allow snow to be made even if it is as warm as -2 C.

Crews will be working to make dense snow so that the race surface is fast and hard. That way the last racer gets the same experience as the first racer.

"It comes down to the snowmaker adjusting how much water is going out," said NaTai Perdue of the snow maintenance crew.

"If you want a harder race product you put more water out and if you want to keep it dry and fluffy then you just put less water out."

The race courses will be set to go by New Years's Day 2010 and will be inspected by the International Skiing Federation (FIS) before the races.

Concerns have been voiced following the official announcement by the National Oceanic and Atmospheric Administration that this will be an El Nino year. That usually means a warmer and wetter winter. But, said Perdue, for Whistler it can mean a very snowy year.

• 39 million gallons of water is needed to cover the Olympic Downhill courses and the training runs.

• Snowmaking begins at -2 Celsius. As the temperature gets colder staff are able to put more water through each gun, making more snow in less time. Minus 15 Celsius provides maximum production out of each gun and they can continue to make snow well into the -20 C range.

• In 24 hours the snowmaking team can fill an NHL hockey rink to the top of the glass with snow.

• On average each year the snowmaking team turns 130 to 180 million+ gallons of water into 650 to 900 acres a foot deep of snow. Envision an American-sized football field covered in snow that is 650 feet high. That's the size of a 65 storey building.

• Whistler Blackcomb could fill GM Place three times over with snow each season.

While the Olympics are a priority, Rempel assures guests that snowmaking will also be enhanced outside the alpine venue, on both Whistler and Blackcomb.

"I know there's a rumour going around town that we won't be making as much snow outside the Olympics runs, and that's far from being the truth. We will be doing the normal amount of snowmaking in the alpine and on various runs... we've expanded our reservoir capacity and our pumping capabilities so we can do both quite easily."

(With files by Clare Ogilvie)

Several years ago Whistler Blackcomb partnered in a project to install a run-of-river hydro station on Fitzsimmons Creek, which is reaching completion and could be producing power sometime this fall. The project is a joint venture by Innergex Renewable Energy and Ledcor Power Group, but Whistler Blackcomb has been a "strategic partner," providing access, data and space in their tenure area, while encouraging the development of the project to offset their own power usage.

Once up and running, the project is expected to generate 33 gigawatt hours of power per year, which is equivalent to the power consumed by Whistler Blackcomb to run lifts, restaurants, snowguns, and other buildings and services. The project will produce maximum power during the spring and summer, when Whistler Blackcomb's demands are less. But on an annual basis the power produced and the power Whistler Blackcomb consumes are nearly the same.

"I look forward to the day this winter when we begin to generate power out of the Fitzsimmons Project," said Arthur De Jong, mountain planning and environmental resource manager for Whistler Blackcomb. "It has been a long and challenging road, and we've made great gains, but this project is still only one of many steps that we need to make to become truly sustainable."

Whistler Blackcomb has also overhauled electrical and heating systems in their alpine lodges to increase efficiency, although there has been an increase in demand as well with the addition of new lifts like the Peak 2 Peak Gondola.

Managing groups of young skiers can be challenging at times for instructors, especially when they are at different levels and can get separated. Add several other instructors in identical clothes, kids that are new and don't recognize their classmates, and kids can become separated from their groups from time to time.

To enhance safety Whistler Kids and the Ride Tribe ski school programs are introducing the FLAIK GPS tracking system that will be included on vests. If a child ever strays from his group an alarm will sound at ski school headquarters, which can contact the instructor by phone. As well, an instructor can use the program to track students.

Soon, parents will also be able to access the data to see where their kids skied on any given day, as well as data like how many vertical feet they covered.

New executive chef to shake up food and beverage

Whistler Blackcomb is perpetually tinkering with its menus and food service, with the occasional overall to shake things up. This year the focus is on fresh, regional ingredients, ranging from Pemberton potatoes, locally produced trans fat-free muffins, and brand products that are known for being organic or environmentally friendly.

Michael Crane, who works with Intrawest resorts to create menus, has come on board as the new executive chef for the season to continue the evolution.

Opening day is scheduled for Nov. 26 on both mountains, although earlier openings are always possible if weather, snow and conditions permit. Visit www.whistlerblackcomb.com for up to date information and snow reports.