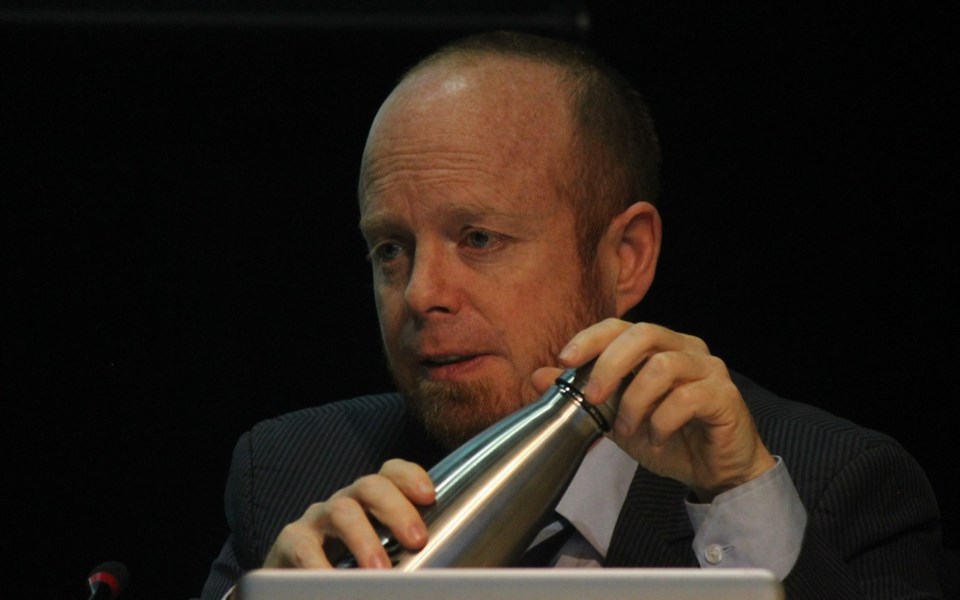 WATER WORRIES? Mayor Jack Crompton and the rest of council made a point of showing off their water bottles—full of Whistler's tap water—before the Dec. 17 council meeting. Photo by Braden Dupuis

The Resort Municipality of Whistler (RMOW) is under fire for not taking steps to address its corrosive water following an investigative report by Star Vancouver, Global News and the University of British Columbia, which found that some homes had lead in their drinking water.

But Mayor Jack Crompton defended the municipality, saying that even given the results of the investigation, council won't deviate from its focus on making evidence-based decisions when it comes to drinking water.

"(Vancouver Coastal Health's) expertise is what is guiding decision-making for our municipality, and other municipalities," he said.

"And to be clear, VCH has not directed us to test water in homes or businesses for lead. If they were to direct us, we would do it."

The main message for homeowners on the coast is to flush their taps—or let the water run until it's cold—before drinking it.

"[The investigation] certainly has helped amplify the VCH message that community members should flush their taps before drinking, [and] it amplifies the message that flushing taps works," Crompton said, when asked for his reaction to the analysis.

"We've worked hard to get this message out through information in tax notices, social media, newsletters, video, but this story really helps amplify the message."

As part of the Star-Global-UBC investigation, reporters collected water samples from 10 homes, two hotels and one Airbnb property and had them tested for lead.

"All of the samples contained traces of lead and seven contained lead levels exceeding Health Canada's guideline of five parts per billion (ppb). In addition, samples collected from one hotel room and another home rented through Airbnb also exceeded the recommended federal limit," a story published by the outlets read, in part.

Seven of the homes tested were built before 1976, while three were built in the '90s.

The highest lead levels were found on "first draw" sampling—done without running the taps or flushing the pipes of a system first.

Though lead levels did tend to drop after flushing, lab tests showed lead was still present in some flushed samples, according to the research done for the investigation.

However, all the homes registered below 5 ppb (the federal guideline level) in testing after flushing their taps.

The provincial Ministry of Health said it cannot confirm if the testing follows provincial guidelines.

"This type of random testing does not reflect actual exposures and while there is no safe level of lead and lower is better, lead in water is a global issue and it is present in low levels in the environment and it is not possible to eliminate it completely," a spokesperson said.

While Whistler's water meets all of VCH's operational guidelines, corrosive water can leach metals like lead and copper from plumbing fixtures, as was the case in the Village of Pemberton (VOP) in 2016 (see Pique, March-April 2016).

"Very few people have been diagnosed with elevated lead levels in [the VCH] region. None of those cases we have identified have ever been linked to contaminated drinking water," a VCH spokesperson said, adding that there have also been no reported cases of children adversely affected by lead in drinking water in the region.

"The [RMOW] is serviced by two water distribution systems, neither of which have any lead supply lines that we are aware of. Tests show that the water distributed by the RMOW is below the maximum acceptable level for lead and safe for consumption for all ages."

The wellbeing of guests and colleagues is the Fairmont's top priority, and it is committed to providing them with safe amenities, said public relations manager Lindsay Magrane, in an email.

"We rely on the RMOW and VCH to test and monitor our water supply, and past results have not indicated any cause for concern," Magrane said.

"Based on the findings of these most recent tests, we will work with a reputable third-party laboratory to conduct an evaluation of the water quality at the hotel, and take action as necessary based on the results."

The RMOW tests its water at 24 locations in the distribution system every second week, and said it meets or exceeds all federal and provincial drinking water standards. Under the Drinking Water Protection Act, municipalities are required to deliver water within those standards to the property lines of homeowners.

"Once water leaves the public distribution system and enters a private residence, those pipes are the responsibility of the individual homeowners. Some pipes and fixtures in older homes may contain lead," the VCH spokesperson said.

A report, which was already underway, will come to council in early 2020 with potential solutions.

"At a high level, [the report is] looking at how we manage the water—in pH (one of 15 factors that contribute to the corrosivity of water) and other aspects of our water—and the implications of getting into managing that and looking at potentially adding things to our water ... and what are the outcomes for that, and what are the costs," said chief administrative officer Mike Furey.

The total costs aren't known at this point, but it won't be cheap—in 2017, the VOP installed a soda-ash conditioning system to treat its water and raise the pH at a total cost of $862,079.

But where the VOP has just one water treatment facility, the RMOW has eight, Furey said.

"So it's not a simple solution ... there's a lot of smart people that have been looking at this for quite a long time, and it requires a lot of research, and it's probably going to be ongoing research," he said, adding that in Pemberton, even after installing the soda-ash system, the municipality is still following the VCH recommendation to flush the pipes before drinking the water.

While the RMOW follows VCH's suggestions for its water, was there any urgency to be proactive about the problem given the knowledge of corrosivity and the situation in Pemberton in 2016?

"The discussion around that time was 'how are we meeting what VCH has set out in their order?' Which we were," Furey said, adding that RMOW staff has "a lot of interaction" with VCH on its water.

"This is part of their daily job of testing the water, so while the originator of this recent round of investigative reporting is looking at this sort of fresh, this has been something we do on a daily basis and take very seriously."

Asked to weigh in on the investigation, Lauren Everest, Tourism Whistler's senior manager of corporate and member communications, said the organization recommends that any visitors who have questions about Whistler's drinking water visit www.whistler.ca/water.

"As per the RMOW's recommendation, we will be advising visitors that flushing taps until the water runs cold is the most effective step anyone can take if there is any concern about exposure to lead in drinking water," Everest said in an email.

"Tourism Whistler encourages everyone in Whistler to continue to drink tap water that has been flushed and not to switch to bottled water, which contributes to plastic waste."

It's hard to say how widespread the issue of corrosion is in Whistler. In 2016, University of British Columbia Civil Engineering professor Loretta Li began a study looking into corrosion in the water system, but the RMOW said the study was cut short in 2017 after a federal grant fell through.

Pique has written extensively about corrosive water—and what it can do to plumbing fixtures—over the past three years. Catch up on some of Pique’s reporting on the issue using these links:

No plan to test at the taps of B.C. homeowners, province says

FOI on lead in water comes up blank