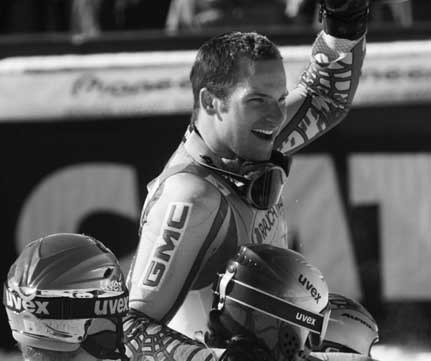 Mike Janyk is an up-and-coming star on the World Cup Circuit. Photo submitted

When commentators refer to “Whistler’s Mike Janyk” in the future, they won’t only be referring to the 24-year-old skier’s hometown.

On Wednesday, Jan. 24, the RMOW announced that it would be sponsoring Janyk, a member of the Canadian Alpine Ski Team and an up and coming star on the World Cup circuit.

As of Jan. 13, the day the agreement came into effect, the resort municipality’s logo will be front and centre on Janyk’s helmet, toques, and other headgear for races, training, and interviews. Janyk will also make personal appearances at RMOW events, and include links to the municipal website from www.mikejanyk.com .

There’s no question that Janyk is having a breakout season with the national team. He has a silver medal and two top-10 results to his credit in World Cup slalom, and is currently ranked fourth in the slalom standings.

“I am excited to start this partnership with Whistler,” said Janyk, who is in Austria preparing for this weekend’s races at Kitzbuhel. “The support I’ve received over the years from the community has been special to me — from the coaches at the Whistler Mountain Ski Club, and the teachers at Whistler Secondary, the businesses in town, my parents and friends, and many others from the community. I’m truly honoured to be an ambassador around the world for the town and the community I love.”

The RMOW could not say how much the sponsorship is worth due to the terms of the contract, but confirmed that part of the deal will be providing financial support to Janyk. According to the RMOW, the money for the sponsorship will be generated through the True Local licensing and merchandising initiative that was recently launched by the municipality and Tourism Whistler.

This is the first time that the RMOW has sponsored an athlete, and there are no immediate plans to extend the sponsorship to include other athletes. Whistler-Blackcomb, one of the RMOW’s and Tourism Whistler’s partners in Events Whistler, has sponsored athletes in the past. Tourism Whistler was also a head-gear sponsor of World Cup ski racers Willy Raine and Edith Rozsa in the early 1990s.